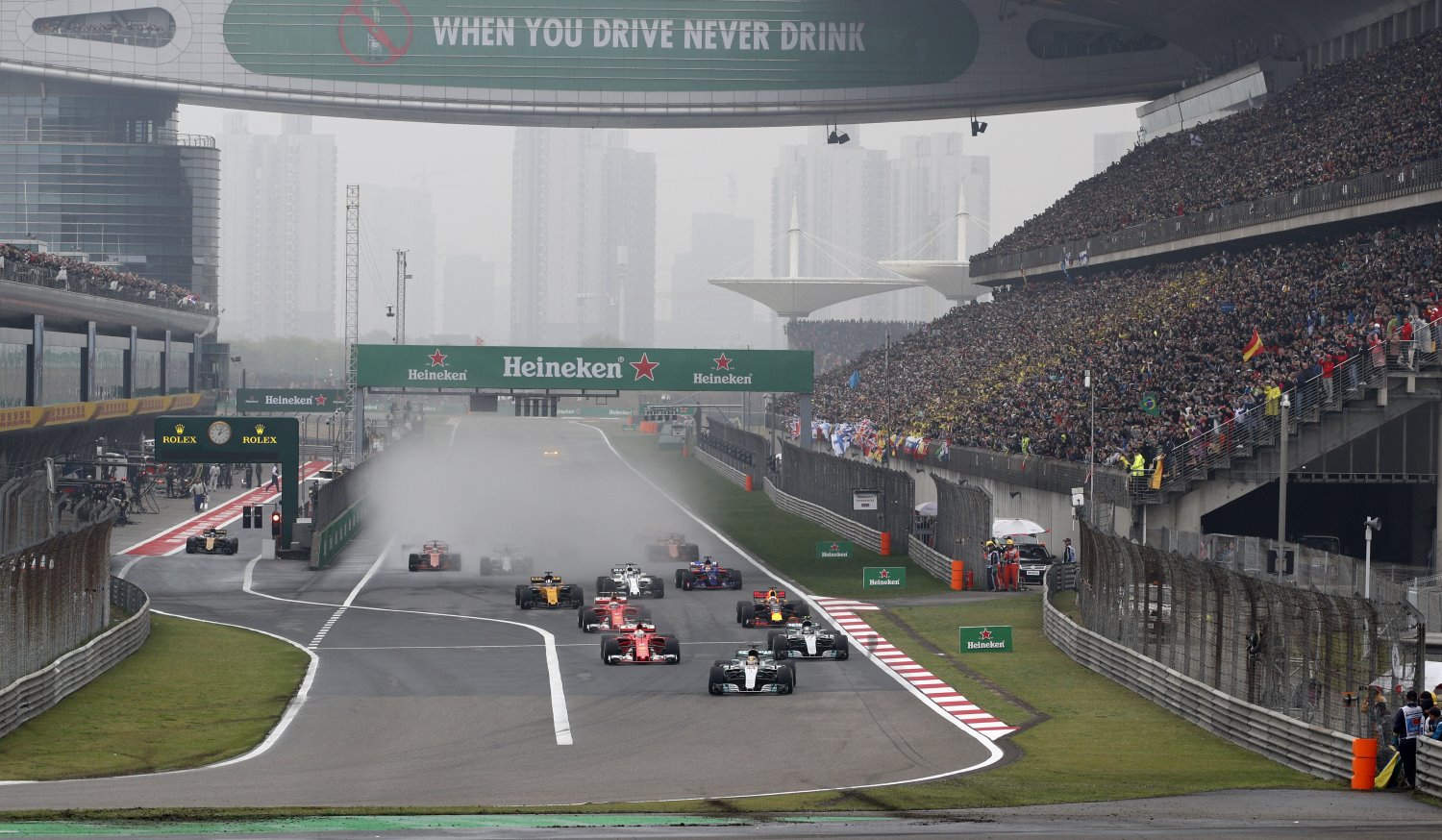 F1 close to new China GP deal – Bratches
(GMM) F1 is closing in on a deal to keep the sport in China.

Earlier, a provisional calendar for 2018 listed both the Shanghai event as well as the popular night race in Singapore as provisional.

"We've been working hard with the promoter and we've got an agreement in principle," he told AFP news agency.

"My suspicion is that it will be executed by the end of next month. Next year the schedule will be released and there will be nothing provisional about Shanghai because we will have a long-term deal," Bratches added.

Less is known about a new deal for Singapore, but Bratches said work is going on behind the scenes to add more street races in Asia.

"I'm spending a lot of time reaching out proactively to cities and think ultimately we will realize more street races than we have seen historically," he said in Shanghai.

Asked if he was talking about Asian races in particular, he confirmed: "Yes, two."

(GMM) Kimi Raikkonen says he and Ferrari are "happy" to have reached a new deal for 2018.

The Italian team on Tuesday ended a period of speculation by announcing that the Finn will stay at Ferrari next year.

"We started discussing it at a late stage and quickly agreed. It did not take long to think about it," Raikkonen said at a sponsor event in Helsinki.

"I have known about it for some time but only now read it in the newspaper."

It is believed Raikkonen's deal is a precursor to Ferrari also retaining its de-facto 'number 1' driver Sebastian Vettel for 2018.

"I would not have signed it if I wasn't enjoying it and I didn't have a good cooperation with the team and the people," said Raikkonen.

The 2007 world champion, who will turn 39 during the course of the 2018 season, said he did not mind that the new deal is for one year only.

"At this point it's good to take one season at a time," he is quoted by the broadcaster MTV.

Raikkonen also said the agreement will have no impact on his focus on this year's calendar.

"It does not matter one way or another if there is another contract or not. I always try my best," he insisted.

And he said he is also not relieved that the speculation about his future will die down for now, insisting: "Probably in a month's time they will begin speculating about the next one."

Finally, Raikkonen was asked about the controversial 'Halo' safety innovation, which will be mandatory in 2018.

"New rules and parts always seem very different but quickly they are forgotten about," he said.

"The Halo is a good thing if it saves someone's life or stops something bad from happening."

That is the view of former F1 driver Mika Salo, speaking after his Finnish countryman Raikkonen's new contract for 2018 was announced.

"This was the expected news," Salo, who raced for Ferrari almost 20 years ago, told the Finnish broadcaster MTV.

"Ferrari had no better option. And Kimi would not have continued if he doesn't believe his pace is still there."

Many insiders, including Salo, also believe that Raikkonen staying with Ferrari is a precursor to a new contract between Ferrari and the team's de-facto 'number 1' driver Sebastian Vettel.

"There's not really any other place for Vettel," Salo said. "And I believe Raikkonen staying was one of Vettel's demands.

Salo, 50, also said the fact Raikkonen's 2018 deal has been agreed quite early is good news for the 37-year-old.

"I hope he is able to be right there from the beginning of the season," he said. "For some reason, the Ferrari cars have not been great for Kimi from the very start of a season."

Renault will bring software and hardware updates to the Belgian and Italian Grands Prix, as it pushes to close the gap to rival power unit manufacturers.

Renault is still lagging behind Mercedes and Ferrari in Formula 1's engine battle, having spent time overcoming reliability issues early in the season.

But while a major upgrade has been ruled out in 2017, Renault engine chief Remi Taffin outlined further tweaks for the next two races, with "more things in the pipeline".

"We are looking at Monza as a benchmark as it could provide a clear picture of the ranking of the engines.

"Being in the top 10 will be a good result as these next two circuits are power-hungry.

"After Monza, we have more races and more things in the pipeline, the next two months will be important for the 2017 season outcome."

Taffin made clear that Renault continues to "give close attention" to reliability, though expressed optimism over the progress made so far.

"We know we're not the fastest on the grid, but as a team we are showing we are the force after the top three," he commented.

"Qualifying pace has looked good, with Britain and Hungary exemplifying our ability to be the fourth best team.

"It's just a case of building on that and bettering the race pace.

"That comes from levelling up everything, we need to show off reliability and mileage and that is something we are giving close attention.

"We are on a good trend and we will keep adding performance in terms of both aerodynamics and engine so hopefully this can be seen in the upcoming races."

Renault sits back in eighth position in the championship standings, but is only 15 points away from fifth-placed Williams, in a tight midfield fight.

Haas to start with Brembo brakes at Spa

Haas has endured persistent brake issues since entering Formula 1 in 2016, particularly on Grosjean's car, and called on Carbon Industrie to provide an alternative.

At the British Grand Prix, Grosjean ran with updated CI brakes, having tested both options in practice, while team-mate Magnussen stuck with Brembo's offering.

Haas carried out further tests at the Hungaroring, which is harder on brakes than Silverstone, and will move back to Brembos on both VF-17s at Spa-Francorchamps.

"At Spa we will be running Brembos to start off with and then we will see, but the plan at the moment is to run Brembos," said Steiner, when asked for a brake update.

Steiner added that he expects another tight midfield battle at the back-to-back Belgian and Italian events, with Haas locked in a four-team scrap for fifth in the standings.

"Right now, it seems teams like Renault and McLaren have made gains, but maybe it is track specific. Nobody really knows. Everyone is speculating and I don't want to make a speculation.

"We will do the best job we can in all of these circumstances, try to keep our heads in front of the people behind us and try to catch up to some in front.

"Everybody is trying to do the best they can and we will do the same."

Haas is set to introduce its next car update at the United States Grand Prix.

Guy Martin to Join Williams Martini Racing Pit Crew for the Belgian GP
Motorcycle racer and TV personality, Guy Martin, is set to take on one of the most coveted job in motorsport – working as part of an elite Formula One pit crew.

With no Formula One experience to his name, Guy will be going in at the deep end when he joins WILLIAMS MARTINI RACING, one of the world’s leading Formula One teams, at this weekend’s Belgian Grand Prix in Spa.

A truck mechanic by trade, Guy will visit Williams’ UK base ahead of the Belgian GP, where the team will run him through the major tasks he’ll be expected to perform during the race weekend.

Having forged a successful career motorcycling, Guy knows only too well how the race result is in the mechanics’ hands, so practice is essential.

During the race weekend, Guy will be tasked with helping to set up the garage before assisting the car crew build the FW40 car. Guy will proceed to work two 90-minute practice sessions on Friday, a further hour practice session on Saturday before a three-stage qualifying session and then the race itself.

The pit crew look after both of Williams’ drivers – Felipe Massa and Lance Stroll – and every pitstop is crucial. Guy will be working with the fastest team in the business, with the team having set the fastest pitstop of the season so far at just 2.02-seconds during the British Grand Prix.

After the race, as the drivers head for the nearest airport, a whole new day of work begins for the mechanics. It takes at least 10 hours to strip the cars, take down the garage, and pack everything away, ready to be transported to the next race. Guy will, of course, stay to the end.

Robert Kubica "delivered well" on his official Formula 1 test return at the Hungaroring earlier this month, according to Renault chief Cyril Abiteboul.

Kubica, having already driven a 2012 car with Renault at Valencia and Paul Ricard, sampled 2017-spec machinery for the first time at the post-Hungarian Grand Prix test.

He displayed impressive consistency and pace, working through stints of varying lengths, and ended the day with more than two race distances to his name (142 laps).

Kubica's best lap of 1:18.572, posted on the Ultra Soft tire, put him fourth out of 13 drivers, just under 1.5 seconds adrift of pace-setting Ferrari man Sebastian Vettel.

Official comments on Kubica's test performance have been limited, but Abiteboul addressed the outing in Renault's pre-race notes for this weekend's Belgian Grand Prix.

"[It] was a very productive day from all involved," said Abiteboul, who previously stated that Kubica was given the test "to assess his capabilities to return to the highest level of competition".

"Robert's journey back to an official test session is an incredible story and he delivered well on the day.

"He followed test driver Nicholas Latifi, with both drivers contributing to our development of the car. Both Nico [HÃ¼lkenberg] and Jolyon [Palmer] should benefit from the progress made."

Kubica vowed to remain "very, very realistic" over his chances of a full-time return following the test, with no word yet as to whether he will get another run in an F1 car.