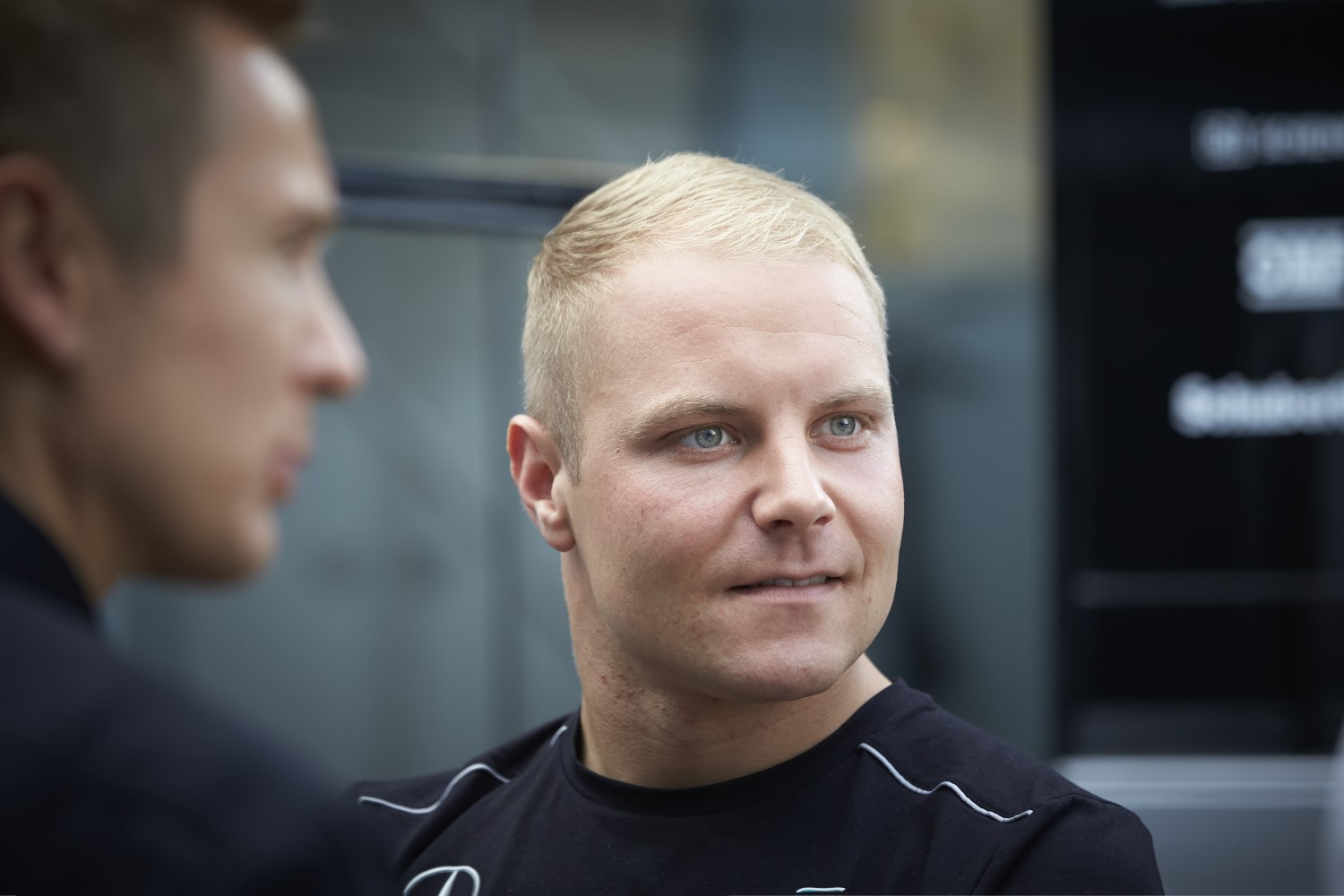 That is the view of the Finn's Mercedes predecessor, Nico Rosberg.

Rosberg suddenly quit at the end of last season, plunging Mercedes into a desperate search to replace him.

The German admits his decision might have hurt Mercedes.

"I wouldn't exactly say that," he told Auto Bild, "but of course my departure was difficult for them, especially with the new regulations."

Indeed, Mercedes started 2017 on the back foot, but Rosberg noted: "It's nothing against Ferrari, but they were able to start with their new car much earlier.

"So that was their advantage. But Mercedes is still very, very strong — when you look at the car, the level of detail is just amazing."

Rosberg also said he has been impressed with Mercedes' choice to replace him — the former Williams driver and Toto Wolff protege, Bottas.

"I'm really impressed," he said. "He might be the perfect driver mentally because he is able to just concentrate on himself, making him consistent and fast."

Indeed, while the media is focused on the Lewis Hamilton versus Sebastian Vettel dichotomy, Bottas has been plugging away and is only a race win away from that title battle.

As for the high-profile Hamilton vs Vettel battle, Bottas smiled: "That is perfectly ok for me! I have no desire to be the center of attention.

"It means I can just concentrate on my job."

(GMM) While most focus on the aesthetics, it is another feature of the controversial 'Halo' system that might actually have a more significant impact on F1.

The fact the carbon-titanium cockpit protection system will be mandatory on all cars next year has sparked a furious debate.

But while some rail against the questionable aesthetics of the 'flip flop'-like addition over the traditional open cockpit, another major consideration is the 10-plus kilograms that 'Halo' weighs.

Indeed, the Swiss newspaper Blick reports that with the cars already weighing a hefty 728kg this year, the mandatory minimum weight will only increase by 5kg next year to accommodate Halo.

"Does that mean the drivers will have to lose the other 5 kilograms?" the report wondered.

Lewis Hamilton admits: "You cannot ignore Halo if it improves safety by 17 per cent. It just doesn't look good and the extra weight isn't good either."

Carlos Sainz added: "We should not have to be as slim as cyclists just because of the cars."

F1 legend Niki Lauda even thinks Halo "destroys the DNA" of formula one, but Valtteri Bottas does not quite agree with his Mercedes boss.

"I don't think Halo will hurt formula one," said the Finn.

"It is a safety improvement like so many others in the history of the sport, which is good for us drivers," he told Auto Bild.

"The only drawback is the extra weight, because the heavier the cars are, the less exciting they are."

Haas development driver Santino Ferrucci labelled 2017 Formula 1 machinery "a bit scary at times", following his first run out in the VF-17 at the Hungaroring last week.

Ferrucci, 19, joined Haas at the start of 2016 and piloted the squad's VF-16 at Silverstone, alongside his maiden campaign in the GP3 series.

Ferrucci stepped up to Formula 2 for Hungary, cutting short his GP3 stint, after which he sampled Haas' 2017 car, carrying out duties on both in-season test days.

The American youngster admitted he adopted a cautious approach at times, but felt he made progress over the course of his time in the car.

"Everything is a massive step, GP3 to F2 was huge," he said.

"It was an experience, to get in [the F1] car, I was just getting used to the brakes in F2, in F1 the braking point is roughly the same, it wasn't that big a step.

"What's more of a step is the high speed, the F1 car is just nothing like anything [else].

"You're carrying 30 or 40 km/h more in every turn, from fourth and fifth gear [corners] upwards, and that's the hardest part to get used to."

Ferrucci expanded on his progress, commenting: "With low-speed and mid-speed I'm pretty sure I'm really on the limit, or within a km/h or two.

"The problem is though, when you find that limit, when you lose the car, you just kind of hit the brakes and hold on and try and keep it out of the way.

"This car on the limit, it can be a bit scary at times, so in the high-speed I prefer to just back off a few km/h and lose a tenth and be safe rather than risk it every lap."

Alonso: "I'm much better than in title-winning years"

McLaren-Honda driver Fernando Alonso has described his 2017 season as "fantastic", despite his team's struggles, and feels he is a much better driver than in his title-winning years.

Alonso and McLaren anticipated a step forward this year but Honda's revised power unit has caused problems, amid a lack of performance and reliability, though recent updates have led to progress.

McLaren is above only Sauber in the Constructors' Championship, with Alonso holding 15th place in the Drivers' standings, courtesy of points in Azerbaijan and Hungary.

Despite the struggles, Alonso is pleased with his own performance, due to the revised regulations, his exploits at the Indianapolis 500, and the success of his kart circuit in Spain.

"As a team we cannot be happy with the season so far," Alonso said.

"We were making it to Q3 normally last year, in ninth [or] 10th; that was our average position, while this year we struggle a little bit more.

"On the personal side it has been a very, very good season for me.

"With 2017 cars I'm able to drive back again to my driving style, I felt much, much more competitive than in previous years, I'm feeling competitive out on track.

"I had the Indy 500, which was a very nice experience, my go-kart circuit is going great, it's fantastic, so a fantastic first half of the season."

Alonso, who turned 36 during the Hungarian Grand Prix, explained that he has had to adapt his training methods as he gets older, but feels that any loss is countered by greater experience.

"I think that physically it's not helping… you have more discipline of the things you do, have to prepare your training in a more precise way," said Alonso of getting older.

"You have to recover longer than what you used to do, playing football or tennis on a Wednesday or Thursday before a Grand Prix is now not any more possible as you have little pain here or there for Sunday.

"You learn how to prepare yourself for the race etcetera.

"Mentally, I think you are more prepared, you have more experience.

"So putting the two things together, I think I'm much better today than 10 years ago."

Toto Wolff: Ferrari did not show its 'real' pace in Hungary

Toto Wolff is convinced Ferrari did not show its "real pace" at the Hungarian Grand Prix, despite out-performing Mercedes and claiming a one-two finish.

Having secured a front-row lock-out in qualifying, the Scuderia went on to complete its second one-two finish of the season in Hungary, as championship leader Sebastian Vettel led home teammate Kimi Raikkonen to extend his advantage in the title race to 14 points heading into Formula One's summer break.

Vettel had to contend with steering issues throughout the race and at times appeared to be lacking pace, but held on to take his fourth win of 2017 even though he came under pressure from Raikkonen — who acted as rear gunner to ensure Ferrari's result — and the Mercedes duo in the closing stages. A wary Wolff believes Vettel's problems hid Ferrari's true race pace.

"I don't think we have seen their pace because Sebastian's car was clearly damaged with the steering wheel hanging to the left and you can see that after Sebastian pitted when Kimi was in free air, he was setting very fast sector times.

"If they would have left [Vettel] out [Raikkonen] probably would have overtaken. Equally, although Verstappen was on a newer tire he was catching up a lot and somebody told me that Alonso was doing the quickest lap time of the race so I don't think we have seen the real Ferrari pace, it was a damaged car."