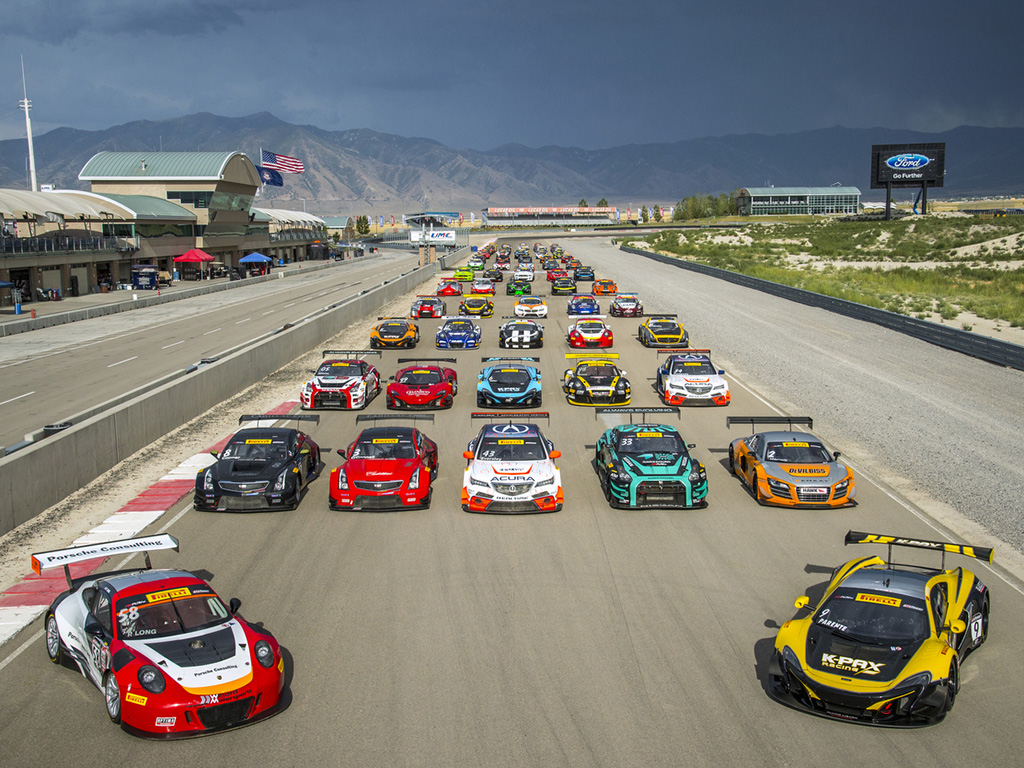 Featuring a variety of racing machines from the lightning quick GT3 sports cars in SprintX to the “Muscle Cars" of the GTS/GT4 category to the closest thing to the street cars in the multi-classes Touring Cars, the doubleheader weekend brings the one of the biggest contingents of road racing vehicles to the popular Utah racing facility. Already in 2017, the Pirelli World Challenge has been represented by 25 auto makes and 44 different models.

Rounds 7 and 8 of the highly-competitive SprintX division have 33 two-driver entries in a pair of 60-minute main events on Saturday (Aug. 12) and Sunday (Aug. 13) with three separate divisions – Pro/Pro, Pro/Am and Am/Am – featuring many of the world’s best sports cars such as Acura, Aston Martin, Audi, Bentley, Cadillac, Ferrari, Lamborghini, McLaren, Mercedes, Nissan and Porsche.

Along with the SprintX action, the Touring Car categories – TC, TCA and TCB – will have a superb field of 50 cars on the Utah Motorsports Campus road course at the same time with dual 40-minute contests on Saturday. The 32-car TC field brings a tremendous group of equipment from Audi, BMW, Honda, Lotus, Mazda, Nissan and Porsche.

All Pirelli World Challenge races this weekend will be live streamed on www.motortrendondemand.com and www.world-challenge.com, and six feature races (SprintX, GTS and TC) will be broadcast on CBS Sports Network; the SprintX doubleheader will be shown on CBS Sports Network on Aug. 20 at 2:30 p.m. EDT, while GTS will be televised on Aug. 23 at 9 p.m. and TC on Aug. 23 at 8 p.m. EDT.

Sports cars such as Acura, Audi, Aston Martin, Bentley, Cadillac, Ferrari, Lamborghini, McLaren, Mercedes, Nissan and Porsche will do battle and the competition is expected to be as fierce as in the earlier rounds at VIRginia International Raceway, Canadian Tire Motorsport Park and Lime Rock Park.

With the Mid-Ohio GT Sprint races dominated by defending GT champion Alvaro Parente of Portugal in his No. 9 K-PAX Racing McLaren 650S, the Overall GT point title has tightened.

2011 PWC GT champion Patrick Long of Manhattan Beach, Calif., currently holds a three-point margin over Cadillac’s Michael Cooper of Syosset, N.Y., 223 to 220, with Parente at 217 in the current Overall GT standings. The Overall GT championship consists of 19 races in both the GT Sprint and GT SprintX classes.

The same three battled down to the wire for last year’s PWC GT title with Parente, Long and Cooper finishing 1-2-3. With five SprintX races and two GT Sprint events remaining on the Pirelli World Challenge schedule, the top three figure to be in the mix for the 2017 Overall GT crown.

At Utah this weekend, Long, a three-time winner in 2017, will match up with endurance sports car star JÃ¶rg Bergmeister of Germany in the SprintX doubleheader with Cooper teaming up with Jordan Taylor of Orlando, Fla., in the No. 8 Cadillac Racing Cadillac ATS-V.R. Cooper and Taylor captured the CTMP Round 3 SprintX event and the Cadillac pair currently lead the GT SprintX Pro/Pro class points with 107.

Parente, a four-time GT Sprint race winner this year, will pair up with young open-wheel star Ben Barnicoat of England in the No. 9 K-PAX Racing McLaren 650S this weekend at Utah.

With the three GT overall point leaders leading the 32-car lineup at Utah, other GT SprintX challengers include 2017 SprintX race winners: VIR winners and second in SprintX points, Ryan Dalziel of Scotland and Daniel Morad of Canada in the No. 2 CRP Racing/DeVilbiss Mercedes-AMG GT3, VIR winner Daniel Mancinelli of Italy and Niccolo Schiro also of Italy in the No. 31 TR3 Racing Ferrari 488 GT3; and the Lime Rock winning car, No. 4 Magnus Racing Audi RS 8 LMS of Pierre Kaffer of Germany and Spencer Pumpelly of Atlanta.

Another very competitive category at Utah will be the Pro/Am SprintX class and point leaders Jan Heylen of Tampa, Fla., and Michael Schein of Glen Cove, N.Y. in the No. 16 Wright Motorsports Porsche 911 GT3 R have won three races already in 2017. Heylen and Schein must be favorites Saturday and Sunday but the list of contenders is large and led by VIR winners Jeroen Bleekemolen of Monaco and Tim Pappas of Boston, Mass., in the No. 54 Black Swan Racing Mercedes-AMG GT3: the CTMP-winning No. 14 Porsche 911 GT3 R of James Sofronas of Villa Park, Calif., and series newcomer Mathieu Jaminet of France; local favorites John Potter of Salt Lake City, Utah, and Marco Seefried of Austria in the No. 44 Magnus Racing Audi RS8 LMS and another Utah-based team of Aaron Povoledo of Toronto and David Askew of Salt Lake City in the No. 63 DXDT Racing Mercedes-AMG GT3.

Former GTA class champion Frankie Montecalvo of Highlands, N.J., and his driving partner Ricardo Sanchez of Mexico in the No. 75 Always Evolving/AIM Autosport Nissan GT-R Nismo GT3 could be a Pro/Am threat at Utah after winning two poles already in 2017. Other Pro/Am contenders include former GT Cup champion Alec Udell of The Woodlands, Tex., and two-time Utah SprintX winner Preston Calvert of Potomac, Md., in the No. 77 Calvert Dynamics/Euroworld/GMG Porsche 911 GT3 R; former Formula One racer Will Stevens of England and Andrew Kim of South Korea in No. 78 Absolute Racing Bentley Continental GT3; and Cedric Sbirrazzuoli of Monaco and Lawrence Degeorge of Jupiter, Fla., in the No. 07 Dream Racing Motorsports Lamborghini Huracan GT3.

Expected to challenge for the GT Am-Am division honors are class point leader Henrique Cisneros of Miami, Fla., and Jonathon Ziegelman of Delray Beach, Fla., in the No. 30 MOMO/NGT Racing Ferrari 458 GT3; the No. 013 R. Ferri Motorsports Ferrari 458 GT3 entry of Kris Wilson of Littleton, Colo., and Drew Regitz of Denver, Colo., second in the Am/Am standings; and James Dayson of Vancouver, B.C., Can., and GTSA regular Jason Bell of Tampa, Fla., in the No. 23 M1GT Racing Audi R8 LMS Ultra.

The exciting door-to-door, bumper-to-bumper action of GTS competition has made the category fun for Pirelli World Challenge fans and the Utah weekend should supply the same in Rounds 13 and 14 for GTS presented by Case-It.

Leading the GTS division is current point leader Lawson Aschenbach of Palm Beach Gardens, Fla., who won his first GTS race of the 2017 season recently at Mid-Ohio. The two-time GTS champion holds a healthy point lead (87 points) entering the Utah weekend in the No. 10 Blackdog Speed Shop Chevrolet Camaro GT4R. Aschenbach has been consistent through the first 12 races this year including 11 podium showings.

The Flying Lizard Motorsports duo of Spain’s Rodrigo Baptista and 17-year-old Nate Stacy of Owasso, Okla., will be among the challengers this weekend to Aschenbach with their No. 3 and No. 14 Flying Lizard Porsche Cayman Clubsport MR sports cars, respectively. Baptista is a two-time winner in 2017.

The leading race winner in GTS this year is the personable Ian James of Paradise Valley, Ariz., in the popular No. 50 Team Panoz Racing Panoz Avezzano GT after scoring victories at Road America (two wins) and Mid-Ohio. James currently ranks second in the GTS standings.

Former GTS race winner Martin Barkey of Huntsville, Ont., in the No. 80 MBRP Performance Exhaust KTM Xbow could be a factor in both GTS race at Utah and veteran PWC racer Jeff Courtney of Milwaukee, Wis., brings his popular No. 99 Kenda/RecStuff.com Maserati GT4 this weekend in search of victory lane.

In the GTS Am class, the hottest driver has been entrepreneur George Kurtz of Paradise Valley, Ariz., with five consecutive victories in his No. 04 CrowdStrike/GMG McLaren 570S sports car and Kurtz has now taken over the class point lead.

The GTS presented by Case-It events will be 50-minute sprint contests on Friday and Saturday.

There is little doubt that some of the best racing happens in the 2017 Pirelli World Challenge Touring Car division and after the first six rounds of competition that trend is expected to continue this weekend at Utah Motorsports Campus.

The new Audi RS3 LMS Club Sport has shown a quick pace, especially with the talented Paul Holton behind the wheel. Holton, the TC Rounds 1 and 3 winner, comes to Utah as the class point leader in the No. 71 C360R Audi RS3 LMS Club Sport. Holton, who has been competing in Touring Cars in Europe recently, holds a 45-point margin over veteran Nick Wittmer in the No. 91 ST Racing/GPI Inc./Laurel BMW of Westmont, Ill., BWM M235iR.

In addition to Wittmer’s BMW sedan in TC this year, a strong group of BWM M235iR cars are prepared to do battle at Utah led by defending TC class champion, Toby Grahovec of Celina, Tex., in the No. 1 Classic BMW Motorsports BMW M235iR.

Contending with Grahovec will be VIR TC Round 2 winner Greg Liefooghe, in the No. 20 ART Racing/Steve Cameron Racing BMW M235iR as well as Wittmer’s teammate, college student Samantha Tan of Gormley, Ont., Canada, in the No. 38 ST Racing/GPI Inc./Laurel BMW of Westmont, Ill., BWM M235iR.

Other top contenders this weekend in TC will be the Florida-based Shea Racing brings popular team owner/driver Shea Holbrook of Orlando in her Honda Accord. Holbrook, a six-time PWC race winner, has been busy in the off-season with a four-car operation (two in TC, two TCA) but figures to be a challenger in the popular No. 67 Bubba Burgers/Lucas Oil Honda Accord.

TC ‘Rookie of the Year" Anthony Geraci, of Glen Cove, N.Y., won a pole position at VIR in the new No. 69 S.A.C. Racing Audi RS3 LMS Club Sport sedan and will be in the hunt at UMC. Young (age 19) Mason Filippi of Alamo, Calif., comes to Utah after a TC victory in CTMP in his No. 12 Winding Road Team BMW M235iR.

Defending TCA series champion Elivan Goulart of Shelton, Conn., in the No. 70 S.A.C. Racing/SCDA1.com Mazda MX–5, was dominant in 2016 with five of 12 TCA races and 12 top-five placings. Now, after another strong performance at Lime Rock in May, Goulart takes the TCA point lead into Utah Motorsports Campus by just six over his S.A.C. Racing teammate Matthew Fassnacht of Madison, N.J., in the No. 74 S.A.C. Racing Mazda MX-5 Cup.

Goulart has totaled 140 points to Fassnacht’s 134 coming to the TCA doubleheader this weekend.

Fassnacht, last year's TCA Rookie of the Year, won twice at VIR for his first two PWC feature wins of his racing career.

Touring Car B–Spec or TCB is the most cost-effective class but the competition supplies some of the most popular door–to–door racing and bumper-to-bumper drafting in all of the Pirelli World Challenge series.

Coming off a double TCB win weekend at Lime Rock Park, young Canaan O’Connell, son of four-time PWC GT champion Johnny O’Connell, returns to Utah just a year after his pro debut in the No. 24 Tech Sport Racing Chevrolet Sonic. O’Connell has moved into third in the TCB standings behind leaders Jake Pipal and Canadian P.J. Groenke. Canaan has three TCB victories in 2017.

Groenke of Richmond Hill, Ont., raced O’Gorman right down to the final race before settling for second in the 2016 championship. Groenke scored six podium (top-three) finishes and ten top-five placements in 2016. He’ll drive the No. 25 Tech Sport Racing Chevrolet Sonic this weekend at Utah Motorsports Campus.

Pipal, the 19-year-old from Oakdale, Calif., has enjoyed a good year thus far with his Jake Pipal Racing/Carbotech Brakes Mazda 2 with two wins and consistent runs in the other events.

Qualifying: (All times listed are MDT)

Television (on CBS Sports Network): All times listed re: CBS broadcasts are Eastern.