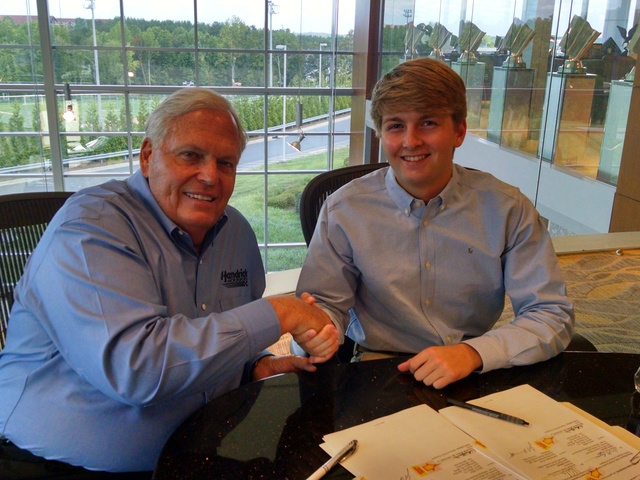 CHARLOTTE, N.C. – Hendrick Motorsports announced today that William Byron will pilot the No. 5 Hendrick Motorsports Chevrolet in the 2018 MONSTER ENERGY NASCAR CUP SERIES, replacing Kasey Kahne. Byron is the second young driver announced as part of the organization’s four-car lineup for 2018, joining Alex Bowman, who takes over for Dale Earnhardt Jr. in the No. 88 Chevrolet, Chase Elliott and seven-time champion Jimmie Johnson.

Below are quotes from FOX NASCAR play-by-play announcer Mike Joy, NASCAR RACE HUB co-host and FOX Sports announcer Adam Alexander and analysts Larry McReynolds and Darrell Waltrip regarding the Byron announcement and the changing of the guard at Hendrick Motorsports.

On reaction to the news and whether William Byron is ready for a full-time MONSTER ENERGY NASCAR CUP SERIES ride:

“That’s almost a question that can’t be answered until he climbs into the race car and gets some races under his belt. It seems he figures out every type of car quickly and adapts immediately. My biggest question is whether Hendrick and the team are ready for Byron. They’re a little behind over there, and the numbers support that."

“When a driver is winning regularly at the level he is racing in, it’s hard to argue against a move up."

“I think he’s ready. You learn at the level at which you’re going to compete, and Byron has shown himself a quick learner. Plus, he fits the Hendrick mold. He has that corporate look – a nice, polite, good-looking young man who fits right in with what Rick (Hendrick) likes and is looking for."

“Byron is ready to move up. When you look at the success young drivers are having and add that to the talent Byron brings, it's a no brainer. Two rookies made the playoffs last year. Daniel Suarez and Erik Jones have competed at a high level this year. Byron fits the same mold."

On the last time a powerhouse organization had so many major driver changes within a couple of seasons:

“We’d probably have to look back years ago at Roush-Fenway Racing to find the last time there was such a major shift in the driver lineup at a high-profile organization. Other than Mark Martin, they had a lot of cars with a lot of turnover back in the ‘90s."

“I don’t know that I can recall the last time such a major team underwent so many major driver changes in succession. But Hendrick Motorsports is a rarity because they field four cars, so there are more drivers to potentially change out. However, it’s hard to believe that just three years ago, Jeff Gordon, Dale Earnhardt Jr. and Kasey Kahne made up 75-percent of the organization’s lineup, and in 2018, they all will be gone. I don’t think we saw all that coming."

On William Byron as a driver:

“I’ve known William since he garaged next to my son, Scott, in Legends cars at Charlotte Motor Speedway's Summer Shootout series a few years ago. He’s always been a great talent, running at or near the front, not overdriving or tearing up his equipment. He will be a great asset to the Cup Series in its search for a younger demo."

“When I heard Byron had signed with Hendrick a year ago, I immediately thought ‘What a perfect fit.’ He checks every box when you look at the ‘Hendrick way.’ He's a big time talent. His on-track ability reminds me of (Jeff) Gordon and (Jimmie) Johnson. He always maximizes what the car has to offer and never beats himself. Off track, he is a model citizen and handles himself like a true gentleman."

On the young driver lineup at Hendrick Motorsports as a possible sign of things to come in the Cup Series:

“Rick (Hendrick) has always been the leader in the youth movement. He ushered it in with Jeff Gordon and he’s doing it again now. He will have three young guys under the wing of Jimmie Johnson, who is a great mentor. Plus, it’s that time in our sport — that crossroads. It’s the changing of the guard, and you can’t change the guard without someone to hand it off to. There are a lot of talented young drivers ready to step up."

“The Hendrick lineup absolutely is a sign of things to come in the Cup Series. As Dale Jr. explained so well in his press conference at Watkins Glen, a new generation of hungry young talent is waiting to take charge. Driver supply and demand makes this a team owner’s market, and with sponsor dollars scarce, it creates a great opportunity for owners to balance their checkbooks yet be competitive."

“It’s the business model we are headed toward. It’s not all about talent anymore — it’s also about dollars. Of course, a top Cup owner won’t take someone who can’t perform and stick them in a car just because they’re cheaper. But if you can hire William Byron, Alex Bowman, Daniel Suarez or Erik Jones for significantly less money than you are paying Matt Kenseth or Kasey Kahne or Dale Earnhardt Jr., and they can also perform, it’s not hard to make that decision given today’s business and sponsor platform. It's a trend that will continue. Are the veterans worth a lot of money? Hell yeah. They’ve proven they can win races and championships. If Jay Cutler can go to the Miami Dolphins for $10 million for one year to throw interceptions weekend after weekend, then the veteran Cup guys are worth that or more. But the business model isn’t there anymore."

“The youth movement is on, and the trend will not change anytime soon. These young drivers are talented, and it's becoming impossible to keep them out of the Cup Series. They also are budget friendly for their owners."

On what would be considered a successful season for Byron and Alex Bowman in 2018:

“Several top-five finishes and a good helping of top 10s and/or making the playoffs would be a great year for Byron and Bowman next season."

“While Rick (Hendrick) is looking at drivers, there may be some other changes he could make as far as what crew chiefs fit best with what drivers. The No. 5 hasn’t been all that competitive, and changing the driver doesn’t necessarily mean you will change the outcome, unless you make another swap to go with that. It’s cause and effect. With a new driver coming in, it might be time to think about a different lineup when it comes to crew chiefs and crews."

“The worst thing you can do for a rookie in the Cup Series, regardless of his credentials, is set expectations. It’s the toughest series in all of motorsports. The only expectation I would set for him is to run all the laps and see where he finishes. Halfway through the season, it might be easier to set expectations for the rest of the year."