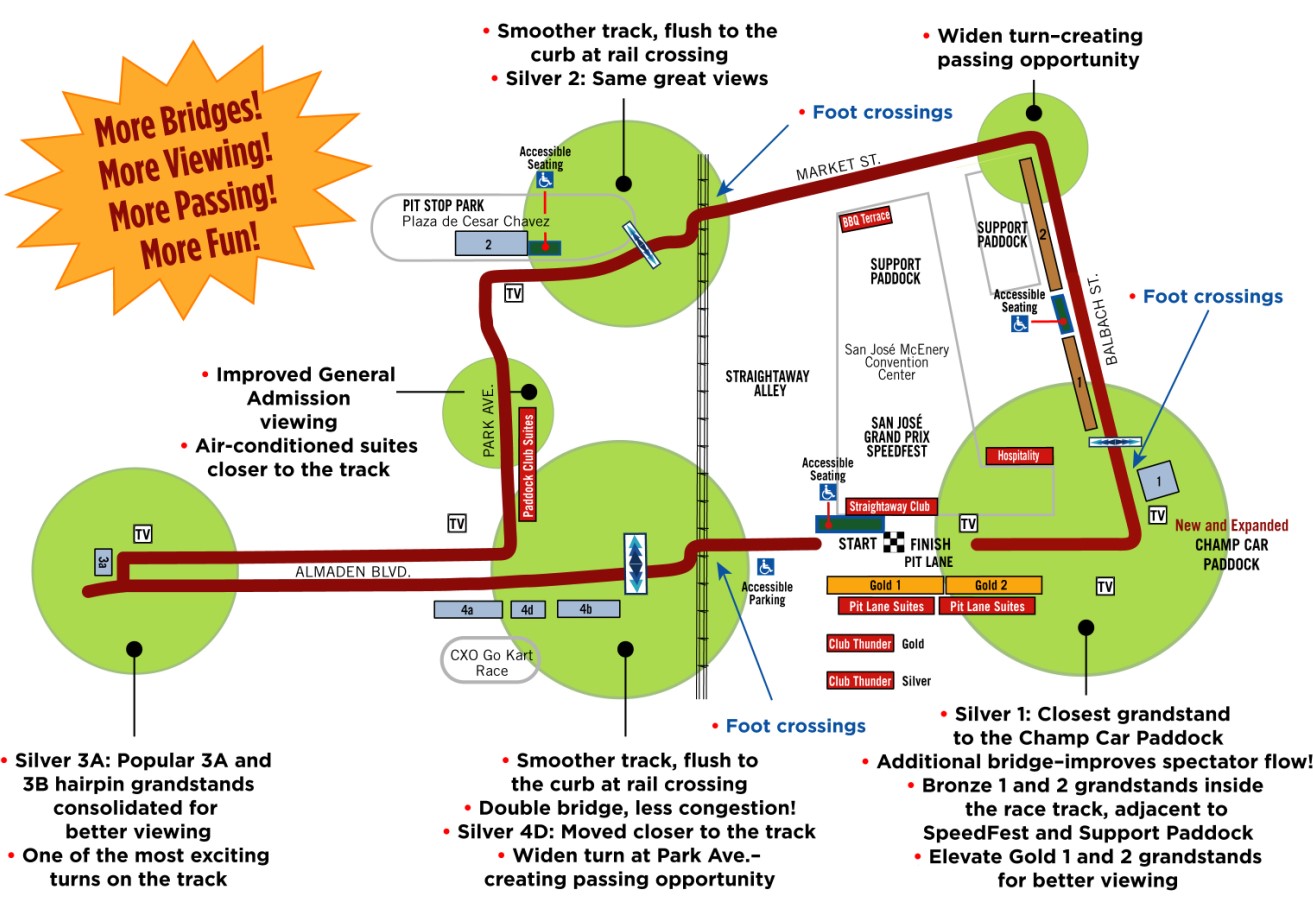 UPDATE #2 At last night's meeting in San Jose, the 2nd one in as many days, Bob Singleton acknowledged there were problems. “Did we make mistakes? No question,'' he told the crowd. “But as you tell your kids, you learn from your mistakes.''

The biggest one was having too aggressive a schedule for putting up the concrete blocks and fencing that created the track because organizers wanted to minimize the disruption to downtown streets, Singleton said. “We tried to do this event in four weeks, and three weeks into it, we realized we needed five or six,'' he said.

More than one question came up about the course itself. Among the complaints drivers had was that it was too narrow to allow for any passing, making more for a parade than a competitive race.

Initially reluctant to talk about possible course changes, Singleton eventually did talk about creating three passing zones. Two could be accomplished by widening existing turns at Almaden Boulevard and Park Avenue and at Market street and Balbach streets.

The third would involve a left turn where Park intersects with Market, taking the race north of Plaza de Cesar Chavez before heading south again in front of the Fairmont. “That might be a good way to go,'' Singleton said, trying to be non-committal. (See Image to right with possible track reconfiguration that Singleton refers to.)

08/17/05 The San Jose Grand Prix Association hosted the first of two scheduled post race meetings Tuesday night in downtown San Jose. In attendance was the entire SJGP staff including VP Bob Singleton, who addressed the assembled crowd on the overwhelming success of the inaugural Champ Car race and his plans to improve the concept for next year event.

Some of the many issues that Singleton reported on was that the circuit would continue to remain in its current location, with push for more grandstand seating, while improving on the general admission viewing areas. (They will need to revise circuit layout as we show below)

Look for a solution to the light rail track issue and the widening of both sides of the Turn 3 hairpin corner. Other areas of concern are making more room for the Champ Cars through the Turn 4 through 6 sector, as well as widening the entire course where possible.

Many of the residents expressed concern that the use of the advertising and green banners were interfering with the site lines, which Bob and his staff were fully aware of. Singleton will also tackle the crowd control problem with 2-lane-wide bridges and much more "track crossing areas" to help facilitate access throughout the circuit grounds.

Look for the reduction in the amount of events next year, due to time issues with the possible demise of the US Touring Car Championship, but on a positive note Singleton also expressed an interest of possibly bringing in the Historic Formula One cars in addition to highly touted Historic Stock Cars which brought much local color to the event. Earlier there had been talk of hosting a full blown "Drifting event" for 2006, but with the time constraints the Drifting will continue as a exhibition event similar to this year's show.

I was truly impressed with the support and praise that the residents expressed to the entire Grand Prix staff as well as the city reps which helped to make this race the "new" showcase event of San Jose.

For the record the SJGP staff started plans for next year's event the Monday following the '05 event and in our mind there's nobody more qualified to supervise this massive project than Don Listwin, Dale Jantzen, Bob Singleton, Dave Rahn and Mike O'Kane and by the support shown by the city's residents it appears the 2006 version will be again "more than a race"!

Meeting number 2 is scheduled for the business community and will take place at The Tech Museum of Innovation on Weds, August 17. Paul Castoro, reporting from San Jose

Rumor has it that the 2005 Mickey Mouse San Jose track has been redesigned by Autoracing1.com (shown right) and should become the new San Jose circuit for 2006 and beyond. The new track measures almost exactly 1.7-miles in length (up from 1.44-miles), features two definite overtaking areas and eliminates most of the faults of the 2005 circuit. It's simple, clean and raceable.

What needs to be done for this track to be implemented?