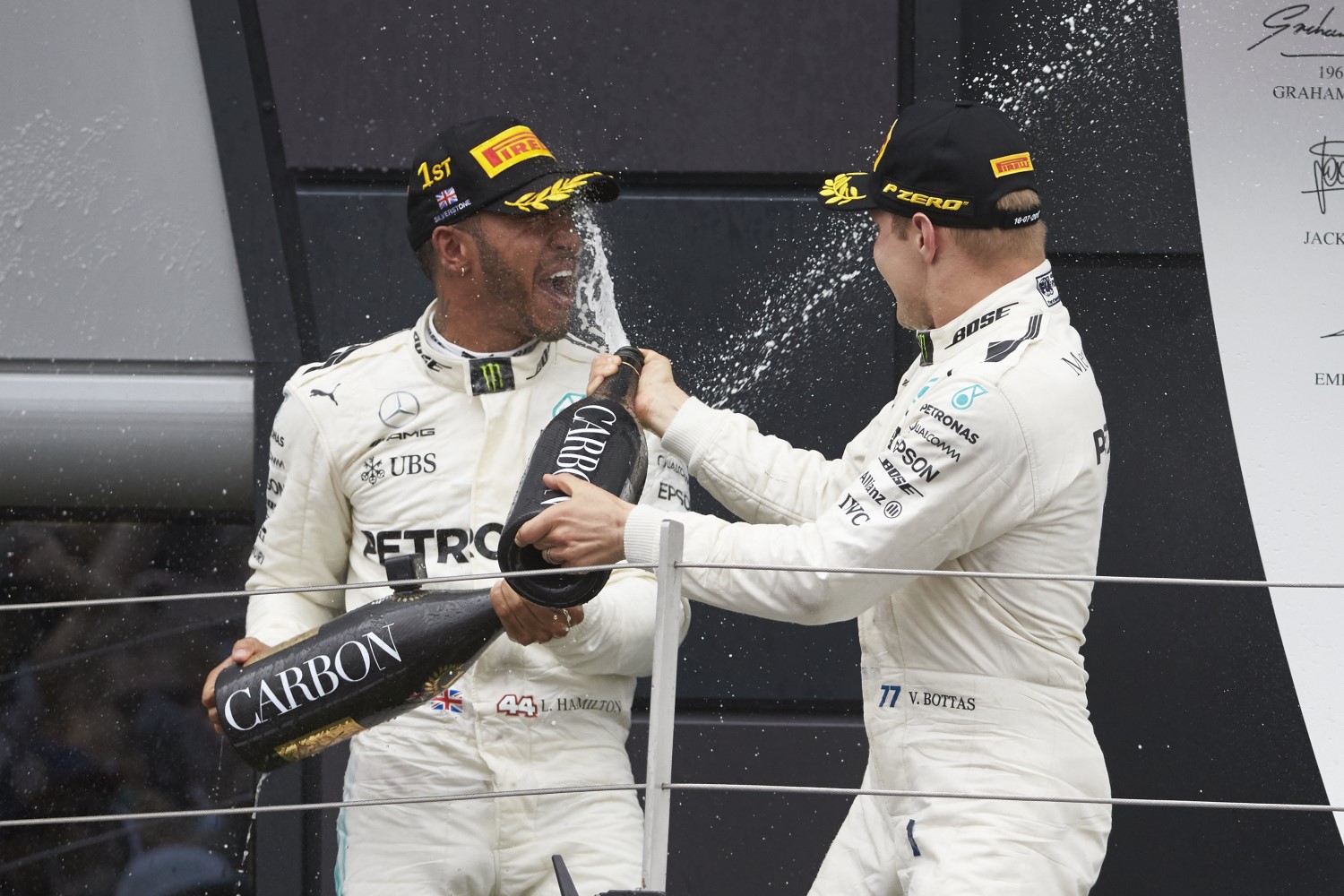 Champagne returns to F1 podium
(GMM) Champagne has returned to the F1 podium.

But the Washington Post reports that champagne is now back, with $3000 bottles of 'Carbon' sprayed into the crowd by Sebastian Vettel, Kimi Raikkonen and Valtteri Bottas in Hungary.

The newspaper reports that every bottle that will be sprayed on the podium from now on "is coated in the same carbon fiber that F1 cars are made of".

"For me, this has great symmetry with formula one," said Carbon Champagne boss Alexandre Mea.

F1's champagne history dates back to 1950, when after a grand prix in the Champagne region of France, a large bottle was presented to the winner.

But it was not until 1966 when, at Le Mans, Jo Siffert's accidentally shaken bottle was inadvertently sprayed into the crowd, starting the tradition.

There are claims McLaren and Honda will divorce, but the struggling Japanese marque's recently-launched 'spec 3' unit has been reliable so far and powered Fernando Alonso to the fastest race laptime in Hungary.

"I don't know if this is the end of the big reliability problems," said a McLaren source. "You never can be sure."

It is reported McLaren intends to make a decision about its next engine partner in September, but a few days before that, Honda's 'spec 4' will apparently make its bow at Spa-Francorchamps.

Marca sports newspaper said it will feature an extra 15 horse power, with another 40hp to come after that, getting the Honda to within 45hp of the leading Mercedes and Ferrari.

"We will see if Honda gives us another evolution after the summer. We need it," said team boss Eric Boullier.

(GMM) From the front to the back of the 2017 grid, the respective futures of three F1 drivers could take a step forward over the August break.

At the front, Valtteri Bottas' boss Toto Wolff has promised to think about a new deal for the Finn whilst sitting "on the beach".

Rumors suggest a further one-year contract, giving Mercedes the freedom to sign a top star like Fernando Alonso or Sebastian Vettel, is likely.

Bottas admits talks about 2018 are imminent.

"For sure we need to speak about what's going to happen soon," said the Finn.

"I have no idea about the future yet but the problem is that the mobile phone is not so good in the sauna," he joked. "It could take a while so don't expect anything in Spa."

His boss, Wolff, added: "The summer break is a good time for conversation and for thinking.

"We had good talks with Valtteri before Hungary, as I would like to fly to Asia for the last races with a decision."

Meanwhile, in the midfield, Sergio Perez admits he is hoping for a new Force India deal.

"I hope once I come to the next race after the summer break I can have a new contract," said the Mexican. "But you never know what will happen."

And finally, there are reports German backmarker Pascal Wehrlein will struggle to keep his Sauber cockpit for next year in the wake of the Swiss team's new Ferrari deal.

Wehrlein is backed by Mercedes, whose Wolff said when asked about the 22-year-old: "There are many movements on the market.

"In the next two weeks, a few interesting things could happen."

(GMM) Nico Hulkenberg has lashed back at Kevin Magnussen in the wake of their on and off-track stoushes in Hungary.

After the race, Hulkenberg interrupted a TV interview to call the Dane "the most unsporting driver in F1", only for Magnussen to now famously retort: "Suck my b-lls, mate".

In a column for German broadcaster Sport1, Renault driver Hulkenberg now hits back: "I wish people were as excited about the race as they are about our little skirmish.

"We have bigger challenges in F1 than the treatment of the testicles of a wannabe Verstappen," he added.

Hulkenberg said he was not surprised with Magnussen's driving or post-race behavior in Hungary, and former F1 driver Marc Surer agrees: "Magnussen is known for driving unfairly.

"I've heard a lot about him," he told the German broadcaster Sky.

The "suck my b-lls" interview was actually conducted by TV3 reporter Luna Christofi, who said: "Kevin dares to be who he is now, because he has the peace to perform.

"His team boss Gunther Steiner defended him, allowing Kevin to be himself. He was previously restrained as he fought for contracts and a place in formula one, but that's no longer the case," she added.

(GMM) F1 will on Wednesday get a clearer picture about the prospect of a return to the sport for Robert Kubica.

The Pole was watching the action during Tuesday's opening of the post-race test in Hungary, ahead of his turn in the 2017 Renault on Wednesday.

Now, the eyes of the F1 world will be watching the former Renault and BMW driver.

"He seems absolutely committed and firmly convinced about his comeback," he added.

Indeed, as photographers zoomed in on Kubica's permanently injured right arm on Tuesday, Kubica got FIA clearance to drive by passing the five-second cockpit evacuation test.

"I'm really happy that Robert is getting this opportunity and I'll keep an eye on how he goes," said Lewis Hamilton.

Dozens of Polish reporters have joined the ranks of media in Hungary for Kubica's test, but the 32-year-old said he is relaxed ahead of his big moment.

"I want to have fun and not any stress," he told veteran Blick correspondent Roger Benoit on Tuesday.

Max Verstappen, who was just a boy when Kubica last raced in F1, said: "I've heard a lot about Robert, that he was a fighter and above all very fast.

"I think all of us drivers wish him well. But some fast laps are different to 70 (laps), and only Robert can judge the situation after the test," he added.

Renault, however, is keen to play down the significance of Kubica's test, denying that he is a candidate to replace struggling Jolyon Palmer after the summer break.

"We want to help Robert on his road back and maybe open a door for him. There is no more," a source said.

Formula 1 is conducting two days of testing before entering the annual summer break, with teams staying on at the Hungaroring after the Hungarian Grand Prix. The planned Day 2 line-up.

Robert Kubica appeared in an official Formula 1 test session for the first time since 2011 when he rolled out of the pit lane in 2017-spec Renault machinery during in-season testing in Hungary on Wednesday.

Kubica competed in Formula 1 between 2006 and 2010 and battled for the 2008 title with BMW, winning the Canadian Grand Prix along the way.

He was regarded as one of the sport's finest talents, with Lewis Hamilton – an opponent during karting – praising Kubica's ability when reflecting last week.

Kubica had just carried out the first test of Renault's 2011 car when he sustained life-changing injures at the Ronde di Andora.

The most critical part of Kubica's injury – in terms of competing again – was the reduced mobility of his right arm, which required multiple operations.

Kubica remained out of the Formula 1 spotlight as he satiated his desire on the rallying arena, taking the WRC2 title in 2013, and impressed with his pure pace on the WRC stage.

Kubica also conducted some simulator work for Mercedes, tested a DTM car, and last year returned to competitive circuit racing, with a handful of outings in sportscar events.

He was scheduled to drive for the privateer ByKolles team in LMP1 this year but withdrew on the eve of the season, and instead carried out private tests in single-seater cars.

Kubica got back in the cockpit of a Formula 1 car in June, completing 115 laps in the 2012-spec E20, run by Renault, and spoke of his optimism, and also wistfully reflected on what he had missed.

The private running was intended as a favor to an old friend but Kubica impressed to the extent that a second outing, after a Goodwood demonstration run, was arranged at Paul Ricard.

Again, Kubica caught the eye, despite Renault management remaining coy on his abilities, and insisting that he was merely undergoing an evaluation process.

Kubica talked up his prospects of making a Formula 1 comeback and Renault duly announced that he would pilot the R.S.17 during the in-season test at the Hungaroring.

Hundreds of Polish have flocked to the circuit to witness their hero drive a current-spec Formula 1 car for the first time in six-and-a-half years.

Kubica hit the track shortly after 09:00 local time, surviving an early scare as he clipped the inside of the garage wall, surrounded by a mass of photographers.