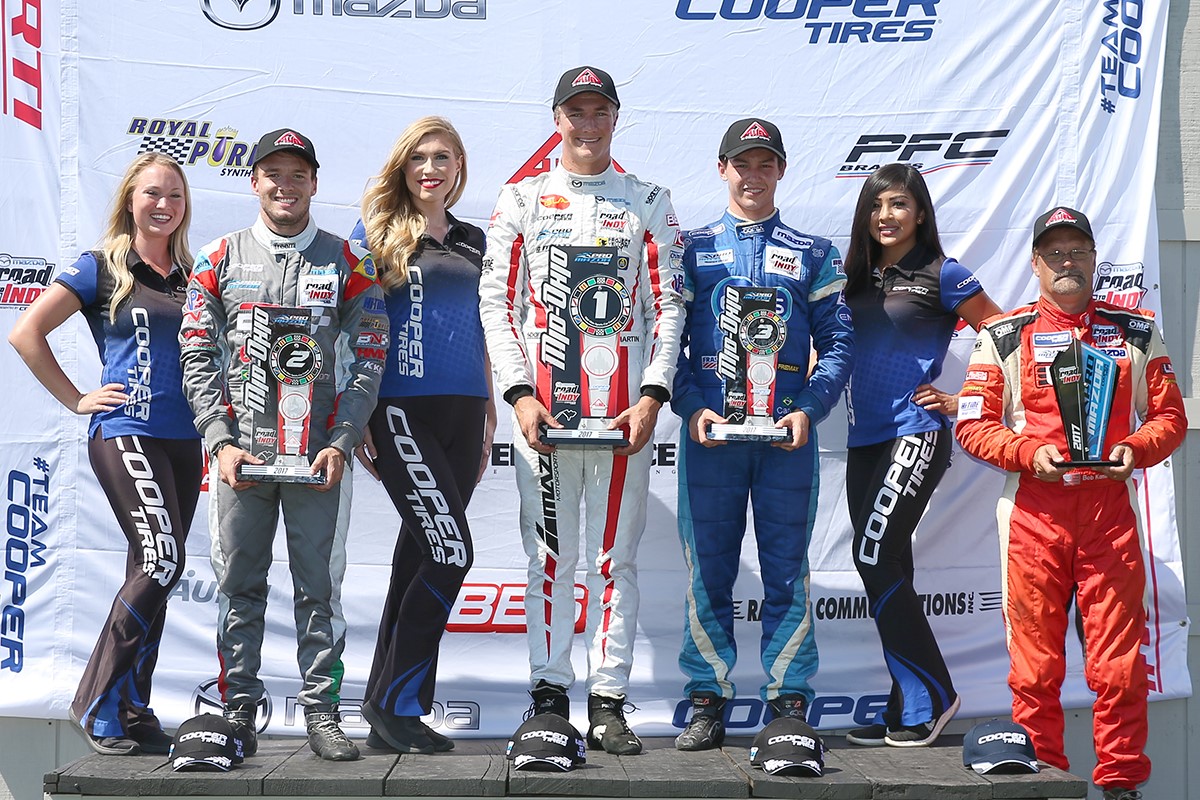 Anthony Martin enjoyed a picture perfect morning under a glorious blue sky at the Mid-Ohio Sports Car Course as he sped to an uncontested victory for Cape Motorsports in the third and final leg of the Cooper Tires Pro Mazda Grand Prix of Mid-Ohio Presented by Allied Building Products. The 22-year-old from Perth, Australia, led every inch of the way from pole position and added the fastest lap for good measure just one lap from the finish of today’s ninth round of the Pro Mazda Championship Presented by Cooper Tires.

Martin’s fifth win of the season vaulted him ahead of primary title rival Victor Franzoni, from Sao Paulo, Brazil, in their tussle for a Mazda Scholarship worth almost $800,000 to assist in the progression to Indy Lights Presented by Cooper Tires, the final step on the Mazda Road to Indy open-wheel development ladder, in 2018.

After being denied victory yesterday due to an incident with a slower car, Martin took off at the start this morning with one goal in mind: to win… by as big a margin as possible. He established a torrid pace and extended his lead with virtually every lap before finally crossing the finish line a commanding 13.9957 seconds clear of Franzoni, who had overtaken front row qualifier Cunha under braking for Turn Two on the opening lap but was never able to shake off his pursuer.

The trio of distinctive yellow Team Pelfrey cars ran in close formation for the first lap or so before TJ Fischer managed to find a way past fellow Los Angeles resident Nikita Lastochkin. Fischer settled into a relatively lonely fourth place until the closing stages, when the youngest driver in the field, 15-year-old Sting Ray Robb (World Speed Motorsports), from Payette, Idaho, began to loom larger in his mirrors.

Robb, who started sixth, overtook Lastochkin after seven laps, then reduced a deficit to Fischer of more than four seconds to just a few car lengths at the checkered flag during his most impressive performance of the season so far.

Robb’s teammate, Bobby Eberle, earned the Staubli Award after finishing sixth ahead of Max Hanratty (ArmsUp Motorsports), from Milwaukee, Wis., who secured the Quarter Master Hard Charger Award after rising from 11th on the grid.

Martin now leads Franzoni by four points, 259-255, as the title hopefuls head next to Gateway Motorsports Park for their only oval race of the season on August 26.

Under the direction of series officials, the cars of Martin, Franzoni and Fischer have been impounded for further evaluation to be performed in Indianapolis this week. This is an extension of the current inspection process. When completed, the procedure and outcome will be published. The results from today’s race will remain unofficial until that point.

Anthony Martin (#8 Mazda/Burgess BLA-Cape Motorsports): “I knew I had one job to do and that was to win the race. I was a little ticked off from yesterday so I might have had a little more aggression today, but I had to put what happened yesterday out of my mind – racing is racing and those things happen. I didn’t look behind me until the back straight, when the team told me that Victor was in second and that I needed to go. From there, it was head down. The Cape boys gave me a great car all weekend and it was almost a 100 percent successful weekend. It was great to see we could do it and that helps with three races to go. Pressure motivates me to do better and I think being on top makes me go faster so I’m confident going forward."

Victor Franzoni (#23 Juncos Racing): “I knew I had to get into second on the first lap and I did. We struggled a little bit today as the track changed so much, but we are second in the championship and it is still really close. We made what we could here – we weren’t fastest, but we won one and finished second in the other two. I can’t get too nervous but I like the adrenalin. I am taking it race by race and not thinking too much about the championship and that seems to be working. Whoever wins the next race will be leading the championship so I am focused on the oval now. Juncos Racing has so much oval experience, including racing in the Indy 500 this year, so I’m excited."