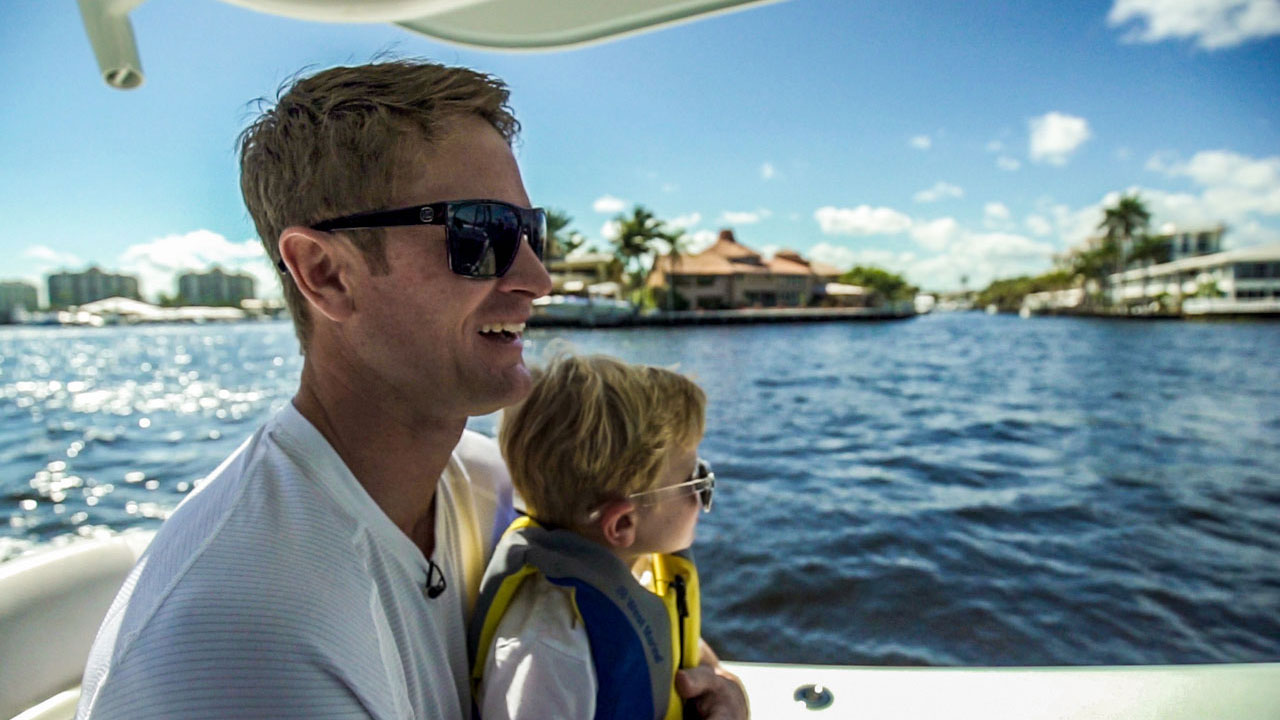 The latest boy toy of Ryan Hunter-Reay is a Bradenton, Florida built 42-foot Yellowfin with four Mercury Marine 350-horsepower engines. That’s 1,400 ponies for a top end of around 70 mph. The boat’s got a center console, a tower and will see lots and lots of fishing writes Doug Fernandes of the Sarasota Herald Tribune.

The winner of the 2014 Indianapolis 500 keeps his need for speed confined to the oval.

“I’ve always been on boats," he said. “It’s kind of my counter to the stress of the racing life."

There won’t be much stress for Hunter-Reay on Friday at Sarasota’s Marina Jack. Just a bunch of smiles, probably a few photo ops, and a chance for those so inclined to test drive boats from five major dealers.

The event runs from 10 a.m., to 4 p.m., and will be Hunter-Reay’s second appearance this year in the area. In March he arrived from his home in Fort Lauderdale to help Dick Vitale at his Mad for March event that raised money for the V Foundation for Cancer Research.

“It definitely hits home when you get to meet the kids and see how all the efforts have impacted the kids who are battling cancer," he said.

If necessary, Hunter-Reay might have hoofed it over from Lauderdale. After losing his mother in 2010 to colon cancer, he started his own foundation, Racing for Cancer, which promotes and encourages cancer awareness. Since its inception it’s generated more than $6 million. His car number 28 honors the estimated 28 million people living worldwide with the disease.

“I lost my mom to cancer," he said, “and if she just would have been proactive and gotten checked, she’d still be here being able to meet her grandchildren. That’s why we do what we do."

It’s pretty elementary why the 36-year-old does what he does. It started with Hunter-Reay kart racing, from there becoming a three-time U.S. Grand National champion and a nine-time WKA champion.

He loved something at which he excelled. Hunter-Reay’s career path was set.

“I knew this was what I wanted to do," he said. “I didn’t know if it would be possible. Obviously it’s a long road to get to the top, but the only thing I always thought about was racing."

His first victory came in 2008 at Watkins Glen. Hunter-Reay got further immersed in the spotlight after winning in 2012 the IndyCar Series championship, the first American to do so since Sam Hornish Jr. in 2006.

Two years later, the 98th Indianapolis 500 provided the occasion for worldwide recognition. LeAnn Rimes sang the national anthem, Mark Cuban served as the honorary starter, and Hunter-Reay, starting in the inside position on row 7, held off Helio Castroneves by 0.0600 seconds, the second-closest finish in race history.

“I had that goal, and it far surpassed any expectations," he said. “It was amazing. Life changing. It was just an incredible day in my life, I can say that.

“You (enter) a different category of drivers when you win the Indy 500. You join a list of some of the legends of our sport."

After winning the race once, the goal of every driver becomes winning it again. “You always want to be in that next class of driver," he said.

At this year’s race engine failure forced Hunter-Reay out after lap 136. Earlier this month he finished third at the Iowa Corn 300 and sixth at the Honda Indy Toronto. Currently 13th in the IndyCar Series standings with 273 points, Hunter-Reay trails leader Scott Dixon’s 423.

“It’s been a rough year for us," he said. “A lot of bad luck. Could have won the Indy 500 and had engine issues there, and Long Beach we were challenging for the win and retired there. It’s been one of those years that way."

That’s why he got the boat. Ryan Hunter-Reay’s seaborne stress reliever. Doug Fernandes of the Sarasota Herald Tribune