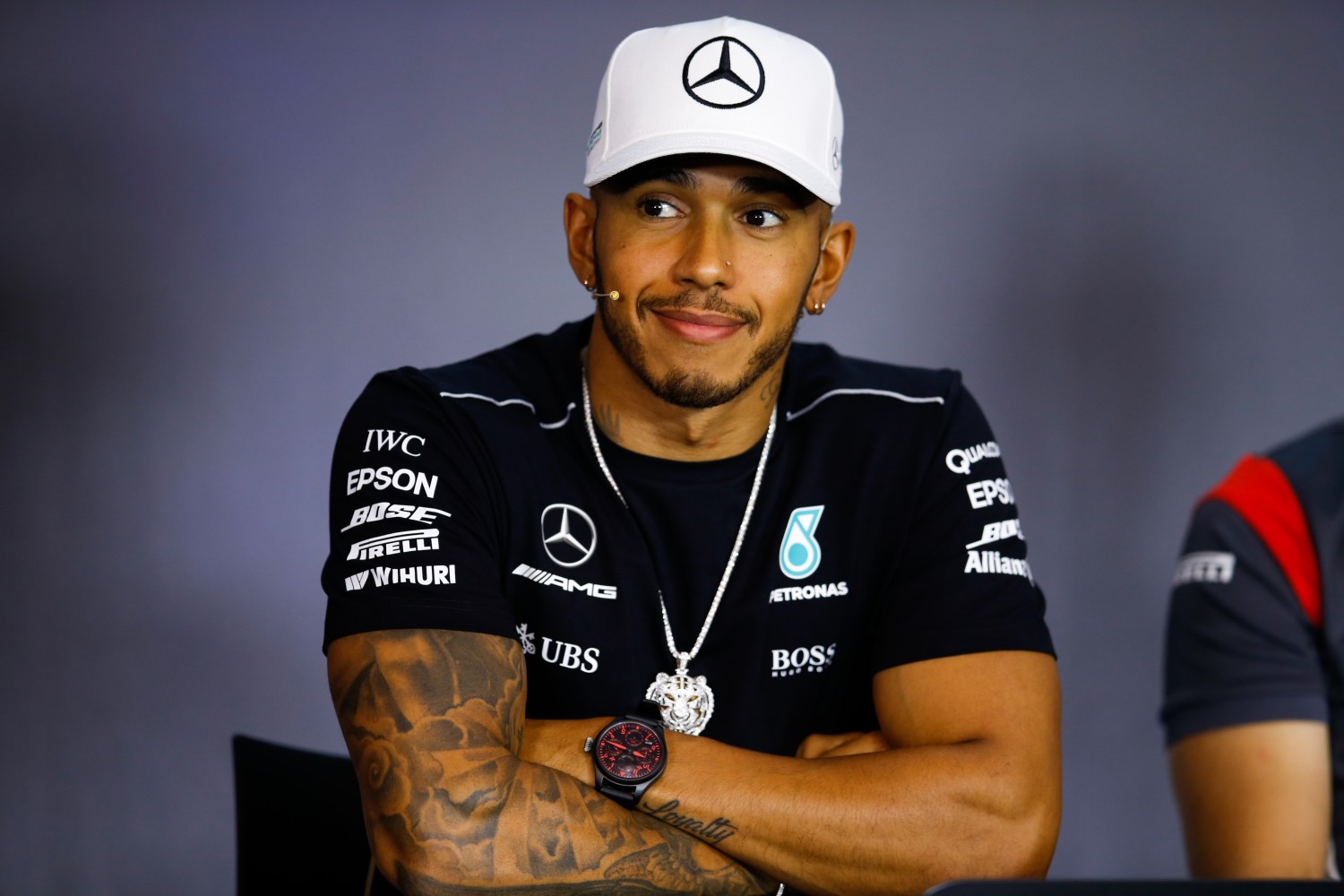 Wolff wants Hamilton to stay at Mercedes
(GMM) Toto Wolff says he is pushing Lewis Hamilton to commit to Mercedes beyond the end of next year.

After the British driver closed the championship gap to just a single point at Silverstone, Hamilton hinted to the media that he is not ruling out retirement.

"I love driving and you could say it's unlikely, but you can't say what frame of mind I will be in at Christmas," said the triple world champion.

But just as he revealed a 2018 deal for Valtteri Bottas is a "no brainer", Mercedes team boss Wolff also said he wants to keep Hamilton on board too.

"This is a very tough championship so we are concentrating on the weekends," he said, "but we are having a really good relationship and talking about the future.

"Lewis is very much linked to Mercedes, and we love him as a driver, and I think the same for us is valid for him. So we are going to try to find an agreement for the future," Wolff added.

And so amid the latest retirement rumors and talk of a potential post-2018 switch to Ferrari, Wolff said he thinks Hamilton is actually committed to Mercedes.

"He's in a very good place and he drives the fastest car at the moment," he said. "We have a contract that goes for one and a half more years and the best dynamic in the team, so all the talk outside has zero relevance for me."

(GMM) Italy's partisan media is worried the tide may have turned against Ferrari in its championship battle with Mercedes.

As Lewis Hamilton utterly dominated, Mercedes scored a one-two and Ferrari's drivers struggled to the finish with disintegrating Pirelli tires, the Italian press departed Silverstone concerned about the implications.

"Ferrari returns home with concern the British grand prix was perhaps the turning point in favor of Mercedes. The last three races were difficult but now the worries are bigger."

Corriere dello Sport agreed: "Ferrari is not going through a good phase.

"Mercedes has overcome its troubles while Ferrari's performance has gradually weakened. Maranello has to start from scratch again."

"They paid for deciding to go to the end with those tires," he is quoted by Ilta Sanomat. "It could have been foreseen that it would not work."

Sebastian Vettel warns against panic, but his biggest concern is the performance gap Mercedes is now able to pull out in qualifying.

"They can find three to six tenths to us on the straight, and we cannot do that," said the German.

"We're working on it, but it's not going to happen overnight," added Vettel.

Corriere della Sera, another Italian daily, thinks the 'oil in fuel' controversy has hurt Ferrari's performance, as has a more recent FIA ruling against the red car's flexible floor.

And the German press also thinks Vettel is rattled, having refused to give interviews to many television networks after his disappointing result in Britain.

However, Wolff has warned those who believe Mercedes is now clearly the 2017 favorite.

"The moment you say that, you go to the next race and get a shock," he said.

(GMM) Sebastian Vettel has no right to complain about dangerous driving.

That is the retort of Max Verstappen, after German Vettel's latest spate of fist-waving during the pair's on-track battle at Silverstone.

During the race, Verstappen said Vettel appeared to want to play "bumper cars", but afterwards it was the Ferrari driver questioning the other's tactics.

"He has more experience now and has become calmer," Vettel said, "but Max is still a little wild in his defending."

But Red Bull's Verstappen, 19, hit back by saying he did not take Vettel's complaint seriously, "Especially after what happened last time when he got penalty points on his license."

Verstappen was undoubtedly referring to Baku, whereafter Vettel was forced to apologize for deliberately steering into his championship rival Lewis Hamilton.

(GMM) Carlos Sainz Jr. has now joined those playing down his chances of switching teams ahead of the Hungarian grand prix next weekend.

Tension is clearly high between the Toro Rosso driver and his Red Bull bosses, with Christian Horner now admitting the 22-year-old can be bought by a rival for an appropriate exit fee.

However, Horner, his fellow Red Bull official Dr Helmut Marko, Toro Rosso's Franz Tost and Renault boss Cyril Abiteboul have all denied that Sainz switching to replace the struggling Jolyon Palmer at Renault will be complete by Hungary.

Now, Sainz is also playing down that scenario.

"I am not thinking about anything except the Hungarian grand prix with Toro Rosso," he said.

As for the Renault switch rumors, Sainz continued: "Yes, many people are asking me to comment on these rumors.

"For me, it's just speculation, and I do not comment on that."

He denied that the recent controversy in Austria, where his Red Bull chiefs scolded him for comments in the media, had damaged the relationship irreparably.

"After Austria we all made clear that what was said was misunderstood," said Sainz.

"At Silverstone I was playing tennis with Christian Horner, and Helmut was the umpire. We had a great time and everything between us is all in order now.

"I am a Red Bull driver, taking part in the youth program of the company and I am sure that I will stay at Toro Rosso next year, trying to deal with the problems starting with the Hungarian grand prix," he added.

Renault driver Jolyon Palmer labelled his formation lap exit of his home event as "pretty gutting", feeling that points were on the cards.

Palmer was set to line up from 11th place for the British Grand Prix but he encountered problems on the formation lap, later attributed to a loss of hydraulic pressure.

He pulled off the circuit along the Hangar Straight, with his stricken R.S.17 necessitating an additional formation lap, while marshals recovered the car.

"Going out at the start of the race is really frustrating," said Palmer.

"We had a hydraulic leak, which is pretty gutting as I think we were in a good position.

"[Starting] 11th, with new tires, in a car that was working really well with lots of different options on strategy: all was looking good to get some points.

"I have had so much support all weekend that it would have been sweet to get them.

"All the same we can see that the car has taken a step forward, but we just need to look at reliability now."

"We have to say sorry to Jo as he finally had the starting position he needed and we all wanted him to get those first points," he commented.

"He almost certainly would have made it if we hadn't had the problem."

Nico Hulkenberg labelled sixth for Renault at the British Grand Prix as a "big success" as he equaled the manufacturer's best result since its return to Formula 1 as a full works team.

Hulkenberg started from fifth position, initially losing out to fast-starting Force India rival Esteban Ocon, before recapturing the position with an assertive move into Stowe.

Hulkenberg was overhauled by Valtteri Bottas, and then came under pressure from the recovering Daniel Ricciardo, the Renault driver's plight exacerbated by a leak around the exhaust.

"We are very happy with the race result; P6 is a big success for the team," said Hulkenberg.

"We were able to get a good lap in qualifying and then to carry it through to the race. We had a strong race pace, and were able to keep ahead of both Force Indias, which is really positive.

"We lost some power at the end, especially down the straights, which made it easier for Daniel to pass me, but then we gained back a position from Seb when he had his problem.

"Overall this is a very positive result. The new upgrades worked really well, we were able to push the car and I'm really pleased for the team."

Hulkenberg moved into 10th place in the Drivers' Championship as a result, while Renault crept closer to Haas in the Constructors' battle.

Fernando Alonso says his retirement from the British Grand Prix was "less painful" than usual, given that he was not fighting for a points-paying position.

Alonso made early progress from the back of the grid to run as high as 13th, though was unable to break into the top 10, before being forced into retirement.

Honda reported a drop in fuel pressure and then a loss of power on Alonso's car, shortly after the halfway mark, with further details under investigation.

"Unfortunately we had another issue today, with the fuel pump, I think, which hopefully didn't make any damage to engine and we can keep using it," said Alonso.

"It was a difficult weekend with the penalties and starting last.

"We were following a group of cars, [but] we were not in the points, so let's say the DNF today was a little less painful, because we were not able to take points."

Stoffel Vandoorne made the finish in the other MCL32, but again narrowly missed out on points in 11th, a few seconds down on Felipe Massa's Williams and the Force Indias.

"It's a shame not to score points today, because our pace was pretty strong, considering the circuit," said Vandoorne, who made Q3 and qualified ninth fastest.

"But there are plenty of positives to take from the weekend.

"I think the qualifying session was good, and also in the race, to finish so close to both Force Indias and a Williams shows encouraging progress."