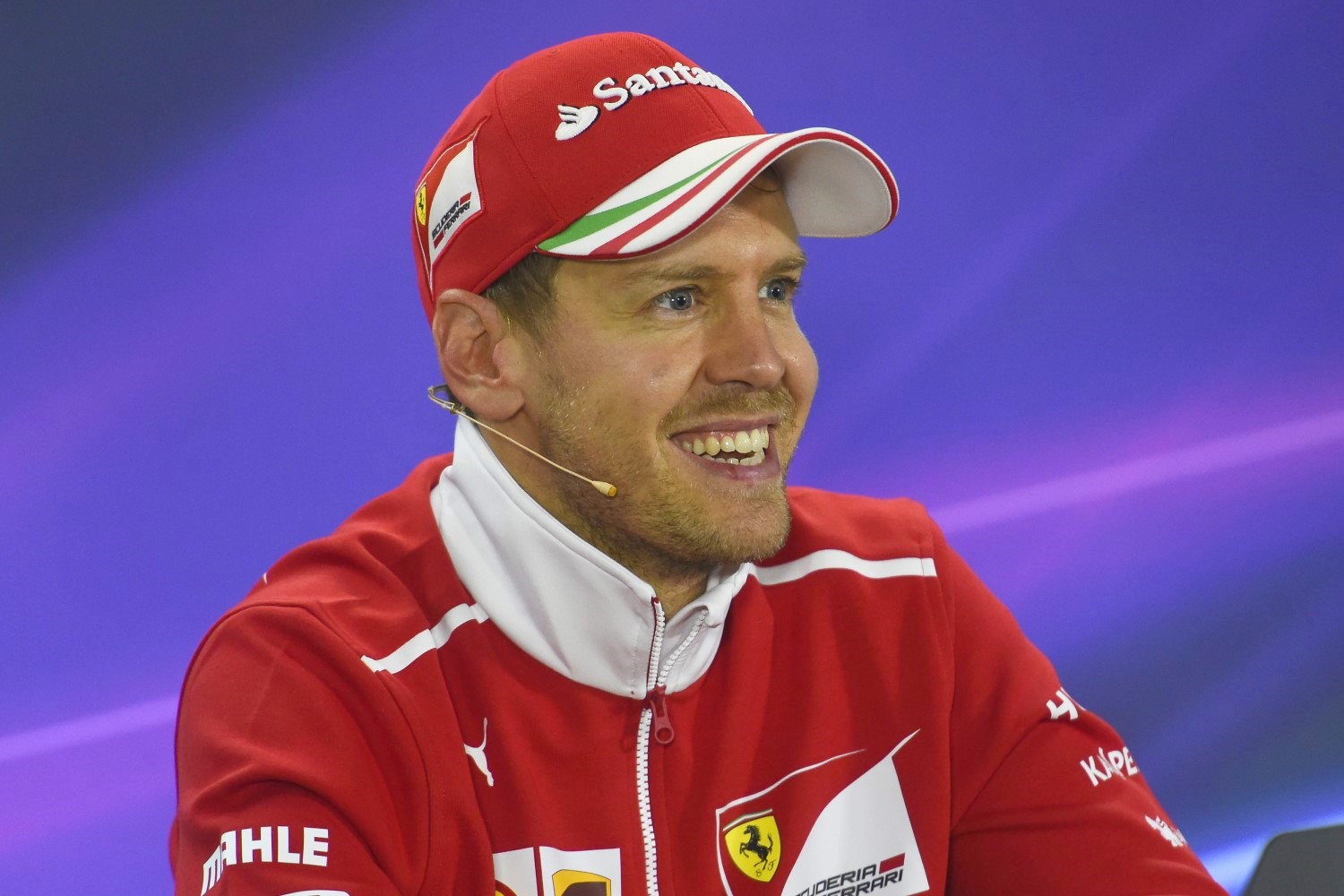 'Sorry' Vettel escapes major FIA penalty
(GMM) Sebastian Vettel has issued an apology after avoiding a major additional penalty as a result of intentionally driving into Lewis Hamilton in Baku.

On his 30th birthday, the Ferrari driver on Monday attended F1 governing body the FIA's investigation into his behavior that some thought might cost him a race ban.

In Baku, Vettel had refused to even acknowledge the collision took place let alone accept the blame, but the FIA said that on Monday the German "admitted full responsibility".

He will not be penalized beyond helping educate Formula 2, F3 and F4 drivers, while Vettel has been banned from taking part in the FIA's "road safety activities" in 2017.

"Sportsmen must be cognizant of the impact their behavior can have on those who look up to them," said FIA president Jean Todt, who otherwise declared the matter "closed".

Later, Vettel made his apology public with an official statement.

"With hindsight, I don't believe he (Hamilton) had any bad intentions. In the heat of the action I then overreacted," said the 30-year-old as he apologized to his championship rival, the FIA and fans.

"I realize that I was not setting a good example. I love this sport and I am determined to represent it in a way that can be an example for future generations," Vettel added.

(GMM) Weight has emerged as a major factor as F1 prepares to change its engine formula beyond 2020.

The next key meeting of the engine working group will take place on Tuesday, following reports the likely unit for the future will be a 1.6 liter V6 with two turbos and a single KERS.

It is believed all the engine manufacturers already involved in F1, and potentially some others interested in joining beyond 2020, want the next units to be 1000hp, louder, simpler and cheaper.

"We are open to technology," Abiteboul continued, "but it should not exclude anyone from winning.

"That is neither good for the best manufacturer or the worst. The engine should make a difference, but we need an engine that is relevant to the series and also good for the sport.

"We need electrification, but we also need a better balance between engine weight and power," the Frenchman said.

Indeed, while it is believed the simplification of the 'hybrid' elements of the current power units will make the next engines lighter, that is also why the switch to all-wheel drive has been ruled out.

Abiteboul agrees: "Four wheel drive is not a good idea because it means more weight.

"The problem with electrification is that it is heavy, and that reduces efficiency. We must find a middle road. Hybrid yes, but not too much," he added.

Ocon moving on after Perez run-ins

(GMM) Esteban Ocon has vowed to move on amid a controversial period in his relationship with Force India teammate Sergio Perez.

In Canada, Perez turned down a 'team order' to let his French teammate past, and then in Baku the pair argued after an on-track clash.

The pair were summoned to Silverstone afterwards for talks, but 20-year-old Ocon said the matter is now closed even though Perez was highly critical of the rookie.

"I don't want to comment on his words except to say it's always bad when contact is made between teammates," Ocon told Franceinfo radio.

"But I say it's necessary to focus on the future rather than the past. We have discussed everything so it will not happen again," he added.

However, Ocon clearly disagreed with Perez after Baku, posting on social media a video of the incident.

"I only did that because what was on TV was only the view from Sergio," he explained. "I just wanted everyone to see what had happened.

"I have talked with Sergio about it and the incident is now over. We are professionals, not amateurs who have a fight over it," Ocon said.

Jordan says Wolff will not silence him

(GMM) Eddie Jordan says he will not be silenced, after being slammed by Mercedes team boss Toto Wolff.

In Baku, Wolff lashed out at the former F1 team owner turned television pundit for continually claiming Mercedes will quit the sport after 2018.

"I told him that this is very serious for me," Wolff said. "He should stop reporting these rumors — this fake news."

But Irishman Jordan has hit back, denying that he actually said Mercedes would quit on a specific date.

"I just said they are in F1 for marketing and technical reasons, not for charity, and they will go when it suits them," he is quoted by Speed Week.

"I just said the contracts with Petronas and UBS end in 2018.

"I can understand that Toto is angry about it, but that's not my problem, that's life," Jordan insisted. "If I say such a thing, I say it with conviction.

"He talked about the 1500 employees, but I'm talking about thousands of shareholders, and a decision that the executive board will make. If they find that the investments are no longer justified, they will be gone."

And so Jordan insists that, despite Wolff's anger, he will not be silenced.

"My job is to tell people what I know," he said. "And that is exactly what I will continue to do.

"I have no problem with anyone," Jordan added. "I can go to any motor home, and if someone thinks I should not, they should tell me directly."

A Mercedes spokesman said Jordan is wrong that the UBS and Petronas contracts expire after 2018.

No Renault wins until 2019 – Abiteboul

(GMM) Cyril Abiteboul has admitted that Renault might not be winning races by next year.

After buying the failing Lotus team, the French marque struggled in 2016 but has restored credibility this year.

"We wanted to establish ourselves in the midfield this year," team boss Abiteboul told Auto Motor und Sport. "We succeeded in that, even if we would like to climb a bit higher in the ranking."

But the Frenchman said it might take much longer before actual race wins start to come.

"Victories must be possible in 2019," said Abiteboul. "It sounds like a long time, but it is not. We know where the top teams are.

"Formula one is about people," he explained. "If I sign someone today, I have to wait one to two years before I can use that talent, so it only has an impact on the 2020 car."

The FIA communicated to Pirelli each team’s tire choices for the forthcoming British Grand Prix (Silverstone, 14-16 July). F1 championship rivals Mercedes and Ferrari have taken different approaches with tire selections for the British Grand Prix, where the Super Soft, Soft and Medium rubber will be used.

Amid complaints over the Hard tire, Pirelli went a step softer for Silverstone, matching the selection it made for China, Bahrain and Azerbaijan, and later events in Hungary, Italy, Malaysia and Japan.

Out of the top three teams, Ferrari has taken the most aggressive approach, with both of its drivers choosing nine sets of Super Softs, followed by Red Bull (eight) and Mercedes (just six).

McLaren-Honda's drivers and Toro Rosso's Daniil Kvyat have gone even further, with 10 sets of Super Softs, leaving them with just two sets of Soft tires and one set of Medium tires.

Only four drivers have selected more than one set of the Medium compound.

One set of Super Soft tires must be set aside for use in Q3, the final qualifying phase, while either one set of Soft or Medium compounds must be used in the race, if there is no rainfall. Fernando Alonso expects McLaren's Honda-powered MCL32 to be "better suited" to the Red Bull Ring (Spielberg), the venue for the Austrian Grand Prix.

McLaren has endured another tough start in 2017, amid Honda's issues, but Alonso got a points finish on the board in a dramatic race in Azerbaijan last time out.

Moving on to Austria, Alonso reckons McLaren can be "more optimistic" about its potential in normal conditions, given the circuit layout, and planned updates.

"I really enjoyed my race in Baku," said Alonso.

"Our performance in the race not only showed that the foundations of our car package are strong, but also that our operational team – our mechanics, engineers and strategists – are all racers, poised and waiting to take advantage of any situation.

"Two points may have been a small consolation after an extremely tough weekend, but, as I said at the time, we'll take it and use it to drive us forwards.

"And there are reasons to feel more optimistic about our weekend in Austria.

"It's a circuit that's not as dependent on power as some of the recent races, and I think our car will be better suited to the twists and turns of the Spielberg circuit.

"We've also got a couple of useful steps coming on the car, including – hopefully – Honda's revised Spec 3 power unit, which I tried during Friday practice in Azerbaijan.

"Every step is important, so I'm looking forward to a positive weekend where we can once again get everything out of the car."

Honda F1 chief Yusuke Hasegawa is cautiously optimistic over the gains the manufacturer has made with its latest power unit, following Alonso's test run.

"We were able to confirm some progress in terms of the power output," he said of the Baku trial.

"We have proceeded with the mapping back at the factory utilizing the data we collected, and we are going to bring the Spec 3 for both drivers this weekend.

"I think we have some improvements in our competitiveness and I am looking forward to seeing our performance in Austria.

"We will not stop our preparation until the last minutes, and I hope we have a good race to reflect our progress."