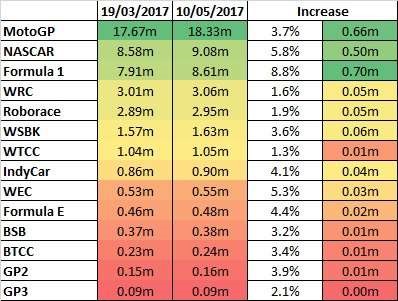 UPDATE The TV ratings numbers generate revenue for IndyCar and it's teams via sponsorship deals. The online numbers generate zilch. Why should a fan bother to watch the race on TV when they can keep up with what is going on via their twitter feed on their smartphone. The subsequent drop in TV viewership equates to an equivalent drop in sponsor value. Twitter is perhaps the biggest theft of the century to sports TV ratings. And you wonder why they're dropping?

05/31/17 The chart below shows the cumulative social media followers each race series had between March 19th and May 10, 2017. MotoGP dwarfs everyone.

Was there an "Alonso Effect" for IndyCar? The Drive's Gabriel Lowenberg breaks it down.

The approximate total number of followers for IndyCar on these three platforms on May 10, 2017 was 900,000.

The approximate total number today is 1,002,100 followers across the three platforms (still 8th position behind even WTCC – World Touring Car).

That is a net increase of 102,100 followers. That translates to 11.3%. The previous 4.1% increase was over about a six week period. In the last 19 days, IndyCar increased their social media foot print by 11.3%. If you go back further, and use the March 19th numbers as a starting point, IndyCar has seen a jump of 16.5%.

That is a massive increase in people paying attention to IndyCar. Obliviously, there are more people who watch IndyCar than follow it online. This year's Indy 500 had at least 300.000 in attendance, maybe closer to 350,000, which is about half the number of their Facebook followers. The television numbers show 5.2 million viewers this year, maybe even a bit higher.

Online followers are only one metric to gauge a fanbase by, unless you are MotoGP, where seemingly every fan in the world follows them online. A 16.5% increase in over a little more than two months is a very good sign for IndyCar, so long as they keep those new fans around.

IndyCar does a fantastic job with their social media accounts. If something happens on track, they have a reply up usually within minutes, and they keep their online fans engaged. So long as they keep having good races on track, keeping these new followers shouldn't be a problem.

Fernando Alonso did have a huge effect on IndyCar's numbers. IndyCar got a big boost of international attention that hopefully they will carry forward. The best part of all this added attention for IndyCar is that the series itself probably spent next to nothing for all the extra press, buzz, and hype. Gabriel Lowenberg/The Drive