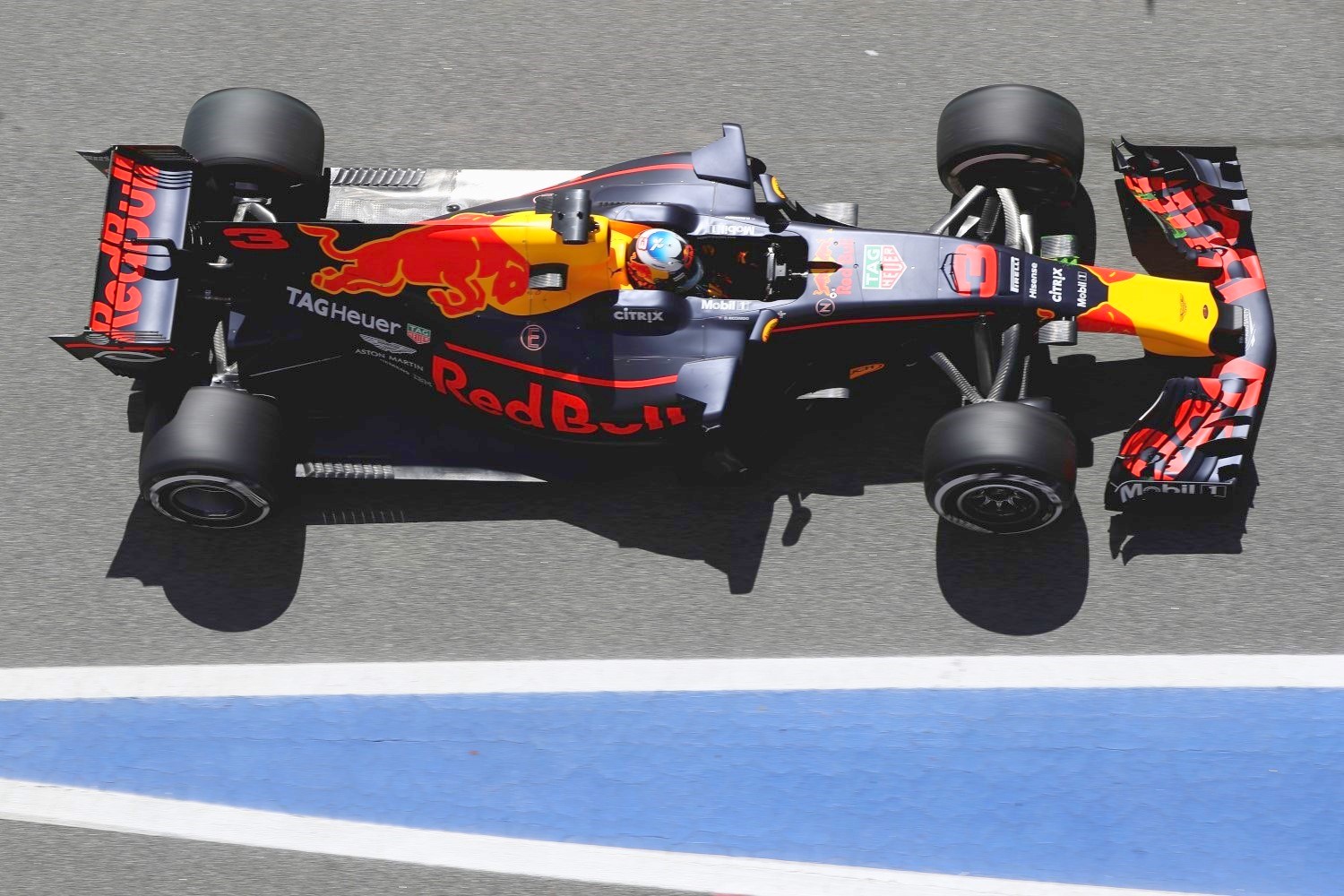 Red Bull plans next upgrade for Austria
(GMM) Red Bull is planning to make the next big step with its chassis at its own Austrian grand prix in July.

The former champions closed the gap to Mercedes and Ferrari with a significant upgrade in Barcelona.

Boss Christian Horner said Red Bull will now assess the next move, after earlier problems arose with correlation between CFD, the wind tunnel and the track.

"We are looking at which of our tools we can rely on and which we cannot," he told Auto Motor und Sport. "The wider tires have a greater impact on aero than we thought."

Red Bull does now at least have the full attention of Adrian Newey, after the famous F1 designer spent much of his time in the last two years on non-F1 projects.

Indeed, Newey was even in Barcelona.

"Adrian wanted the feedback from the drivers to better understand the car and determine the direction for the future," said Horner.

There will be only minor upgrades for Monaco, while a special low downforce package will debut in Canada.

But a big upgrade is due for Austria, the race promoted and hosted by Red Bull. The team is hoping a better Renault engine is also available by then.

"If we could turn the power up full, we would not be far from Mercedes and Ferrari," an unnamed team member said. "But because of reliability, we can't do it yet."

(GMM) Red Bull could quit formula one if the next set of engine regulations is not significantly better.

That is the warning-shot fired by the energy drink-owned team's top Austrian official Dr Helmut Marko.

Talks have already begun about how to tweak the controversial engine rules for beyond 2020, and Red Bull has some conditions.

Marko told El Confidencial: "The idea is very simple. We want an engine that is 1000hp, with a single standard KERS and battery, and development does not cost more than 15-20 million.

"They should have sound, and allow the driver to make the difference. And independent companies like Ilmor and Cosworth should be able to enter so that we or McLaren can use them if we want," he said.

And if those conditions cannot be met, Marko confirmed that Red Bull might quit F1.

"Yes," he said, "because last year Mercedes would not give us an engine, neither would Ferrari, and Renault was only forced by Ecclestone to give us one.

"We want to have an equal situation where we are not blackmailed by a manufacturer," Marko added.

When Mercedes was on the market to replace Nico Rosberg, rumors emerged that Wolff looked into Toro Rosso driver Sainz's contract situation.

Wolff told El Mundo Deportivo: "Yes, Carlos is ready and I like him and I like the family.

"Carlos is what he has to be: a modern driver, handsome, intelligent, fast," he said.

It is believed Renault also looked into signing the 22-year-old for 2017, but Wolff said: "He is a Red Bull driver and they will always try to keep the good ones in their system or to control their destiny.

"And that's the situation right now," he added.

The Red Bull driver program is headed by Dr Helmut Marko, who told El Confidencial that while Sainz is developing well, he still has room to improve.

"But I think he would develop better if he left the 'Madrid protection zone' of his father. He is still like a young bird in the next.

"He is fast – very fast – but he has to be consistent," Marko added. "He made a stupid mistake in Bahrain, but he's young, he can learn, and he has to be patient," said Marko.

Although Red Bull Racing's drivers Max Verstappen and Daniel Ricciardo are under contract for 2018, there are rumors one of them might depart anyway.

So when asked if Sainz might be released in that event, Marko answered: "Traditionally we talk about drivers after the summer. It's too soon."

As for strictly holding Sainz to his contract, he added: "If it was a much better team than Toro Rosso, we can talk.

"But Ferrari did not ask for Carlos — that was in the dreams of Carlos senior. So far no one has called us.

"He must concentrate on doing the best job possible and he will automatically develop. On the other hand, we need a reserve driver and Carlos is our first option."

(GMM) Kimi Raikkonen has become a father for the second time — and Nico Rosberg appears to be hot on his heels.

Meanwhile, Bild newspaper reports that although the news is not official, retired Rosberg and his wife Vivian are also expecting their second child.

The pair were spotted leaving Monaco's Princess Grace Hospital this week, where their almost 2-year-old daughter Alaia was born.

When contacted by Bild, Rosberg would not confirm the happy news.

Boss defends Force India after number breach
(GMM) Sporting boss Otmar Szafnauer has defended Force India, after the team was pulled up for not complying with new rules in Barcelona.

To help the fans in the grandstands and the TV audience, F1 told teams they must fit bigger numbers and the drivers' abbreviated names on their cars from Spain.

But Force India argued that because of their sponsor deals with BWT and NEC, adding 'OCO' and 'PER' to their cars would be confusing.

However, it was the location of the bigger race numbers on the pink cars that actually broke the rules last weekend.

Team manager Andy Stevenson told Auto Motor und Sport: "When I stand in front of the car, I can read the number perfectly. From the grandstand too.

"From lower down it is not visible but there is nothing in the rules about that. There are perspectives with every car on which the number is not visible," he said.

Sporting boss Szafnauer said the entire issue is triggered by commercial considerations for the small, overachieving Silverstone based team.

"As you know, Force India does well on the track but is not as strong in the commercial area, which is related to the way revenues are distributed in formula one," he said.

"But the approach of the commercial rights holders is what it is, so we have to maximize the way we work with sponsors. To do this, we need to make optimal use of the space on the car.

"Personally, I think we could come up with a better way to distinguish the cars on the track," Szafnauer added.

(GMM) Ross Brawn thinks there is space on the F1 calendar for "one or two more" races.

There has been speculation the sport's new owner Liberty Media intends to expand the current 20-race schedule, adding races in 'destination cities' like New York.

But Brawn, the new F1 sporting boss, said: "More important than the number is the quality of the races. There's no point having many races that are boring.

"Our priority is to improve the quality of the existing races and to add only more quality races to the calendar.

"The teams already have a challenge with the current 20 races, but I think we have the capacity for one or two more if the quality is high," Brawn told the Austrian broadcaster ORF.

Explaining the new F1 numbers
Starting with the Spanish Grand Prix, the driver’s name now appears on the side of the F1 car and the number on the front has to be of a minimum size. The purpose behind this new regulation is to ensure that the fans can identify each car – and even more importantly each driver. In our video, we show how the design team at the Silver Arrows factory created the new look for the W08.