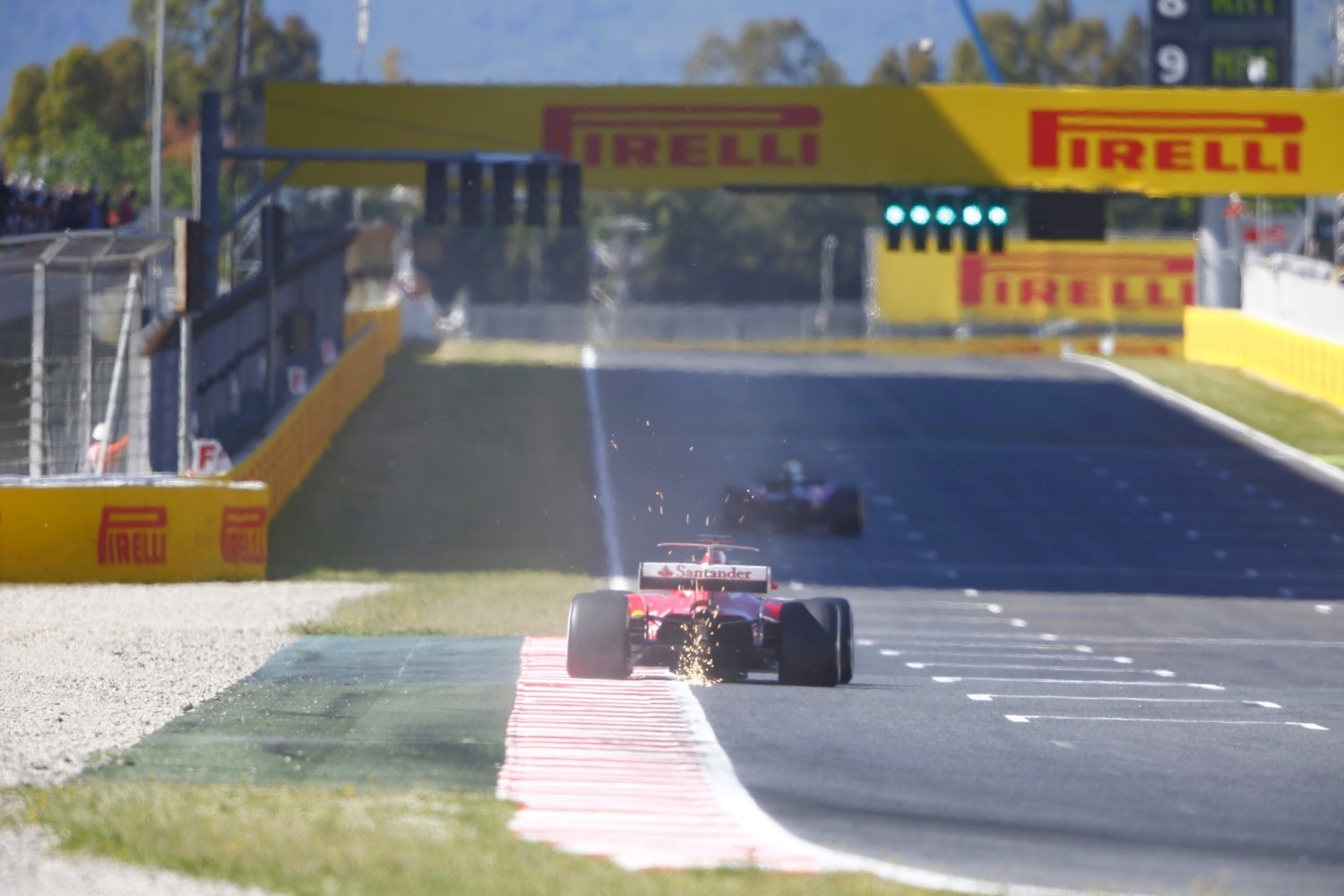 In Russia recently, there was just a single passing move all race, prompting some drivers to raise the issue in their FIA briefing ahead of the Spanish grand prix.

So the Barcelona DRS zone has been extended by 100 meters.

"We discussed it in the briefing," revealed Daniel Ricciardo. "Hopefully it improves it."

Williams' Felipe Massa added: "It will still be difficult."

Ferrari driver Kimi Raikkonen said: "It has never been easy to overtake here, so let's see if this will help."

(GMM) Stoffel Vandoorne is working on tweaking his driving style to better adapt to formula one.

That is the claim of McLaren boss Eric Boullier, when asked by the Belgian newspaper La Derniere Heure why rookie Vandoorne is usually outpaced by teammate Fernando Alonso in 2017.

"The reason is simple and Stoffel knows it very well," the Frenchman said.

"The problem for rookies from the junior categories is the braking. He is used to braking very late and entering the corners on the brakes, but F1 is different.

"He has to change his driving style, but I am sure it will come," Boullier added.

The Italian marque's hard compound selection for Barcelona has been controversial this weekend.

"Pirelli has been perhaps a little too conservative," said Ferrari's Sebastian Vettel. "The tires here are too hard."

Earlier, Pirelli explained that it elected to take harder tires to the Spanish grand prix after seeing the downforce data about the teams' car upgrades.

Daniel Ricciardo said: "In the drivers' briefing we brought up the tires because we would prefer not to have these hard tires anymore — at any track.

"We're supposed to use them in Silverstone but we're going to try to stop that," he is quoted by Speed Week.

(GMM) Max Verstappen says he is happy at Red Bull.

Former F1 driver and now veteran commentator Martin Brundle said last week that he can sense the Dutchman's "frustration" amid the team's performance struggle early in 2017.

It comes amid rumors of a potential switch to Ferrari, but Red Bull's Dr Helmut Marko said the 19-year-old is clearly under contract with no exit clause.

So when asked how long he can wait for his first title, Verstappen told Bild am Sonntag newspaper: "You must be able to wait.

"I'm still very young and I do not have the goal of becoming the youngest world champion. Sure it would be a nice bonus, but for me it is more important to get the most out of my career.

"If I give my best and I've had a good career but in the end it's not enough for the title, that's ok," he added.

So when asked specifically if 'impatience' might mean he leaves Red Bull one day, Verstappen answered: "It's still a bit early for that.

"I will do my best and when the contract expires, we will see what happens next. You can say a lot when you have signed a contract but you can't do much. It's not my focus at the moment."

No longer involved in any capacity with the Swiss team that still bears his name, the 73-year-old told Sonntagsblick newspaper he was invited to Spain by new Sauber owner Pascal Picci.

"When I got out of the car I saw Felipe Massa and he came over to hug me immediately," Sauber said.

"For these reasons, I accepted Picci's friendly invitation. People are happy when they see me. Formula one was my life for 25 years and you can't just forget it."

For a man once synonymous with the team pitwall, Sauber has been completely absent now for some time.

"In nine months, I have managed to get a distance," he said, "which is why I was happy that Picci asked me.

"What I miss is the people, not the races. I watch it regularly on the TV but it doesn't always have to be live."

Sauber said he would prefer not to comment on his former team's current performance, but he did mention the action closer to the front.

"Ferrari has done well but I'm still skeptical," he said. "I was really happy about Bottas' first win as it's great that such stories are still possible.

"But it would certainly be better if the six fastest cars were not so far away from the rest."

(GMM) Cyril Abiteboul has hinted it is not Renault's priority to push to sign Fernando Alonso for 2018.

Amid the McLaren-Honda crisis, Spaniard Alonso is clearly on the market and rumors have linked him with a return to Renault, where he won his two titles over a decade ago.

"I know you want to know something about Alonso and Renault," Abiteboul told the Spanish sports newspaper Marca.

"I can only say that firstly Fernando is a world champion, we understand that he knows his time is running out, but we have to see what he wants to do with his life.

"So first he has to know what he wants himself. Does he still want to continue in formula one? Is he still passionate about the sport?

"Communication has never been cut, there has always been a kind of loyalty, but there is no need for him to wait for our team — he knows where we are," Abiteboul added.

"Right now we are in full development and we want to focus on carrying out this work with the drivers we have, Jolyon and Nico," he said.

After Barcelona, Alonso will skip Monaco to do the Indy 500.

Abiteboul said: "Being at Indy instead of Monaco proves that he wants to see what's outside of F1 and find the answer if he still loves F1. It is the first question to be answered.

"There will be time to talk but I don't want to feed rumors," he insisted. "Alonso is always a member of our family, but everyone has to make his living as well."

Earlier, it was rumored the radical 2017 regulations had re-fired the famous designer's interest, but then Red Bull began the season clearly behind Ferrari and Mercedes.

"No, my involvement was small," Newey told Brazil's Globo.

"I know people think I designed the car, but it's not true," he said. "I started working on the RB13 after Australia."

Newey does acknowledge that the car's big upgrade package in Spain – a "massive" step according to Max Verstappen – is his handiwork.

"Yes, the new parts were devised following my involvement in the project," he said.

"We still have a lot of work to do, but I think we can make it faster still. How much is unclear."

And Newey said that now he is deeply involved in F1 design again, he is enjoying the very different 2017 rules.

"There's a lot to be understood and better explored, and it's an interesting challenge," he said in Barcelona.

(GMM) Zak Brown has admitting time is running out to convince Fernando Alonso to stick with McLaren beyond 2017.

With his three-year McLaren-Honda contract expiring, Spaniard Alonso has revealed that he is on the market for 2018 unless the struggling Anglo-Japanese collaboration can promise him a winning car.

"What we've agreed is that we will talk about this in the summer," new McLaren executive Brown told the Spanish daily Marca.

"Luckily summer does not start tomorrow, because I think I know what his decision would be today," he admitted in Barcelona.

"I think we're his favorite choice, provided we can give him a competitive car.

"It's clear that in 2017 he's not going to win any championships here, so he's thinking about where he can win races in 2018. And he hopes it will be at McLaren-Honda," Brown added.

"We have another nine or ten races to show him that we will be in a position to give him a winning car in 2018."

One rumor is that Alonso has actually set a June deadline, with a new specification of Honda engine potentially set to debut in Canada.

But Brown said: "I don't think it will be a particular race. He will look at how we are progressing generally rather than assessing a specific update.

"I think he will sit down some time in the summer and think 'Do they really have a path to give me a winning car in 2018?'"

(GMM) Fernando Alonso says he has no regrets about sitting out the forthcoming Monaco grand prix.

Amid the McLaren-Honda crisis, the Spaniard is sitting out F1's most prestigious race in a fortnight to instead vie for victory at the Indy 500.

But Alonso qualified a shock seventh in Barcelona, and Monaco could be an even better circuit for the team.

So when asked if he has any regrets about sitting out Monaco, Alonso insisted: "Zero.

"On the same day as Monaco I am driving one of the biggest races in the world. What could I have done in Monaco?" he is quoted by Auto Motor und Sport.

"Mercedes, Ferrari and Red Bull will be in front of us so it would only be for seventh place again. No thanks," the 35-year-old said.

Honda has made an obvious step forward in Barcelona, and it is believed the struggling Japanese supplier is planning a bigger upgrade for Canada in June.

"That is the plan, but I cannot promise it yet," said Honda's Yusuke Hasegawa.

Mercedes boss Toto Wolff says the outfit must "stay alert" if it is to convert pole position into victory at the Spanish Grand Prix, amid a continuing threat from Ferrari.

Mercedes and Ferrari have taken two wins apiece at the first four Grands Prix, Sebastian Vettel winning in Australia and Bahrain, Lewis Hamilton in China and Valtteri Bottas in Russia.

In Barcelona, Mercedes will start from pole position for the fourth time this season, courtesy of Hamilton, though Vettel pipped Bottas, and Wolff is wary of the Scuderia's threat.

"Nobody had it easy out there and it was nice to see such a close fight for pole in the final laps," said Wolff, referring to the 0.051s gap between Hamilton and Vettel in Q3.

"Lewis did a great job: it was tricky to put the sectors together, and I'm not sure any driver had a perfect lap, but he did two times good enough for pole position in Q3 and really deserved it.

"As for Valtteri, I think he was probably lacking some miles after the engine change; he had the pace but small mistakes on each lap meant he couldn't get on the front row.

"Even so, first and third are good starting positions, from the clean side of the grid.

"The race will be long and tough with the tires; there will be lots of opportunities to take, so we need to stay alert and make the right decisions all the way though."