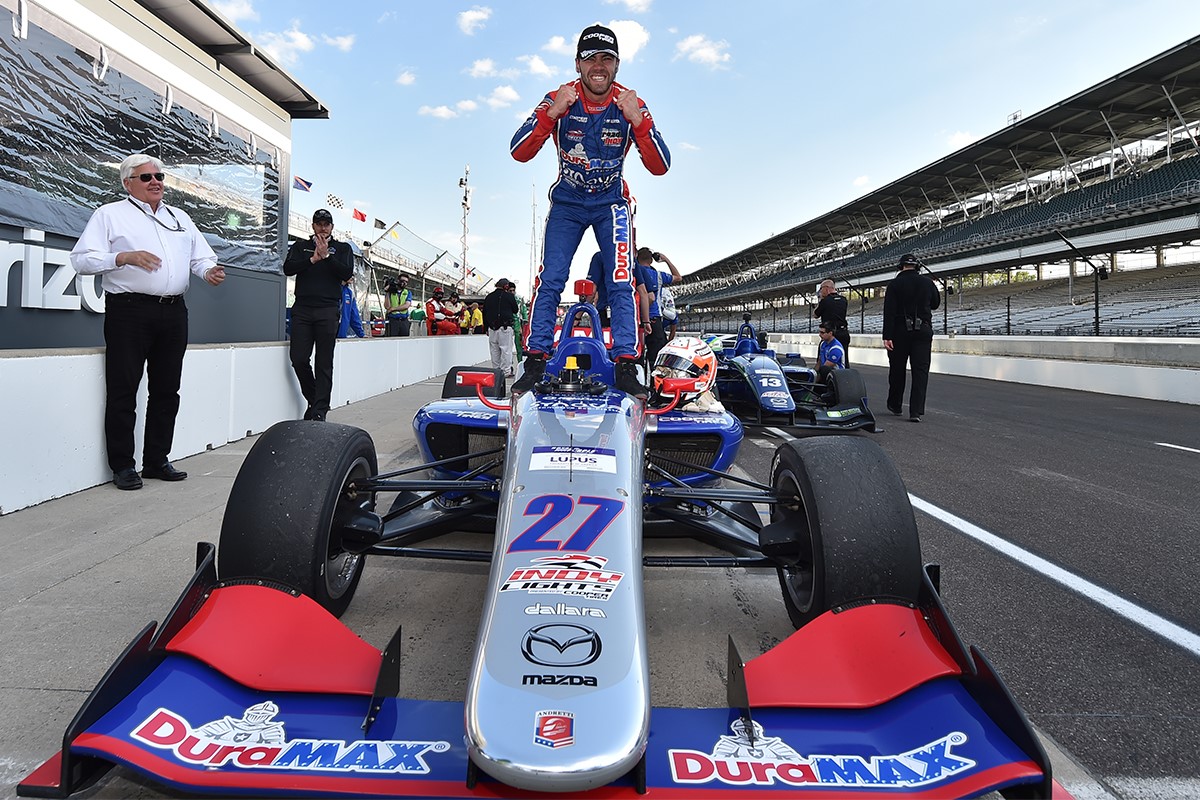 An enthralling 30-lap Mazda Road to Indy Grand Prix Presented by Royal Purple Supporting Lupus Foundation of America this evening on the Indianapolis Motor Speedway Grand Prix road course saw Nico Jamin claim an impressive win for Andretti Autosport. The 21-year-old Frenchman’s second victory of the season enabled him to close to within three points of series leader Colton Herta (Andretti-Steinbrenner Racing), who could manage only a distant 12th-place finish after an unscheduled pit stop.

Fellow Californian Kyle Kaiser (Juncos Racing) also is now tied on points with Jamin following his third consecutive podium finish, although on this day he had to give best to Carlin’s Zachary Claman De Melo, who overcame a poor start to earn a career-best second-place result.

After securing the pole position in qualifying this morning, Jamin capitalized by holding the lead into Turn One. In his wake, a bold maneuver around the outside at Turn One from Herta, who had qualified a disappointing sixth, saw the 17-year-old from Valencia, Calif., vault all the way up into second place ahead of Kaiser, an equally fast-starting Aaron Telitz, who had started eighth for Belardi Auto Racing, Neil Alberico (Carlin) and surprise front row qualifier Claman De Melo.

Herta placed teammate Jamin under intense pressure for the opening couple of laps before settling into second place. A remarkably consistent series of fast laps enabled Jamin to stretch his lead to almost two seconds by Lap 11, whereupon Herta suddenly began to come under attack from a train of cars comprising Kaiser, Claman De Melo and Alberico, who lost a position to his teammate on that same lap but remained firmly in contention.

On Lap 14, Herta lost a couple of positions before realizing that his car had lost its balance. A slow puncture was quickly diagnosed, forcing Herta to head for the pits for a replacement left-rear tire.

By this time Jamin held a comfortable lead of 3.7 seconds over a battling Kaiser and Claman De Melo, but that margin was gradually whittled down until, on Lap 22, the two leaders were separated by less than two seconds. Next time around, Staubli Award winner Claman De Melo squeezed past Kaiser on the run toward Turn One. Even though the pass cost him a little bit of ground to the ultra-consistent race leader, the young Canadian kept on turning fast laps to take the checkered flag just 0.8405 seconds adrift of Jamin.

Alberico claimed his fourth top-four finish of the year, while rookie teammate Matheus Leist recorded the fastest lap of the race as he climbed from ninth on the grid to fifth for his best finish of the young season. Leist, from Novo Hamburgo, Brazil, also earned the Tilton Hard Charger Award.

Qualifying for Indy Lights Presented by Cooper Tires Round 6 will take place tomorrow morning at 9:20 a.m. EDT, followed by the race itself at 1:15 p.m., immediately prior to the Verizon IndyCar Series headline event. Live timing and live streaming will be available on indylights.com, as well as on indycar.com, the Road To Indy TV App and RoadToIndy.TV.

Nico Jamin (#27 DuraMAX Powered by RelaDyne Mazda-Andretti Autosport ): “It is amazing emotions – I don’t think it gets any better than winning at the Indianapolis Motor Speedway. I was nervous starting on pole. You’re always happy to get the pole and the check but I saw in USF2000 here two years ago that the guys behind you can really get a good run into Turn One. I knew I had to get a good jump and I did, though I didn’t want to look in my mirror because I knew it would be a mess. I broke really late into Turn One but Colton was close behind me and I had to defend. We made it clean so it was alright in the end. I pushed hard in the beginning to get away from Colton, who was on his push-to-pass, but then Zach was a rocketship at the end and was catching up. The guys were yelling on the radio for me to push harder, but I couldn’t. But I’m very happy to have gotten the pole and the win for the DuraMAX guys, who have joined me this month."

Zachary Claman De Melo (#13 ZCD Montreal/Zoological Wildlife Foundation-Carlin): “I knew I had really good race pace so my plan at the start was just to stay calm and stay on the track. My plan was also to have a good start, but that didn’t go my way so I had to try and pass as many guys as possible. I didn’t think about much, just that each and every guy in front of me was my target. I had some lapped traffic as I got near to Nico otherwise I think I could have challenged him. The car never dropped off. It gives me good confidence going into qualifying and the race tomorrow."