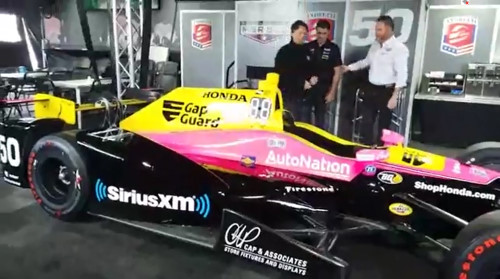 INDIANAPOLIS (May 11, 2017) – It was announced in April that Michael Shank Racing would join forces with Andretti Autosport to field the No. 50 car of rookie driver Jack Harvey for the 101st Running of the Indianapolis 500. The two successful racing teams combine their on-track experience and knowledge to set the stage for Mike Shank’s future ambitions as a full-time owner in the Verizon IndyCar Series.

MICHAEL ANDRETTI, CEO, ANDRETTI AUTOSPORT:
“As everyone has read, the Month of May is going to be big for us. We’re really excited to be partnering with not only McLaren and Honda for Fernando Alonso, but also with Michael Shank Racing in a joint entry on the No. 50 for Jack Harvey. Michael (Shank) and the partnership with his organization was instrumental in allowing us to run six cars in the 101st Indy 500. The six drivers and engineering teams will work closely together as we defend our win from 2016."

MIKE SHANK, PRESIDENT, MICHAEL SHANK RACING:
“The yearning to do the Indianapolis 500 has always been there. To be able to do this after all these years, especially after going up the open wheel route that we were going for 10-12 years and then deviating into sports cars, it is incredible.

“When I drive into the Indianapolis Motor Speedway, through the gates and over to Gasoline Alley – it means a lot to me. And it’s not just me and my family. It’s giving everybody here who’s been working on my team for so long an opportunity to do what I think is the greatest race in the world. We’re going to approach the race just like every other race we’ve done. The Indy 500 is a relatively short race for us to be honest – it’s a four-hour race. We do those almost every time we go on the race track in the sports car world. I’m not worried about that side of it. It’s the intensity and the pace that we have to figure out. These days the Rolex 24 race has turned into 24 one-hour sprints so we’re used to staying hard on it all the time.

“It’s incredible to have the support of Andretti Autosport. The exact set up that Fernando Alonso had on his car at ROP – will go on Jack’s (Harvey) car for his first time out. We have a lot of resources behind us and we can look at the historical races and the different strategies and really utilize everything we have to make this as successful as possible."

AutoNation, CAP & Associates, Gap Guard, Roberts Service Group and SiriusXM Join Michael Shank Racing Partners to be Featured on the No. 50 Piloted by Jack Harvey
INDIANAPOLIS (May 11, 2017 ) – Today the machine Jack Harvey will drive in his debut race was unveiled as Harvey, Mike Shank and Michael Andretti pulled the cover off the vibrant pink and yellow Honda. Partners revealed varied from longtime supporters of Michael Shank Racing to fresh backers of Jack Harvey.

Joining Michael Shank Racing with Andretti Autosport in support of Harvey’s Indy 500 entry will be longtime Andretti partner AutoNation, the largest U.S. automotive retailer. The South Florida based company painted the livery pink in support of their Drive Pink campaign, raising breast cancer awareness. This May, AutoNation will celebrate the sale of its 11th million vehicle; the first and only automotive retailer to achieve this historic milestone.

Having first joined Michael Shank Racing as a partner in 2010, CAP & Associates will reflect their support onto the No. 50 car of Jack Harvey. Established in 1981, CAP & Associates designs and manufactures store fixtures and displays and proudly displays their brand on the wings and bargeboard of the No. 50 machine. CAP& Associates designed much of Michael Shank Racing’s race shop, along with their custom trophy case in the team’s Pataskala, Ohio, headquarters.

With eye-catching yellows, Gap Guard are continuing their Indianapolis 500 tradition, joining the MSR 500 campaign as a major partner. A necessity for all car owners, Gap Guard’s patented, all American ‘Carmuda Triangle’ gap protector fits between the front seats and center console of any car, preventing valuables from falling under and in between the seat.

SiriusXM, a leader in audio entertainment, will adorn the sidepods of Harvey’s Honda. SiriusXM is the Official Satellite Radio Partner of IndyCar, and with approximately 31.6 million subscribers is the world's largest radio company measured by revenue. Fans can listen to the 101st Running of the Indianapolis 500 live on SiriusXM (Sirius 214, XM 209 and on the SiriusXM app) Sunday, May 28, at 11 a.m. ET.

JACK HARVEY, INDY 500 DRIVER, No. 50 MICHAEL SHANK RACING W/ ANDRETTI AUTOSPORT HONDA:
“We’re super excited to unveil the car, it’s something we’ve been working on for a long time and I’m glad we’re finally able to present it with all our sponsors and partners. It’s been a long-time in the making, I think about 18-months for me, but we’re happy to have AutoNation on board who has been supportive of this dream of mine for over a year now, so it’s been a relationship that has been growing and building forward for a while now.

With Gap Guard coming on board and adding some yellow to the car, the team did a great job making pink and yellow flow well through the livery. And, just recently having SiriusXM join us is the icing on the cake. Obviously with Mike (Shank), it’s great to see his partners following him over from Columbus, (Ohio). I’m looking forward to sharing this experience with Mike (Shank), Michael (Andretti), all of our partners and everyone else who has come together to make this opportunity possible."

MARK CANNON, CHIEF MARKING OFFICER, AUTONATION:
“AutoNation is excited to build on our partnership with Andretti Autosport through the sponsorship of Jack Harvey. Jack is a talented driver who will be joining AutoNation in the fight against cancer by supporting our Drive Pink initiative. By racing the No. 50 car, Jack is celebrating the 50 million customers AutoNation has serviced over the last 20 years, who show their encouragement through their Pink Plates to benefit breast cancer research. The entire AutoNation team will be rooting for Jack Harvey and Ryan Hunter-Reay on race day."

CHARLENE PROSNIK, CEO, CAP & ASSOCIATES:
“When we heard that Michael Shank Racing was entering the 101st running of the Indianapolis 500, we wanted to support the team in any way we could. We’ve been a partner of Michael Shank Racing for over seven years and we’ve watched Mike (Shank) make a difference in motorsports. Racing in the Indianapolis 500 is a dream come true for Mike and one that is well-deserved. It's just as exciting for us at CAP & Associates to be a part of this moment and we can’t wait for the Month of May to begin."

JONATHAN KOTYK, GENERAL MANAGER, GAP GUARD:
“We are thrilled to be partnering with the great organizations of Michael Shank Racing and Andretti Autosport and having Jack Harvey at the wheel. To be alongside such esteemed companies as AutoNation and Sirius XM on Jack’s car means a lot to Gap Guard as we enter our largest year of activation ever. We are looking forward to a great month of May with everyone involved.

BETH BUTLER, PRESIDENT/COO, ROBERTS SERVICE GROUP:
“We were so excited that Michael Shank Racing was running in the Indy 500. We wanted to be a part of this amazing opportunity and help Mike (Shank) and the team any way we could. I’ve known Mike (Shank) and his wife Marybeth for over 20 years. The Indy 500 has been a star they have been reaching for and to be able to support their dream is an honor and privilege for us. Since first partnering with Michael Shank Racing in 2013, we have seen how Mike and the team attack every challenge with the same preparation, drive and determination. It’s a thrilling thing to be a part of and we can’t wait for race day!"

JIM MEYER, CHIEF EXECUTIVE OFFICER, SiriusXM:
“Jack Harvey is a talented up-and-coming driver and SiriusXM is proud to support him in his first Indianapolis 500. We’re excited to work with Jack and the outstanding Michael Shank Racing and Andretti Autosport teams to have SiriusXM represented on the No. 50 car for IndyCar’s premier event."