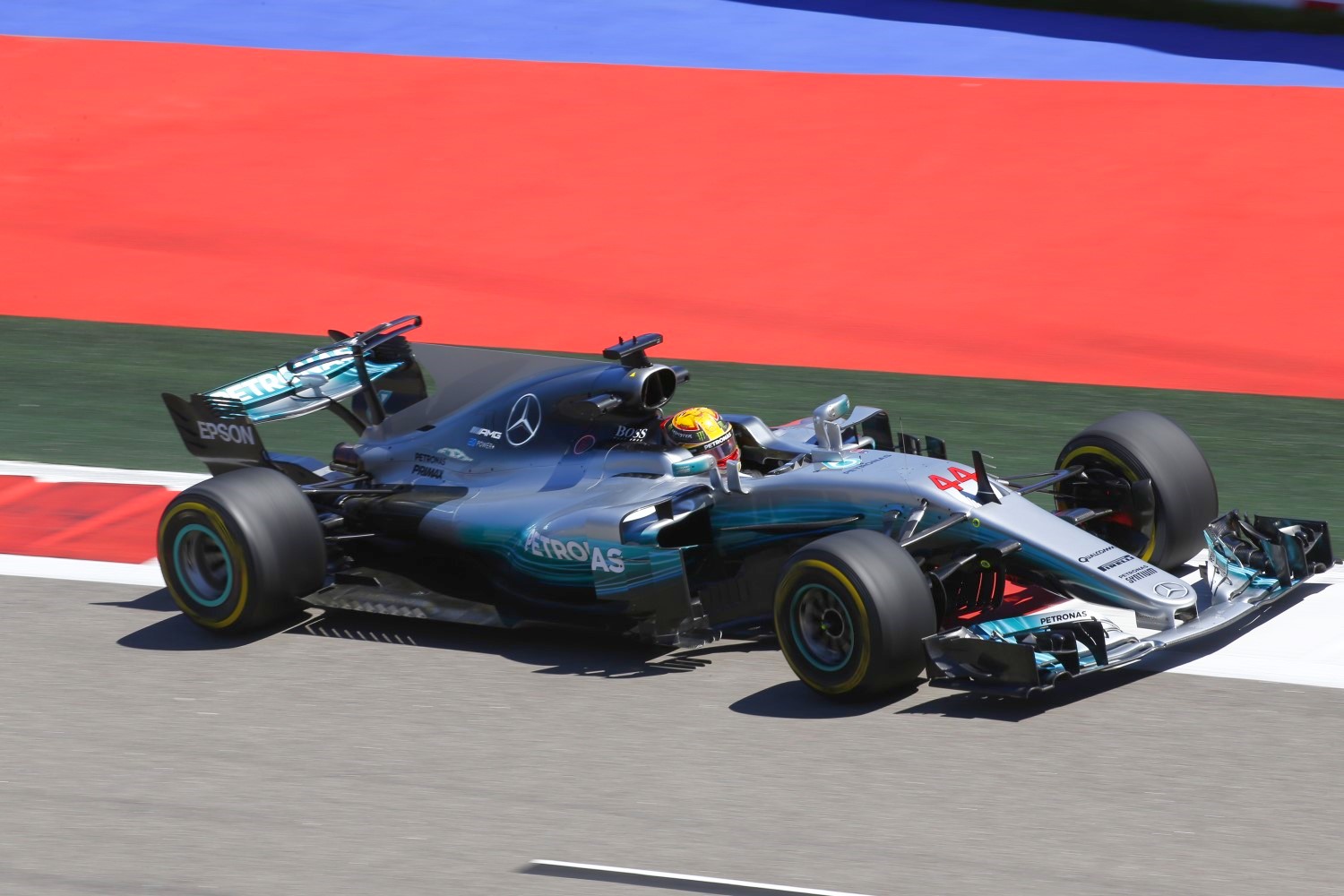 He then accused Mercedes of having "misled" the pecking order.

"We were just trying to find the right balance in the car, but today it was not easy," he added on Friday.

As for why Vettel would accuse him of sandbagging, Hamilton answered: "I don't know. Maybe he's just trying to draw attention to us.

"But the reality is that Ferrari is just very fast."

Ferrari may be fast, but the Italian team has headed into the Sochi weekend under a cloud about the reliability of its turbo unit. Vettel, for instance, is already using the third out of a maximum of four turbos for 2017.

"I don't think it's a great concern for us," the German insisted.

"Of course we didn't plan it, but I think the other two that we have can still be used. Surely we have our reasons, but as I understand it is not a big problem."

(GMM) Niki Lauda has denied Mercedes is tossing up between a future in F1 or the all-electric open wheeler series Formula E.

As F1 starts the process of planning for the new engine rules beyond 2020, it is notable that Mercedes has reserved a place for the future in the ever more popular and relevant electric series.

But Mercedes team chairman Lauda told Speed Week: "We did it (reserved the place) for strategic reasons.

"But we will continue to be in formula one. It (Formula E) is not under discussion for us as an alternative to formula one," he added.

(GMM) Red Bull has questioned the FIA's conclusion that engine performance has now been basically achieved in formula one.

Germany's Auto Motor und Sport reports that, after the opening three races of 2017, the governing body analyzed data that shows the gap between Mercedes, Ferrari and Renault is within an acceptable three-tenths per lap.

The report ties in with speculation straggling Honda may be given some help to catch up.

"Ferrari has caught up and Renault is not far away," said the Mexican.

But Renault-powered Dr Helmut Marko has questioned the FIA's methodology of having analyzed the performance of the three engine makes over a series of laps.

"Probably the in and out laps," he said sarcastically.

As for Perez's claim that Renault has basically caught up to Mercedes, Marko told Auto Bild: "That's what he said probably because (Renault's) Nico Hulkenberg was faster in Bahrain than he was."

Indeed, Marko may be referring to speculation that Hulkenberg – as the works Renault team's top driver – is getting the pick of the French-made engines.

"These speculations cannot be dismissed," said the Austrian.

(GMM) Daniil Kvyat stands a chance of keeping his Toro Rosso seat beyond 2017.

That is the claim of Red Bull officials Dr Helmut Marko and Christian Horner, as the young Russian recovers from his tumultuous career dip of last year.

Mid last season, Kvyat was dropped from the senior team to make room for Max Verstappen, and the 23-year-old subsequently struggled to get back up to speed at Toro Rosso.

But Marko now says: "I don't see any reason why he would leave the team. He has his confidence back.

"In the near future Kvyat does not have a chance to return to Red Bull because we have two drivers whose contracts expire after 2018," he added.

"But the decision on whether he will remain at Toro Rosso will be taken at the beginning of the summer."

Horner, the Red Bull team boss, agreed: "Daniil is doing a good job now and his confidence is growing.

"The only reason that we kept him in the program is because we believe in his ability. Red Bull has its two drivers for this and next season, but after that everything is possible," Horner added.

Actually, McLaren headed into Sochi with confidence, after an update appeared to have transformed the reliability of Honda's struggling power unit at the post-Bahrain GP test.

But Stoffel Vandoorne then struck more trouble in practice for the Russian grand prix.

"He has had engine problems and I think has to be penalized," Alonso is quoted by Spanish media in Sochi.

"It is incredible that it happens in the fourth race. We've had a lot of failures and having them in practice does not give you great confidence," he added.

"The car is as it was in Bahrain, so if we had problems in the first three races, we will have them here, in Barcelona, in Monaco," Alonso said.

"I don't think we have anything (new) until Canada. For McLaren, we are going to bring aerodynamic improvements in every race, and in Canada we hope that something comes from Honda that gets us at least in the fight."

As for the fact that having already run through his allocation of four engines for the year means he goes to the back of the Sochi grid, Vandoorne said: "I knew it would happen eventually.

"So given the position we are in, I don't think it changes much."

(GMM) The big story about McLaren tackling the fabled Indy 500 next month is all about Fernando Alonso's "ego".

That is the view of Toto Wolff, boss of the Mercedes team.

"But from the team point of view, I cannot understand that McLaren does not use him in Monaco. He could definitely have scored points, although of course it's not a trophy at Indianapolis.

"I think it's about Alonso's ego," the Austrian said.

(GMM) Sebastian Vettel has jumped to the defense of his teammate and friend Kimi Raikkonen.

Recently, amid speculation the Italian team might replace the Finn for 2018, Ferrari president Sergio Marchionne made disparaging comments about Raikkonen's performance.

"You can find so many nonsense stories in newspapers and on the web," Raikkonen said in Russia. "I trust much more how my personal relationship is with the team or with him, and for me it's all fine."

"In contrast to the outside, I see exactly what is happening and that things have just not gone his way so far," the German is quoted by the Finnish broadcaster MTV.

"I don't think anyone in the paddock doubts that he is one of the most talented drivers," he said.

Indeed, just a year ago Raikkonen was often outshining Vettel at Ferrari.

"It is up and down, but in general as the season progresses, the situation stabilizes," Vettel continued.

"I don't think Kimi has had the races yet that he deserves."

While the faster and more aggressive looking cars have been generally hailed, some have lamented the fact that passing – already rare in F1 – has now almost completely disappeared.

"These people are crazy," Lauda, the F1 legend and Mercedes team boss, told the Times newspaper.

"These cars are proper racing cars. They do overtake and to count overtaking action to make an interesting race is stupid."

Force India deputy Bob Fernley agrees, saying that while the actual overtaking count may have gone down, passes are now more "impromptu" and less DRS-dependent, which is "exciting".

"I was concerned but those fears have been allayed," he said. "It's definitely better than I thought it was going to be."

Sergey Sirotkin is set to receive another opportunity to drive the R.S.17 during practice for the Spanish Grand Prix, after his outing on home soil in Russia was cut short.

Sirotkin, having appeared on the second day of the Bahrain in-season test, will get his next run during the first practice session in Barcelona in two weeks' time.

"It was a short run for me in FP1, but that's motorsport and it's better to have an issue with the car in practice than in qualifying or the race," said Sirotkin.

"There's not much I can say about [the session] other than I was happy with the car at the Bahrain test and I was fully prepared to deliver everything required.

"I'm next out in Spain so that's where my focus now lies."

HÃ¼lkenberg and Jolyon Palmer ended Friday's second session eighth and 13th fastest respectively, with almost half a second between the pair.

Renault has changed the chassis on Palmer's car for the remainder of the weekend after it received a lot of heat caused by an exhaust leak.

Ferrari have used six turbochargers, three per car, so far this year but the team’s engine chief Luigi Fraboni insists that these are merely precautionary measures and does not envisage the team incurring grid penalties as a result

Fraboni told ESPN, “At the moment we are facing the first races with some small problems that we are analysing and the changes we have done so far for the engine and the turbo are just to be cautious because we are in a strategic part of the season and we don’t want to make a mistake at the moment."

“What we have seen at the moment is that we should be within the fourth element of each component of the power unit up until the end of the season."

Current Formula 1 regulations allow a maximum of four engine component changes during the course of a season, of which the turbo is one of those components.

Theoretically Ferrari have one turbo or component change allowed to the power unit, per car, for the remainder of the season, however they can also revert to the replaced turbos should the need arise without incurring a penalty.

“Of course if you have used three turbo it means you are missing one. Then we will do the development we can for the missing one, but for us it was important to do what we have done for the moment, as I said, for a strategic reason," added Fraboni.