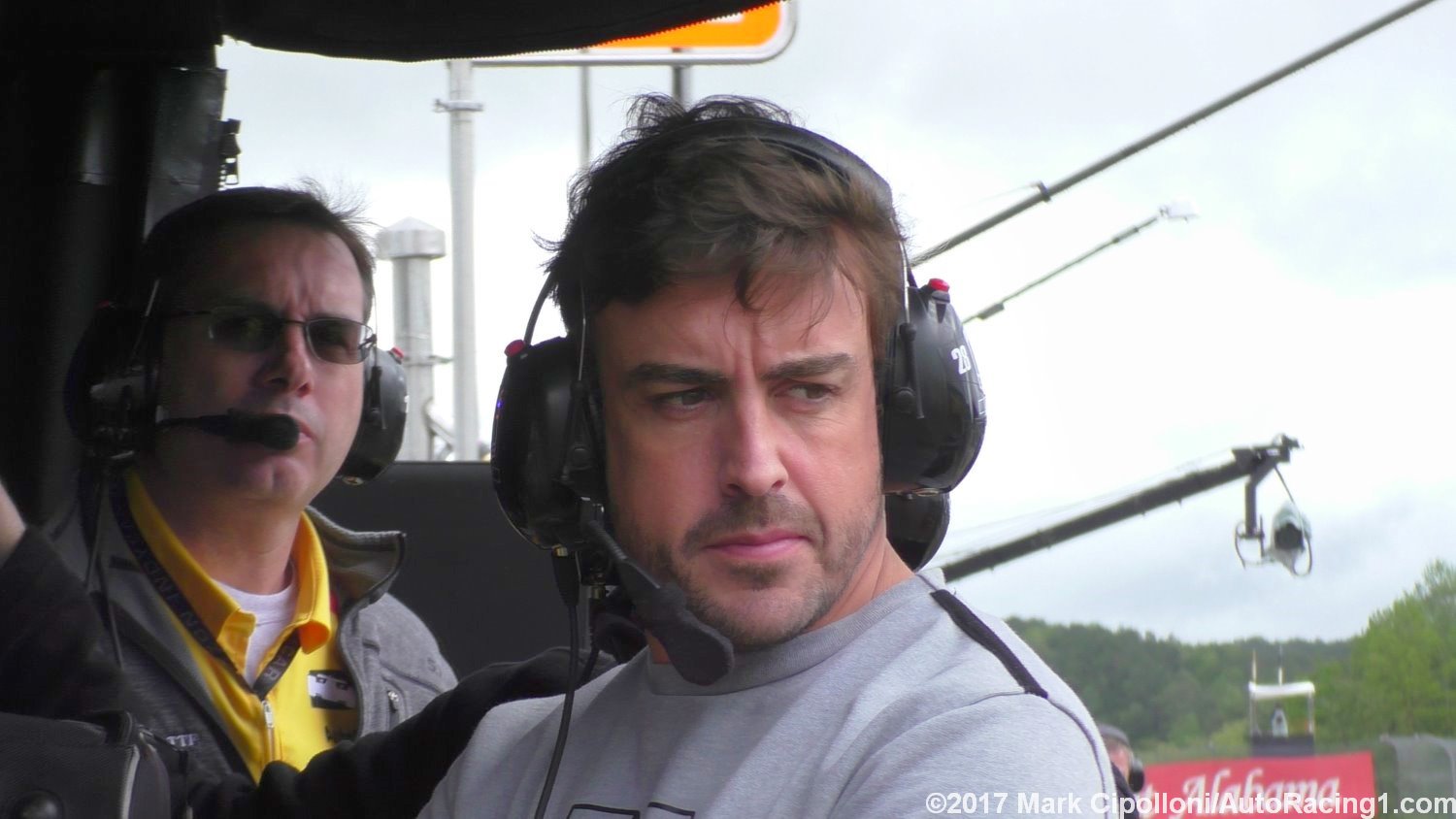 If nothing more can be gleaned from Fernando Alonso’s visit today to Barber Motorsports Park – and his plan to race in the 101st Indianapolis 500 presented by PennGrade Motor Oil on May 28 – it’s that racers share one goal: to be faster than the rest, no matter the car or venue.

And to do that, they occasionally need assistance from other racers.

The two-time Formula One champion explained that he’ll need help to be competitive at Indianapolis next month, so he’s relying on his four temporary teammates at Andretti Autosport – Ryan Hunter-Reay, Marco Andretti, Alexander Rossi and Takuma Sato – to help him get up to speed.

“I need to learn all of these things," Alonso said during an interview session with four motorsports journalists in the Andretti Autosport hospitality transporter. “To learn them alone would take two years. To learn it with some help would take six months. But I have two weeks. I will need a lot of help."

Alonso has 32 F1 victories and championships in 2005 and 2006 to his credit. Aside from some Indy 500 warmups on a simulator in Italy, though, he has no experience with Indianapolis Motor Speedway, oval tracks or Indy cars.

Asked if he expects to be up to speed quickly when 500 practice opens May 15, Alonso joked, “It depends on what you call speed."

Alonso met his teammates Saturday night after arriving at Barber to watch today’s Honda Indy Grand Prix of Alabama presented by America’s First. From there, he’ll travel to Andretti Autosport headquarters in Indianapolis on Monday for a seat fitting and more time on a simulator. He’ll then travel to Sochi for next weekend’s Russian Grand Prix and his fulltime job with the McLaren Honda F1 team before returning to Indianapolis Motor Speedway for a solo test in the McLaren-Andretti Honda on May 3.

That’s when the sorting of the details will commence.

“The setup of the car is extremely important, because the difference is in milliseconds," Alonso said. “To set up the car for different parts of the race in different wind direction and fuel loads in the car, tire degradation – there are many things that you need to make small adjustments, apparently, that I have no idea about."

His new teammates think he’ll find speed quickly, but the minutiae of racing at 220-plus mph on IMS’ unique, 2.5-mile squared oval will take more time to learn.

“Once he gets his first few runs in the car and settles into a rhythm and we start trimming the car, he’ll start asking questions," said Hunter-Reay, who won the Indy 500 in 2014. “It will take him a while to adjust to the open atmosphere that we have at Andretti Autosport. Formula One tends to have more walls put up around the drivers, so that will be the first thing – getting him used to (sharing information). He’s going to be turning left at 230 (mph) with a wall coming up at him. There are going to be a lot of things that are a lot different for him."

While Rossi and Sato have Formula One experience, Team Penske’s Juan Pablo Montoya could be Alonso’s most valuable muse. The two raced against each other in F1 from 2001 until 2006. Montoya won the Indy 500 in 2000 before departing for F1, then won it again in 2015.

When asked during a news conference today if he feels he’ll be competitive against Montoya, Alonso joked, “I don’t know if he will be at the front."

On Saturday, Montoya was open with his advice for Alonso.

“The biggest challenge is going to be, first, he has never done a race that is that long, and the traffic," Montoya said. “He is going to have to learn and understand the traffic. I think if he is patient enough through the week and builds to it, I think he will be fine. He is a really good driver. He has really good teammates. People have run at Indy before and run well. There is no reason why he shouldn’t run well."

For now, Alonso is just taking as much in as he can and relying on his fellow racers in the process.

“There are many, many things – more than people can imagine," Alonso said. “There are little things when you’re driving at those speeds and you have all those things going on – the radio, etc. – but we are professional drivers and we should be able to deal with it." Jeff Olson/IMS News