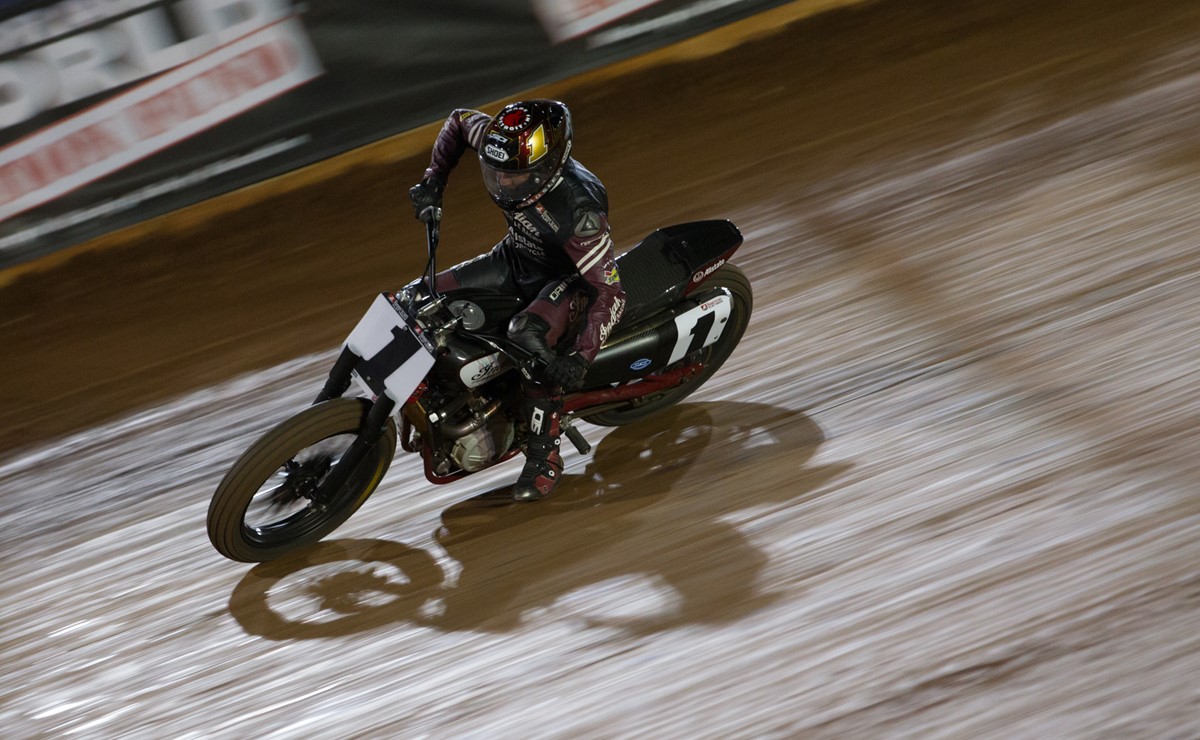 “We didn’t qualify fastest, but once we got racing, I felt comfortable," said Smith. “I feel like in any race if I can beat Jared (Mees), I can win the race, and if I beat him, I can win the championship. I’ve got to get back to doing it more often. I especially wanted to win today, because we’ve got some bragging rights going into the mini off-season before we get to the miles. Hopefully, we can pick up where we left off last year in the miles – winning."

Mees would have preferred to add another win to the ones he racked up at the Harley-Davidson DAYTONA TT and Atlanta Short Track presented by Indian Motorcycle at Dixie Speedway, but at the end of the day Mees leaves Charlotte with an eight-point lead in the championship. The evening also marked Indian Motorcycle’s third consecutive 1-2 finish, which could’ve very well been another back-to-back podium sweep if Smith’s teammate Brad Baker on the No. 6 Indian Scout FTR750 hadn’t suffered the bad luck of a mechanical before the halfway mark.

“You can’t win them all, and I was glad to see Bryan (Smith) get the job done on the Indian Motorcycle," Mees said. “So far, Indian’s won all three Grand Nationals. It’s a shame for Brad (Baker), because I think we would have had an all-Indian podium again. Tonight I knew we were a tick off, so we made some changes to try to turn it around. I got a good start but had a bad first lap. When Bryan got up to the lead that kind of left it to Brad and I to dogfight for second. I just started clearing Brad when his bike went off, but by that time, Bryan was already 10 bikes ahead. I tried moving around the race track to catch up, but I was losing ground. The best guy won tonight, and it was Bryan."

Joining the Indian Motorcycle duo on the podium was Sammy Halbert on the No. 69 Estenson Logistics Harley-Davidson XR750R. Halbert went into Charlotte looking for the win that slipped his grasp last weekend in Atlanta, but was happy to leave with a podium finish for his new team.

“It felt good to get up on the podium. First podium of the year, first one with the new team," Halbert said. “These guys, Estenson Racing, have been putting in so much hard work so it feels great to reward them with a podium."

Gauthier Captures Third Straight Win In AFT Singles
Dalton Gauthier (No. 22 Estenson Racing Yamaha YZ 450F) took his third consecutive victory in AFT Singles competition, leading flag-to-flag in a race slowed by a pair of red flags for multi-bike incidents. The Pennsylvanian pulled away on both restarts and led Brandon Price (No. 92 Kawasaki) to the checkered flag by 1.035 seconds.

“I’ve finally got good equipment this year, and my bike was working really good tonight, thanks to my dad," said Gauthier. “We have a really strong team this year, and three in a row is pretty sweet. Hopefully we can make it a grand slam in the Singles class and win the next race at the Arizona Mile like we did last year."

After competing on three consecutive weekends, American Flat Track now takes a six-week break before its next event, the Law Tigers Arizona Mile presented by Indian Motorcycle on Saturday, May 13, at Turf Paradise in Phoenix. That race begins a four-week stretch of consecutive races on Mile tracks. Last year, Smith scored three of his four victories en route to the title on Mile tracks.