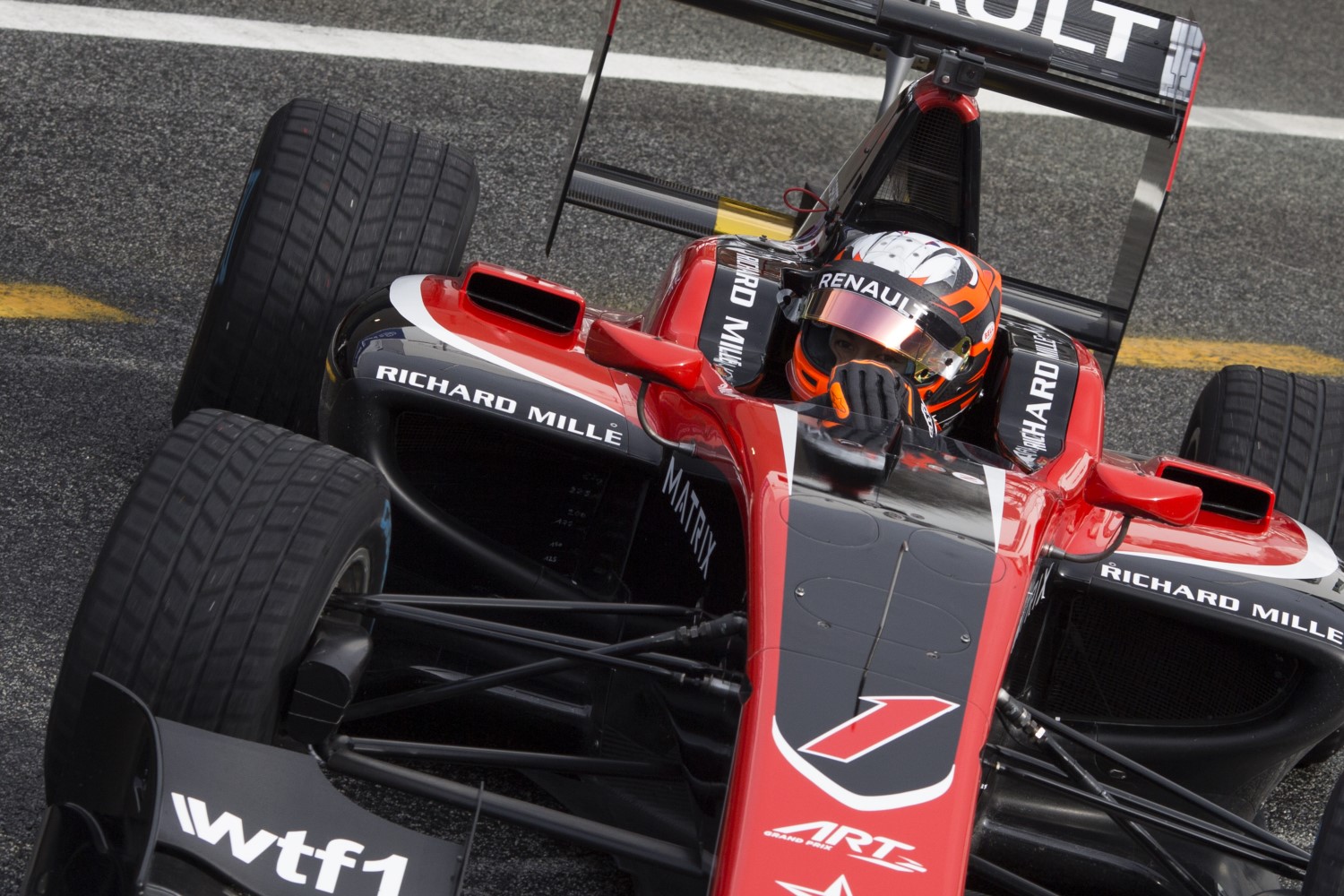 Jack Aitken has grabbed the day 2 bragging rights by topping this afternoon’s session in mixed conditions on the final day of the first GP3 Series test session of 2017 at the Circuito de Estoril, easily surpassing George Russell’s best time in wet conditions this morning with a laptime of 1:28.125, but Russell claimed the overall honors with the best time of the test at 1:27.606, set yesterday afternoon.

The GP3 paddock was greeted by rays of sunshine this morning to open day 2 of pre-season testing, but grey clouds made their way across the Portuguese track minutes before the pitlane turned green. As the cars fed onto the track, rain drops fell from the sky and the session was soon declared wet.

There was an early red flag period after Raoul Hyman stopped at Turn 3. When the proceedings resumed, Alessio Lorandi set the pace, but his time was bettered first by Niko Kari and then by Russell who posted his best laptime after 45 minutes.

On the one hour mark, the session was briefly halted when Julien Falchero stopped on track with a broken suspension. The weather conditions improved slightly but remained cold and windy. There were two more red flag periods courtesy of Tatiana Calderon and then Nirei Fukuzumi.

At the checkered flag, Russell sat pretty at the top of the timesheets ahead of Anthoine Hubert, Lorandi, Fukuzumi, Jack Aitken, Ryan Tveter, Kari, Steijn Schothorst, Hyman and Giuliano Alesi.

The afternoon session opened under blue skies. Schothorst was the first man to take to the track on slick tires and set the pace in a 1:37.326, but fifteen minutes into the session rain started to fall hard over the circuit, sending the few cars scurrying back to the pits.

After a quiet period waiting for the rain to stop, Kari led the rest of the pack back on track. The proceedings were halted after Hyman went off track at Turn 7 and clipped the barrier, although the Campos tester could at least rejoin the session. On a drying track, he switched to slick tires to take the top spot, but Lorandi also improved and went half a second quicker with one hour left on the clock.

Marcos Siebert was the first man to dip under 1m30s, but the top spot then switched hands between Russell, Maini and Alesi with the Briton able to eventually break the 1m29s barrier just before another short shower.

In the dying minutes, Schothorst, Alesi, Fukuzumi and Aitken improved. The latter set his best laptime of 1:28.125 just before a final red flag caused by Calderon and Bruno Baptista, who went off track at Turns 1 and 13 respectively, effectively ending the day.

The teams will now head back to their factories and start working towards the next test, which will open in just under a month’s time in Barcelona, Spain on 19-20 April.