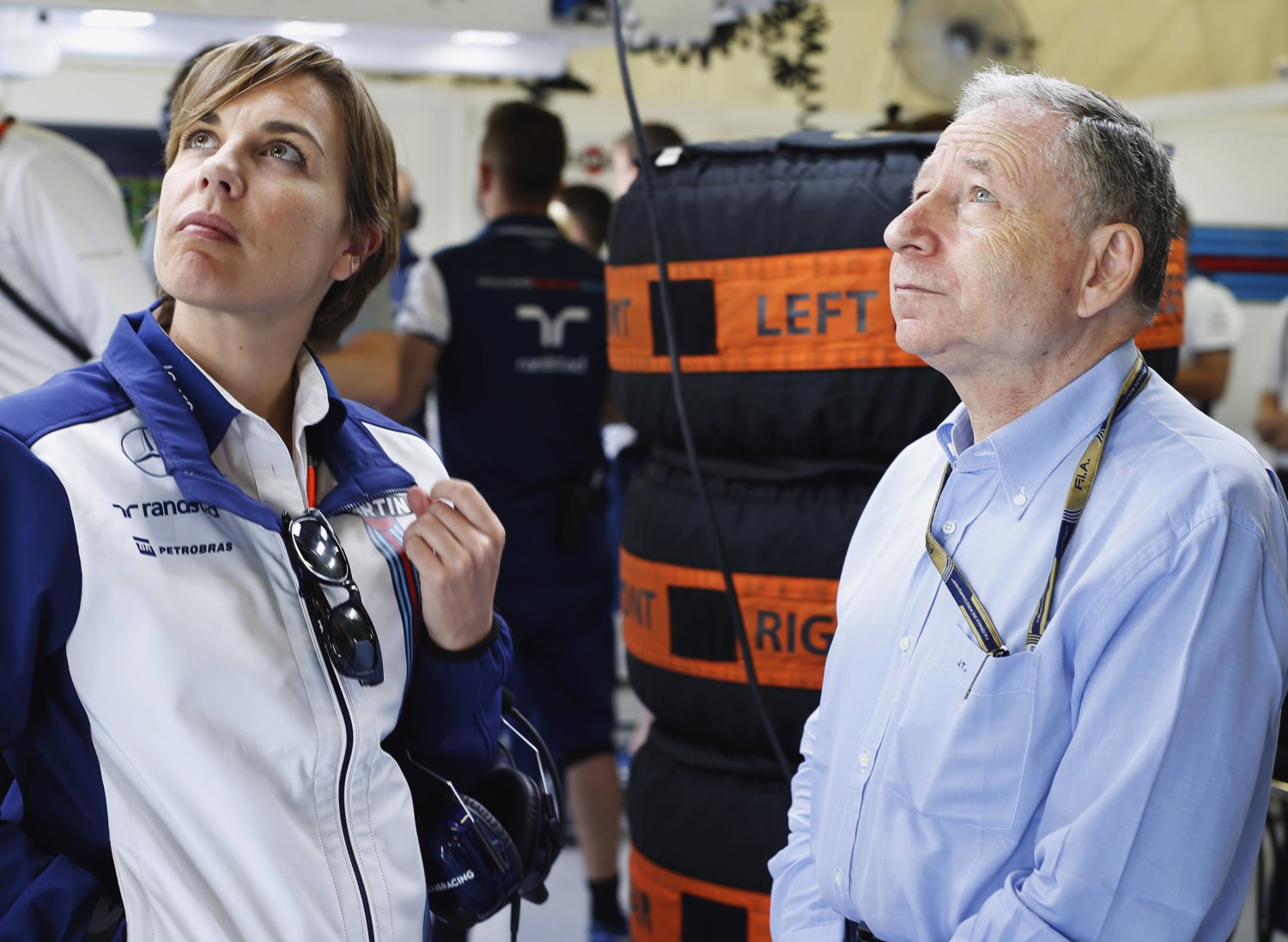 The volume, complexity and expense of the current 'power unit' technology has been controversial since its inception, and talks about the rules beyond 2020 are set to begin.

But Brawn, who is F1's new sporting boss, said this week that going back to V8, V10 or V12 technology is "unthinkable".

"However, we are thinking about the evolution of the hybrid engine," he said.

Now, FIA president Todt has backed Brawn's prediction about the future of the F1 power unit.

"Everybody's vision is to try to do better for formula one," the Frenchman is quoted by the German news agency SID.

"We must think about new opportunities and innovations, and always look forward. But it is unthinkable to leave the hybrid engines — the V10 and V12 of the past should stay in the past, even if it is unreasonable to spend money each year on new technologies," Todt added.

"They have new ideas and are very professional, and will create new opportunities for communication," said Todt.

"The new cars? I think we will see a good show. Bernie Ecclestone gave a lot to formula one, but he gained a lot as well. Now I hope that at 86 he is happy to see his child in good hands," he added.

Finally, Todt spoke about the forthcoming FIA presidential elections, saying it is not a certainty that he will run.

"If there are younger people who want my place I'll have to think seriously," said the 71-year-old.

Schumacher's 'favorite' uncle dies
(GMM) The Schumacher family is grappling with its latest blow, as the F1 legend's uncle passes away.

Bunte, a German weekly news magazine, revealed that Karl-Heinz Schumacher – the brother of Michael's father Rolf – has died after a battle with cancer at the age of 64.

The publication said that, like the former Ferrari and Mercedes driver's father, Karl-Heinz was also a bricklayer and Schumacher's 'favorite uncle'.

Bunte said Karl-Heinz was particularly close to Michael, as he took care of his mother Elisabeth after her marriage breakdown in 1997. It is also said that Karl-Heinz discovered Elisabeth after she collapsed at home in 2003 and later died.

A family friend told Bunte: "It's terrible. The suffering of the family simply does not end.

"Since Michael's accident everyone is already very sad, and now Karl-Heinz has died. Luckily, his (Schumacher's) mother does not have to go through it."

(GMM) 2017 title favorite Sebastian Vettel has continued his tradition of naming his formula one car for the forthcoming season.

The German always gives his single seater a female name, and this year his 2017 Ferrari is called 'Gina', according to the German newspaper Bild.

"The name is Latin and is short for Regina, meaning Queen," the newspaper said.

"Will Gina take Vettel to his next coronation?" Bild wondered, referring to the quadruple world champion.

"At the Barcelona test I saw the Ferrari performing well on long, high-speed corners, meaning the car has efficient aerodynamics," he told France's Auto Hebdo.

"That is a good sign. Of course, tire choice, engine tuning and fuel all affect the testing results, but it does seem to me that the Scuderia is in good shape," Prost, now an advisor for the works Renault team, added.

Others, however, think Mercedes is still ahead of Ferrari.

"Ferrari and Red Bull are a few tenths behind them," predicted former F1 driver Alex Wurz, in conversation with Sport1.

(GMM) Toto Wolff says his relationship with Lewis Hamilton is "stronger" ahead of the 2017 season.

There were obvious tensions in the silver camp after the Abu Dhabi finale last November, when Lewis Hamilton ignored team instructions to not hold up eventual champion Nico Rosberg.

"Yes, it was definitely hard," Hamilton is now quoted as saying by the German broadcaster RTL.

"But now I am fitter, I've worked harder than ever before, and I am super-focused," the triple world champion added.

Team boss Wolff agrees that the turmoil of the 2016 championship outcome is now in the past.

"After Abu Dhabi, it was certainly a tough time for him, but like many top athletes he has been able to digest things and prepare well for the new season.

"Our relationship has grown stronger through these incidents," he insisted.

But former F1 team chief Eddie Jordan thinks Hamilton actually lost the 2016 title due to letting his focus and motivation slip in the mid-season period.

"It was unprofessional," Jordan told the Times newspaper.

However, F1 legend and Mercedes team chairman Niki Lauda thinks Hamilton is having no such motivation problems.

"I say no," the great Austrian told Auto Bild.

"Lewis will be highly motivated to win his fourth world championship, so he can catch up with Vettel. It is of particular importance to him," Lauda said.

(GMM) As excitement builds for the new era of F1, German official Hans-Joachim Stuck thinks the sport has taken a wrong turn.

Amid criticism of the spectacle in the last few years, the teams have arrived in Melbourne for the 2017 season opener with much faster cars in their luggage.

"This idea was proposed by Bernie Ecclestone and approved by the strategy group," the retired Williams technical chief Pat Symonds is quoted by L'Equipe.

"The idea was to make it much harder for a 17-year-old to make his debut and be successful, but the facts show that young drivers can cope with the new cars."

The 2017 cars were given their 5 second per lap boost thanks to wider Pirelli slicks and – for the first time in F1 history – aerodynamic rule changes that actually deliver significantly more rather than less downforce.

But former driver and German motor racing official Stuck thinks speeding up the cars with better aerodynamics was the wrong route.

"It's not just the cost, aerodynamics just makes the races boring," he told the German business magazine Sponsors.

He is referring to 'DRS', because even though F1 chief Ross Brawn wants to eventually ban the artificial overtaking aid, there are rumors a lack of overtaking in 2017 will mean DRS is actually revved up within a few races this year.

Ricciardo gets Renault boost for Melbourne

As the Australian met with the local press ahead of the 2017 season opener, it emerged that Renault has solved the recurring reliability problem with its new power unit.

Auto Motor und Sport correspondent Michael Schmidt said: "In the Barcelona tests, the Renault teams had to use throttled performance most of the time."

Red Bull – the most competitive Renault-powered team – was a few tenths off the pace of Mercedes and Ferrari through the winter, so the news will be music to Ricciardo's ears.

Asked by local media how confident he is for the 2017 title battle, Ricciardo told Fairfax Media: "Very confident.

"If we have the package to be in the mix, then I definitely feel I can do it."

Renault entered testing at the Circuit de Barcelona-Catalunya wary that it had an issue with an element of the ERS, the problem having shown up on the company's dyno.

Taffin expressed confidence that a fix could be put in place in time for the season-opening Australian Grand Prix, and Abiteboul has now confirmed that the issue has been rectified.

"We have addressed the ERS issue which caused us reliability concerns and do not expect to see a repeat of it in Australia," said Abiteboul.

"There is a balance between pushing the envelope of performance and maintaining the requisite reliability and the trick is to stretch the margins without overstepping them.

"We know we have a strong base with the R.S.17 which puts us in good stead for the relentless development race we expect to see.

"We are confident in the abilities of the team to improve and develop the car over the year."

Abiteboul added that Renault is aiming to secure top 10 finishes at every round this year, as it bids to improve on ninth in last year's standings.

"Our own target for Albert Park is the same target we will have for every race this year: points," he commented.

"We want to score points throughout the year so when the final tally comes we have finished fifth in the Constructors' Championship.

"It will be a long battle, but we know what we need to do."

The FIA has confirmed that it will implement tweaks for the Thursday Press Conference format in Formula 1 for the Australian Grand Prix.

Last year's format, which featured six drivers facing assembled media for around half an hour, occasionally drew criticism, most notably from Lewis Hamilton in Japan.

Under the revised format, eight drivers will attend the Thursday Press Conference, split into two groups of four.

The first group will attend the Press Conference while the second group will be available for broadcast media, before the groups will switch, each segment lasting 25 minutes.

For this weekend's Australian Grand Prix, Fernando Alonso, Lewis Hamilton, Daniel Ricciardo and Sebastian Vettel will be present in the Press Conference for the first 25 minutes.

They will then speak to broadcast media, while Valtteri Bottas, Felipe Massa, Esteban Ocon and Lance Stroll will head to the Press Conference for the remaining 25 minutes.

Honda 'spending what it takes' to resolve issues
McLaren boss Zak Brown has said Honda are doing all they can to try and ensure that the team are competitive at the Australian Grand Prix and beyond.

Two double breakdowns on the final days of Winter Testing only added to McLaren's misery in Barcelona, with Fernando Alonso and Stoffel Vandoorne massively restricted throughout the eight days at the Circuit de Catalunya.

Since then, there has been plenty of rumours circulating that McLaren have been exploring the possibility of returning to Mercedes as their engine supplier, but Brown insists Honda are committed to using their resources to fix the long-standing problems.

"Our communications are with Honda and we're trying to figure out with Honda what's the best long-term strategy but also we need some short-term results," Brown told RACER.

"So I'm going to keep our solutions that we're working on with Honda to ourselves.

"We need to fix our situation quickly, so we're looking at all the different ways to do that.

"We've got a long history with Honda, they're spending what it takes, they're committed, so they're the right partner. We've just got a technical glitch that we need to work through very, very quickly."