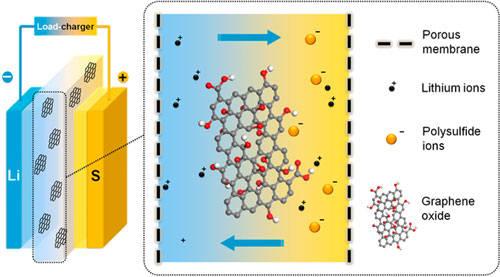 Researchers have developed a new component that could heal the Achilles' heel of lithium-sulfur batteries.

Compared to the common lithium-ion battery, lithium-sulfur batteries have important advantages: They use cheaper materials and weigh less. A lithium-sulfur cell can have almost double the energy of a lithium-ion cell for the same mass, yielding an edge where energy density is critical, like in portable electronics or in cars.

However, over a few charge and discharge cycles, lithium-sulfur batteries gradually become unstable, and their electrodes break down, a flaw that has kept them from taking the energy storage throne.

In particular, ions of lithium react with sulfur to form compounds that migrate and reduce the capacity of the cell.

"When this happens, they clog the surface and prevent the lithium from getting within the cathode," said Victor Batista, a professor of chemistry at Yale University.

Previous efforts to stabilize lithium-sulfur batteries involved protective coatings that added to the weight of the device and made other significant performance trade-offs.

In a study published yesterday in the journal Proceedings of the National Academy of Sciences, Batista and his collaborators unveiled a thin composite film that gave lithium-sulfur batteries exceptional durability.

The researchers first simulated what kinds of materials and structures would work well to make lithium-sulfur cells last longer, computing how molecules in the cathode would interact with different materials.

The team then made the film from graphene, a one-atom-thick carbon structure, and an organic dendrimer, a polymer that has a tree-like branching structure. Results showed that the film had an average thickness of 90 nanometers.

"The amazing thing is that with these materials, we were able to make batteries that have a record of stability with a minimum amount of membrane," Batista said.

Co-author Jianbing Jiang, a postdoctoral researcher at the Energy Sciences Institute at Yale University, noted that the composite film was made from commercially available starting materials, which would make it cheap and easy to scale up.

"Theoretically, the preparation of this material is quite easy and straightforward," he said.

The researchers noted that they are still in the preliminary stages of this work and are now working on ways to improve the performance of lithium-sulfur batteries even further. "From there, we can design new materials with even better performance," said co-author Ke Yang, also a postdoctoral researcher at the Energy Sciences Institute.