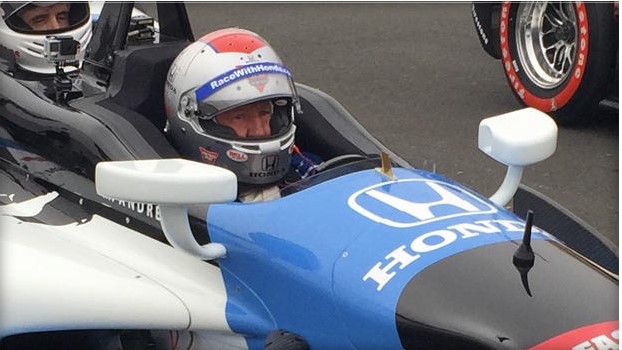 Auto racing legend Mario Andretti stepped away from driving full time in 1994, but even now at 77, he's able to push a racecar to 180 mph, as he shows Mo Rocca (pictured below, with Mario) during an interview for CBS SUNDAY MORNING to be broadcast Sunday, March 19 (9:00 a.m. ET) on the CBS Television Network.

"I just love my driving," Andretti says after giving Rocca a high-speed thrill ride around the Sonoma Raceway. "I just can't get enough. I'm an adrenaline junkie. You know, and without adrenaline I'd die."

Andretti is far from giving up on his adrenaline fix. He is still involved in the sport that made him an international superstar, but more as an advisor than a driver. His grandson Marco Andretti drives in the IndyCar series on a team run by Mario's son Michael. And Mario says he still gets excited on race day.

"To me, in all the years I've driven, you know, the hundreds of races I've driven, it's never blase, it's never, you know, always it's the same experience," Andretti says. "Always said when I was younger, I said, some day when I become more mature I'm going to lose those butterflies, and I never did. From the first race to the last race, I had those same butterflies, and you know why? Because it meant something to me."

Andretti is considered one of the best drivers to have ever buckled into a racecar because he was able to win in a variety of car styles, tracks and formats across the United States and around the world.

In a wide-ranging interview about his career and life today, Andretti talks about breaking into the sport, how he was able to succeed and the inherent risks of the sport that took the lives of some friends and severely injured others along the way. Rocca also talks to Andretti's wife of 56 years, Dee Ann, who opens up about life with a racecar driver.

In explaining the appeal of the sport, Andretti compares racing to animal training.

"If you can make a tiger or something that can destroy you purr, you're a damned good animal trainer," Andretti tells Rocca. "And this is the same thing. You gotta make that car that can destroy you, you know, purr, make it do the things you want it to do."

CBS SUNDAY MORNING is broadcast Sundays (9:00-10:30 AM ET) on the CBS Television Network. Rand Morrison is the executive producer.