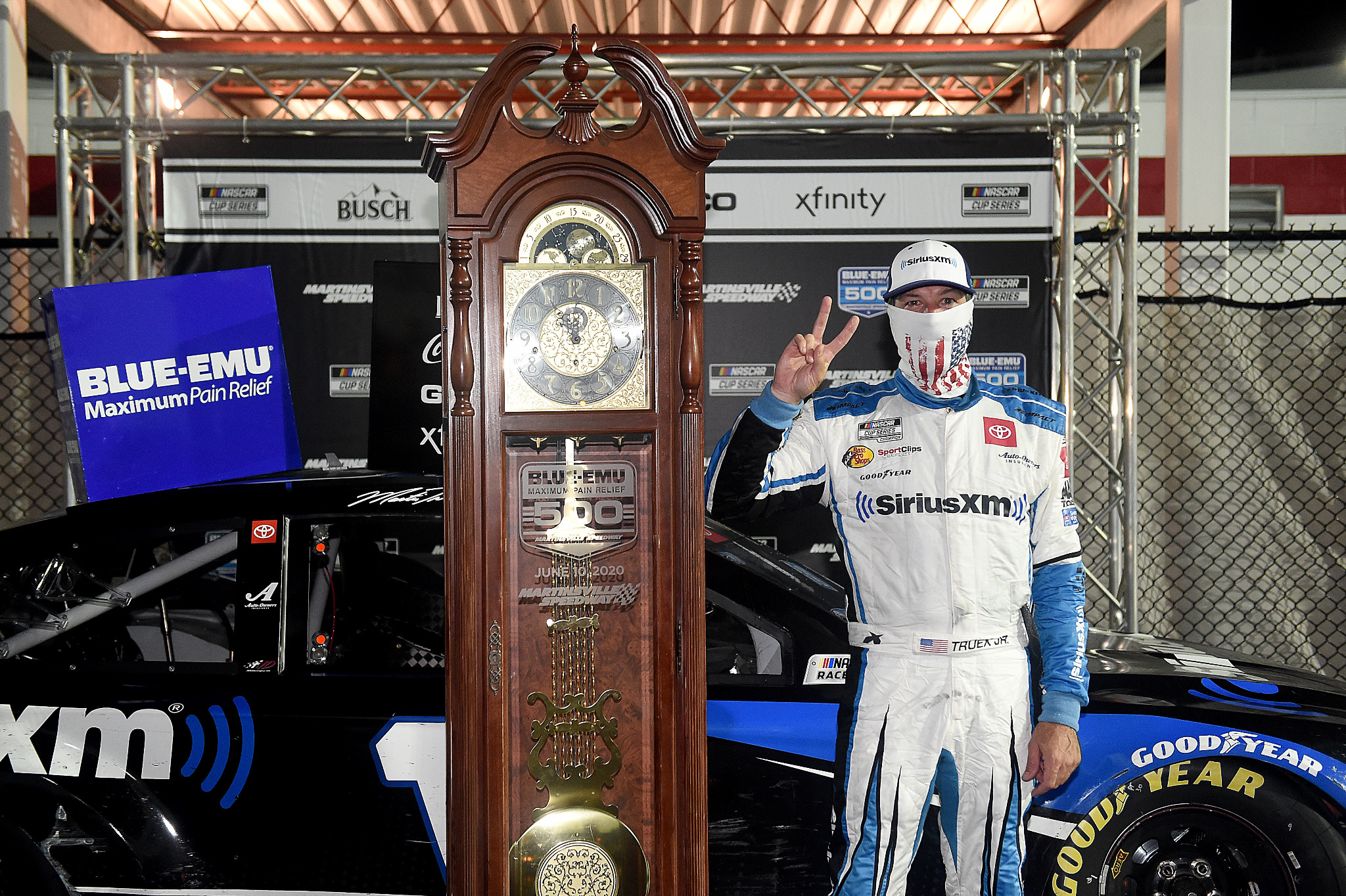 Compared to his dominating victory at the half-mile track last Fall (he led 464 of 500 laps), Truex had to negotiate and muscle his way to the front this time.

“We’ve been working a long-time on trying to figure this place out and just been chipping away at it,” said Truex, who drives the No. 19 Joe Gibbs Racing Toyota Camry.

“The last couple years we’ve been really strong. 2018 was a heartbreaker at the end of the race there. Last year to get the win and this year, hats off to the guys.”

All three Team Penske cars hounded Truex and kept him honest, ready to seize upon any late race slip-up or lapse in concentration. But the 2017 series champion Truex was strong and determined, earning his first victory of the season in the first official NASCAR Cup Series “night race” since the historic track installed lights in 2017.

Penske teammates Ryan Blaney, Brad Keselowski and Joey Logano finished second, third and fourth. They combined to lead 273 laps with Logano’s 234-laps out front, the most for any driver on the night.

Bubba Wallace, who drove the famed No. 43 for Richard Petty Motorsports, earned his career-best NASCAR Cup Series finish at Martinsville (11th) – he and Johnson had a close competition for the 10th-position in the final laps.

“All in all, great job to come here and execute with no practice,” said Wallace, who has two NASCAR Gander RV & Outdoors Truck Series wins at Martinsville. “My favorite place and it just continues to show.

“I’ll tell you what was badass was to race with ole seven-time (Johnson) there at the end. You think Jimmie Johnson wins so many times here and we’re running him down. Hats off to my guys. Good job fellows.”

At times it felt like three distinctive races in one. Logano won the first stage handily leading the way. Johnson won the second stage – his 70 laps out front the most he’s led in a single race since 2017. And then Truex took control of the third stage and was able to keep the field at bay and pull out to a comfortable lead. It was a tame night by short track standards with seven total caution periods– three for single-car incidents on track.

Truex’s good fortune was in stark contrast to his Joe Gibbs Racing teammates who suffered through a long night of frustration. Reigning series champion Kyle Busch went a lap down early and finished 19th, just ahead of teammate Erik Jones. Denny Hamlin – a two-race winner in 2020 – reported problems with his No. 11 Toyota almost immediately after the green flag dropped and went three laps down by night’s end, finishing 24th.

Tyler Reddick’s 16th-place finish in the No. 8 Richard Childress Racing Chevrolet made him the top-finishing Sunoco rookie.

Kevin Harvick’s 15th-place finish marked only the second time in the season’s 11 races that he did not finish among the top-10, but it was still good enough to retain the championship lead – by 28 points over Joey Logano and 47 points on third place Chase Elliott.

What is it about you, this team and Martinsville Speedway?

“We’ve been working a long time at trying to figure this place out and just chipping away at it. The last couple years we’ve been really strong. 2018 was a heartbreaker at the end of the race there. Last year to get the win and this year, just hats off to the guys. We started the first run and it pushed the right-front tire off and we were terrible. Really good adjustments from the guys, just want to thank all of them. SiriusXM, Bass Pro, Auto Owners and everybody that makes this possible – TRD. Congrats to James (Small, crew chief) on his first win. He’s doing an awesome job and really proud of him. It’s a big day for us. I want to say hi to all the fans at home, we definitely misss you. This just doesn’t feel right, but exciting to win for sure.”

How hot was it during the race?

“It was really hot. I don’t know if it’s just going back to this aero package, but this car felt a lot hotter than I expected it to. It’s not that hot outside, but all in all, we did what we had to do and I’m just really proud of my team. Thanks to everybody back at JGR for working through all these tough times and everything else. I don’t even know what else to say, kind of speechless. It feels a little strange out here to be honest.”

How much does it mean for James Small to get his first win as a crew chief?

“It’s huge for his confidence. I knew we would get one soon. The last couple weeks at the end of the race, we have a group text and I would say, ‘Our win’s coming soon guys, keep it up.’ Just so proud of them, we have an awesome team. Really proud of those guys. Nice to get another win early in the season and hopefully now we can get on a roll.”

How much did you work on the car from the beginning of the race to get a race-winning car?

“We never quit on it, we never gave up on it and we worked hard. The first run of the race when the track was green, we pushed the right-front tire off in 30 laps and I was like, ‘oh man, this is going to be a long night.’ From there on we just kept making adjustments. We got up towards the front and then we had a pit road penalty and had to go to the back. It was really, really difficult to get through the field. Once we got near the front, I was like, okay we got something. Then we made one more adjustment and the thing took off. Just happy for all the guys. To have SiriusXM come on board for five races this year, proud of that and Bass Pro, Auto Owners, TRD, True Timber, Beechcraft – everybody that supports us and makes this car go around the track, I have to thank them. Obviously everybody at JGR working through a lot of weird things with the social distancing and the Coronavirus and all that stuff going on. Really proud of the effort. I knew we were knocking on the door the last month, we just had to get things to go our way and tonight we made the right calls.”

What does it mean to have James Small get his first win tonight in this role after being with you so long?

“It’s huge for him and his confidence and for the way people look at him. I think it’s huge. I knew all along that he was capable, I know he’s going to be an amazing crew chief for a long time to come. I’m proud to have him on our team and he’s a great leader, great guy, great friend and really proud of him for his effort.”

What has made you such a good short track racer?

“Just team belief. We started on a path five years ago at Furniture Row with a team that believed in me and they were going to make the cars do what I wanted them to do, the way I needed to drive them. They were going to make them handle the way I needed them to handle. We just continue year after year to continue to work on those things. Martinsville is a perfect example. We had a heartbreaker in ’18 and should have won. Last year, we come back and we finally do win and then tonight to come from the back of the field mid-race. We keep working on the things that make us successful and that’s what’s so good about keeping such a great team together like we have.”