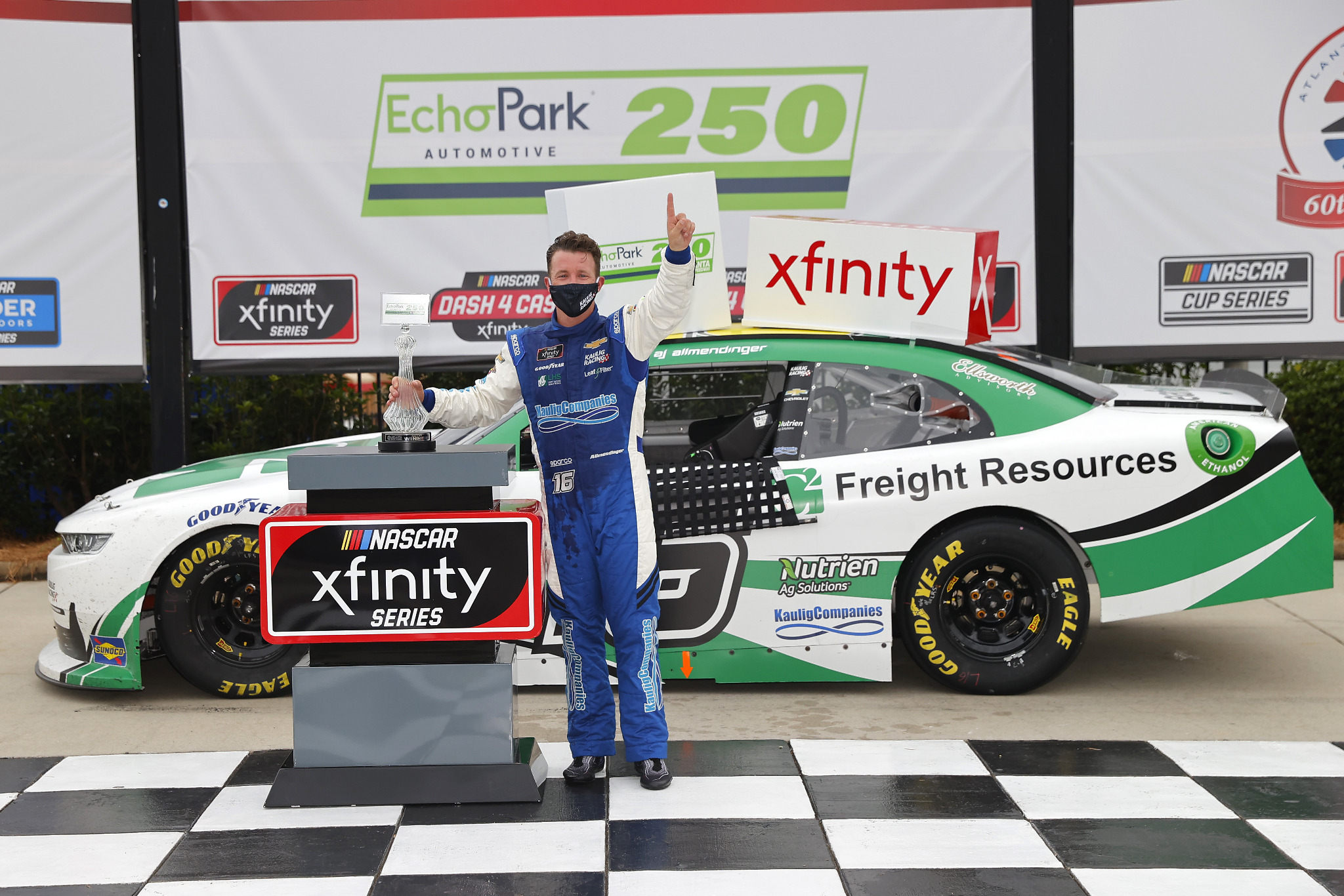 A.J. Allmendinger made the most of other driver’s misfortunes to score the victory in Saturday’s NASCAR Xfinity Series race at Atlanta Motor Speedway.

Allmendinger inherited the lead when three of the fastest cars on the day – Chase Briscoe, Austin Cindric and Justin Allgaier – were all hit with speeding penalties on the final round of pit stops on the day.

Allmendinger powered to the lead on the final restart, and drove away from the competition en route to his fourth career series win.

It marks the first ever career win on an oval track for the 38-year-old, who can boast wins on road and street courses in various forms of motorsports – including a win in the Rolex 24 at Daytona in 2012.

"Oh my God, I won on an oval! You like that?" said Allmendinger after climbing from his car on the front stretch.

The win comes in Allmendinger’s first series start at Atlanta. He can boast 13 NASCAR Cup Series starts at the speedway, with a best finish of sixth coming for Richard Petty Motorsports back in 2010.

"It's Atlanta, so you're trying to figure out how much tire to use early," said Allmendinger. The car was awesome one long runs. The car was better than the driver early, too, especially. But once I got in the lead, just tried to hit my marks, which is hard to do."

[adinserter name="GOOGLE AD"]The victory comes as Allmendinger is running a limited schedule for Kaulig Racing. He made his first start of the year last week at Bristol, where he recorded a 10th place finish.

"(I) can't thank everyone at Kaulig Racing, Leaf Filter gutter protection, just everybody that's associated with this team," Allmendinger said.

"We fought a lot of adversity out there," said Gragson. "I drove through two many pit boxes on one of the pit stops and had to go to the back. But this Axalta, Echo Park team never gave up."

With about 38 laps to go, Chase Briscoe looked to have the win in hand. After chasing leader Austin Cindric through much of the race’s second segment, Briscoe’s crew got him off pit road first after the end of the segment.

Briscoe then managed to get away from Cindric, who appeared to have the dominant car through the first half of the race.

Briscoe held a healthy lead until a spin on lap 124 by Vinnie Miller brought out the final caution of the day, with the leaders hitting pit road for their final stops.

Briscoe’s team again got him off pit road first, with Justin Allgaier following in second and Allmendinger in third.

That’s when the wheels came off for the three strongest cars in the field, as Briscoe, Allgaier and Cindric were all slapped with pit road speeding penalties.

Allgaier would recover to finish in sixth, with Briscoe in ninth. Cindric was mired back in 16th position at the end of the day.

Meanwhile, Allmendinger quickly pulled away on the final restart, while Gragson moved to second. At one point, Gragson closed to within a second of the leader, but in the end, Allmendinger stretched his advantage out to almost two seconds before the end.

Justin Haley, who was hit with two pit road penalties on the day, finished in third, with Daniel Hemric in fourth and Harrison Burton in fifth.

Allmendinger, Gragson, Haley and Hemric will try to score the big money is the next "Dash 4 Cash" $100,000 event, scheduled for Sunday, June 14 at Homestead-Miami Speedway.