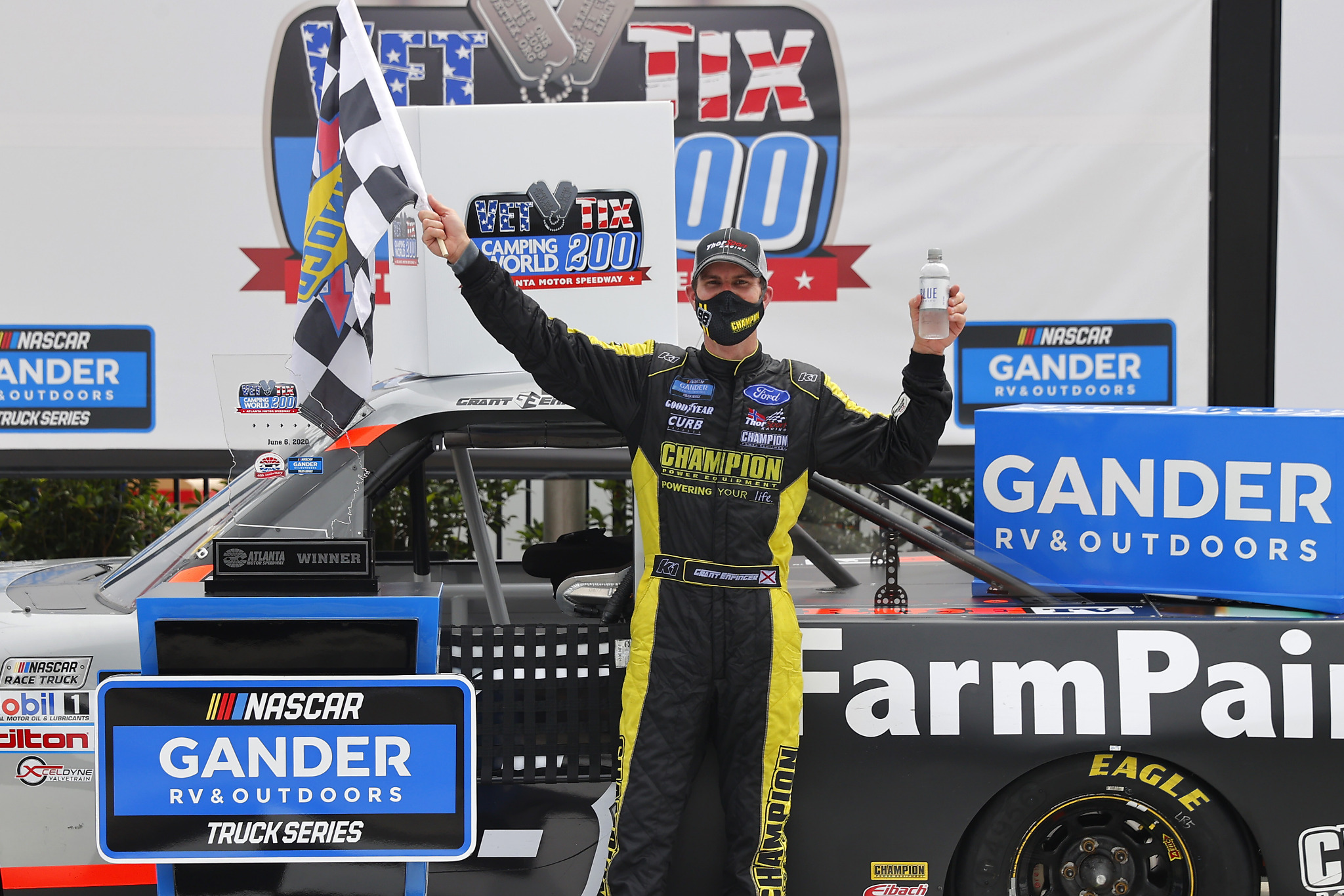 Enfinger went from sixth to the lead in just two short laps and collected his first Atlanta Motor Speedway victory and the first ever Atlanta truck series victory for Ford. Enfinger had also claimed the season-opening truck series race at Daytona back in February.

"It was definitely wild that's for sure,'' said Enfinger of the finish."We didn't lead too many laps, but we led the ones that counted.''

"We didn't have everything we needed to make a real run at those guys, Chase [Elliott] and Kyle [Busch] there for the long run, but I do think we were decent, but on the short run, I knew if it came right down to it and we could get a good restart we could make it happen. Fortunately we got a good restart.''

Hometown-favorite Austin Hill was cruising toward his first truck series win of the season after taking the lead on lap 100 and pulling away from the field when Chase Elliott spun with two laps to go to bring out the caution flag and set up a green-white-checkered finish.

Hill won the race off pit road under the ensuing caution, followed by Todd Gilliland and Christian Eckes with Enfinger restarting sixth.

On the restart, Enfinger powered up the middle to take over the second spot by around Eckes by the time the field came through turn one, then chased down Hill on the final lap with a high-side pass coming through turn two.

Hill tried to make up the distance over the final two turns, but ended up .215-seconds behind Enfinger at the line.

Despite the runner-up finish, Hill still leaves Atlanta as the points leader, 20 point ahead of rookie Zane Smith

"All day on the restarts, it took our truck about five to seven laps to get going," said Hill. "There at the end, on that white flag lap going into turn one beside the 98 (Grant Enfinger), I drove in there deeper than I had all day. It got on the splitter a little bit and when it did, I just got tight and had to lift a little bit. I'll take the blame on that one for not getting the win.

Kyle Busch was once again the truck to beat early in the race – winning the first and second stages while playing cat and mouse with Elliott and Eckes before the wheels came off with 33 laps to go.

Shortly after getting back up to speed following a green-flag pit stop, Kyle Busch smacked the wall trying to avoid the slowing truck of Jordan Anderson and was forced to pit to repair the damage.

To add insult to injury, Busch was nabbed for speeding on pit road – twice. Busch ended up three laps down at that point, but would rally to finish just one lap down in 22nd.

Busch’s sparring partner over the last two weeks, Georgia-native Chase Elliott, didn’t fare much better. Elliott missed pit road on the last round of green-flag stops and then brought out the yellow flag that set up the overtime finish, and ended the day a lap down on 21st.