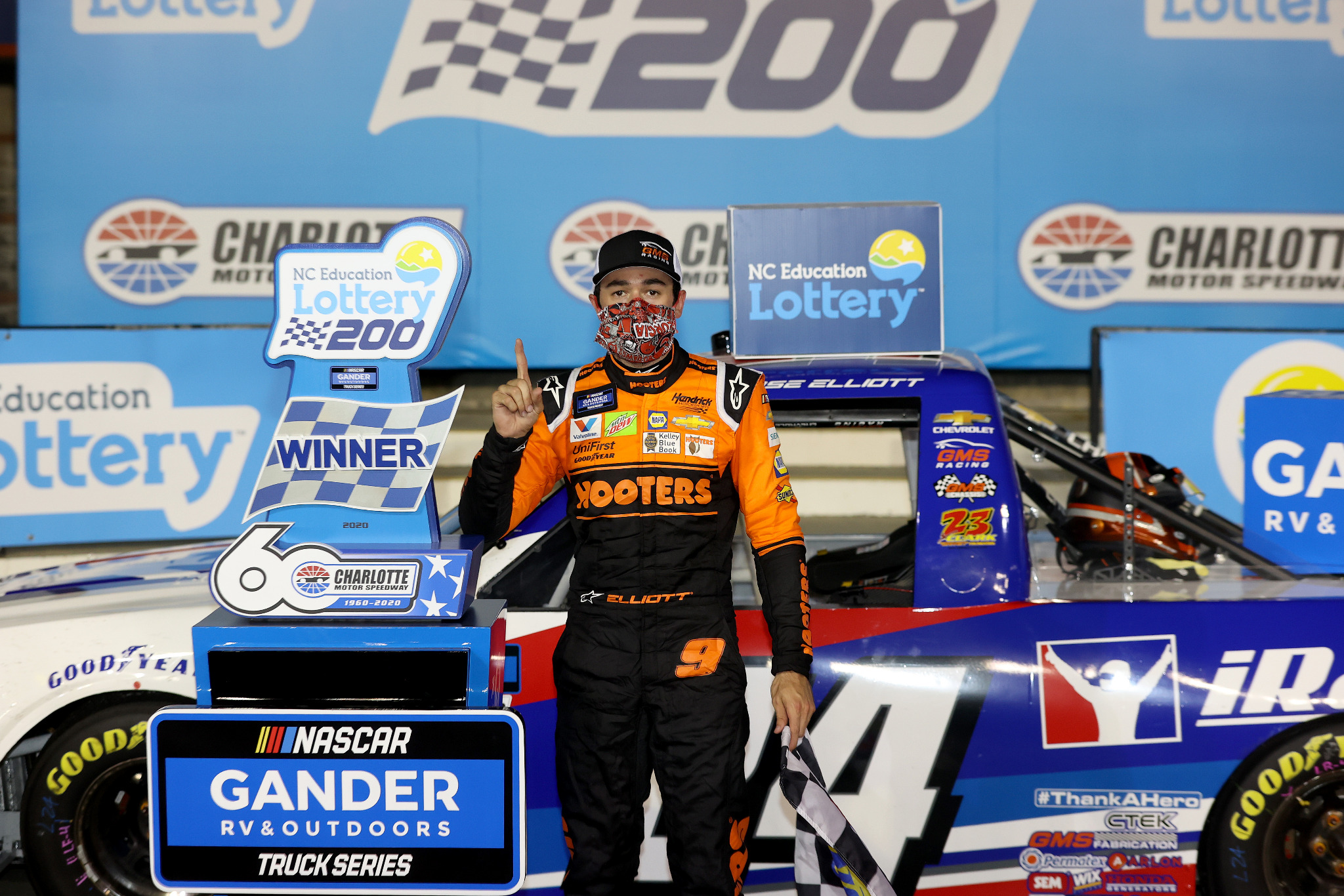 Elliott beat out one of the best in business Tuesday night after taking the checkered flag over Kyle Busch in the North Carolina Education Lottery 300 NASCAR Gander RV & Outdoors Truck Series race at Charlotte Motor Speedway.

Elliott led the final 24 laps and held off Busch more than half a second to notch his third-career truck series victory and collect not one, but two $50,000 bounties placed on Kyle Busch – earning Elliott a $100,000 bonus for charity to benefit COVID-19 relief.

"It was a lot a fun," Elliott said after the race. "To be able to come out and outrun (Busch), and him finish second—I'd much rather him finish second than wreck or something, so I feel like I did something right."

All in all, it was a night of redemption for Elliott, after blowing a sure victory on Sunday night's Coca Cola 600 and then getting spun into the wall last weekend at Darlington – a spin that was courtesy of Kyle Busch, giving Elliott all the more motivation on Tuesday.

Tuesday's race was the first on-track action for the Truck Series since the February 21th event at Las Vegas Motor Speedway, which was won by Busch.

After the Feb. 21st victory, fellow Cup Series driver Kevin Harvick offered up $50,000 of his own money to any Cup driver who could beat Busch in a truck series race. Later, CEO of Truck Series sponsor Camping World and Gander Outdoors Marcus Lemonis matched the reward.

Although the Truck Series went on hiatus along with the rest of the country due to the COVID-19 pandemic, Harvick tweeted on Tuesday morning that the Busch bounty was still on.

For Elliott, beating Kyle Busch was the reward. The bounty was just a bonus.

"It doesn't make up for Sunday (the Coca-Cola 600), but it was still a really good night. Glad to win and glad to do some good for the relief effort for this virus."

And after doing his celebratory burnout, Elliott took a moment to grab the checkered flag, and imitated Busch's trademark victory bow at the start-finish line.

"I thought we've had so much fun with this with Kevin (Harvick) and putting up the money and Kyle is a good sport about it, I hope," said Elliott. "It's not a dig at anybody, but just having fun with it. It was about beating him, and we did it, so why not have some fun with it."

After dropping as far back as 33rd during the first segment, Busch raced his way back up to the front and at the start of the third and final stage, Busch was out in front.

But then a caution flag on lap 88 changed everything.

While most of the lead-lap trucks elected to pit, Busch stayed out and held the lead when the field went back under green on lap 93. Just four laps later, Garrett Smithley brought the yellow back out and this time, Busch elected to pit for his last set of tires, putting him back in 23rd for the restart.

Following yet another caution four laps later, Busch has worked his way up to 12th while Elliott restarted third. Elliott quickly made his way past Johnny Sauter for the lead with 24 to go while Busch diced through the field to take second with 20 laps left.

From there, it was a two-truck duel as Busch tried to close up on Elliott, but never was able to get to Elliott's bumper and ended up second at the line – ending his truck series winning streak at seven races.

"Self-inflicted. Threw it away," Busch said of his team's performance on Tuesday night. "Had six months to prepare and screwed it all up.

"Our truck was just really bad and very poor handling. Should have been way better and way faster than it was to make up lost time, but also our pit strategy, we got off on that. We basically handed Chase (Elliott) I think 20 positions there on our final pit stop. That will seal in your own fate as well too. We were out in left field the whole night. Never really had a great feel for the truck or a great driving truck. Just salvaged what I could."

And Busch's reaction to Elliott's bow?

"Imitation is the strongest form of flattery or something, I don't know what it is. That's cute."