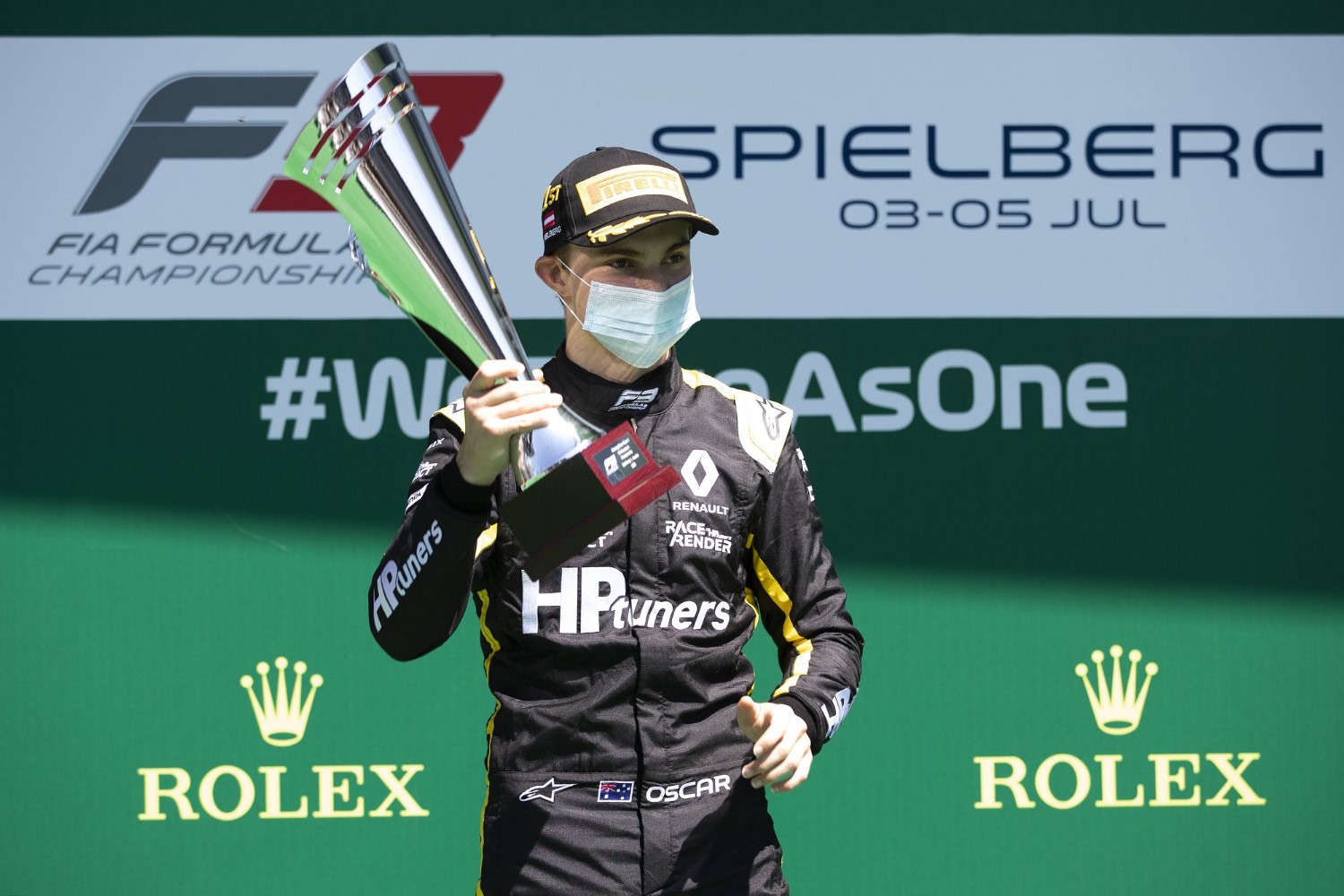 It was business as usual for PREMA, as the 2019 Champions got off to a near-perfect start in Spielberg, taking a one-two finish thanks to Oscar Piastri and Logan Sargeant. Piastri had stunned at the start to steal the lead from third, and played out a controlled race, rarely looking in danger.

Only the Campos of Alex Peroni could break up the PREMA party, with the Aussie racer snatching third ahead of Frederik Vesti, and the fastest lap, for his first ever F3 podium.

Having started the weekend so superbly, polesitter Sebastian Fernandez’s race was over before it even began, as a first lap collision with Piastri forced him to retire from the pits.

Clement Novalak will start Race 2 from pole, under the new reverse grid rules. The Frenchman impressed on his maiden appearance to finish 10th, with less than two seconds separating eighth from 11th.

Further back, Igor Fraga caught the eye on his F3 debut. The Brazilian dropped to the back of the grid at the start, but clawed his way up to 16th with a serious of stunning maneuvers.

As it happened Anyone expecting a calm start to the Formula 3 season would have been bitterly disappointed, with chaos ensuing right from the off. Sebastian Fernandez stuttered when the lights went out and allowed the Trident of Lirim Zendeli to edge ahead of him from the inside.

Piastri followed the German through down the right and it was that move that provoked a reaction from the Spaniard. Fernandez attempted to reclaim the position from the outside but ran out of room and went spinning into the gravel.

The ART machine was forced into the pits, where the polesitter’s morning ended in retirement.

Race control deemed it a racing incident, with no further action required. Piastri got away damage free, with plenty of momentum, and he followed up his move on Fernandez by diving past Zendeli on the outside of Turn 3 for P1.

Another beneficiary of the chaotic start was Peroni. Starting from eighth – on his return to F3 following a horror crash in Monza last year which ended his season early – the Aussie gained a

position as Hughes was forced to start from the pits, having qualified fifth. By the time Piastri took the lead, Peroni had flown to fourth and was hot on the heels of Sargeant in P3.

Despite the Campos in his rear-view mirror, the American’s focus was locked onto Zendeli in P2.

When the chance arose, Sargeant made sure he took it. Zendeli was overcautious on the brakes, which allowed both Sargeant and Peroni to dive around the outside of him.

Their battles in behind had allowed Piastri to build a firm 3s lead out in front, as Peroni got within DRS range of Sargeant. The American was just about managing to hold him off, while Piastri stretched his legs.

Further back, the fight for reverse pole was heating up. Under new rules for 2020, the top 10 will all earn points and then be reversed for Race 2. Clement Novalak was the incumbent of that position, but with less than 2s separating eighth from 11th, they continued to fight.

Another PREMA would join the top four, as Vesti darted ahead of Zendeli and set the fastest lap in doing so. The Dane’s move helped to ease the pressure on Sargeant, as he began to tussle with Peroni.

Despite the battles going on, little would change in the closing laps. Piastri fought off concerns about the degradation of his rear tires to close out a measured drive. The Aussie taking victory on his F3 debut, ahead of his teammate Sargeant, and Peroni.

Fellow debutant Vesti would seal a superb start to 2020 for PREMA with fourth, ahead of Zendeli, who also scored his highest ever finish in F3. Liam Lawson impressed with a drive from 12th to sixth, ahead of David Beckmann, Richard Verschoor, Smolyar and Novalak.

The key quote – Oscar Piastri (PREMA Racing)
“Winning the first race is a great start to the year. It was very scary at Turn 1 at the start and I thought that it was going to be race over 10 seconds into my debut, but thankfully I got through that and made a good move on Lirim [Zendeli] into Turn 3.

"Then, I just controlled it from there. The tire deg was a bit more than we were expecting and halfway into the race I was struggling a bit with the rears. Logan [Sargeant] was catching me and bringing the train with him, so I had to stay on my toes.

“I couldn’t have started the year any better really and hopefully we can make up a few spots in the reverse grid tomorrow."