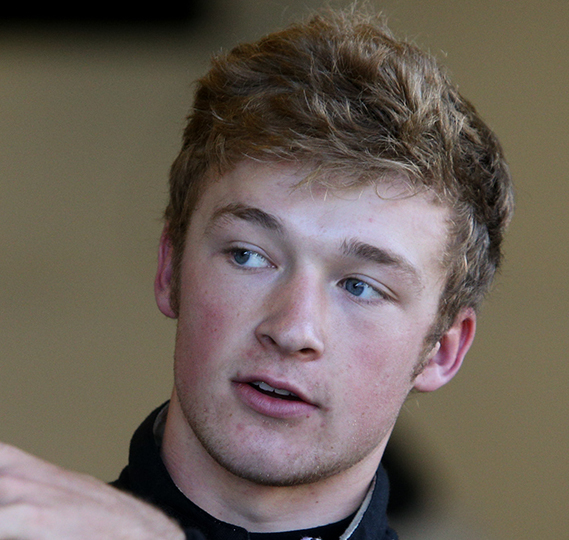 Like good friend Colton Herta, Chandler Horton grew up at Verizon IndyCar Series races. His father Jeff is the longtime INDYCAR Director of Engineering, and young Chandler played with many a race car in paddocks across the country. Starting out on dirt bikes then progressing from karts to formula cars, the 19-year-old now moves into the Mazda Road to Indy Presented by Cooper Tires, driving for RJB Motorsports in the Cooper Tires USF2000 Championship Powered by Mazda.

Here, Horton details his other racing passion (cycling), how he became the family appliance mechanic, and the time he spent actually living inside the Indianapolis Motor Speedway.

Tell us about your early years.

I was 4 or 5 years old when we moved from Michigan to Indiana, when my dad started working for INDYCAR. We didn't have a house right away, so we lived in a motor home at the Indianapolis Motor Speedway for the first five or six months. My mom made a sign for me for my first-day-of-school pictures and the Pagoda is in the background!

How did you get your start in racing?

I started out on a snowmobile in Michigan when I was 3, then moved to a dirt bike in Indianapolis when I was 5. I spent my summers with my dad at the IndyCar races, playing with my own cars – Colton Herta and I and a bunch of the other kids in the paddock would race our cars down the slide for hours on end.

When did you move from two wheels to four?

I've only ever known my dad to work in racing: I took my first steps at an IndyCar race. I always thought it was cool, but when I turned 13 my mindset kind of changed. I could only race when my dad wasn't at an IndyCar race since he took me, but it got to the point where it was difficult to get to the dirt bike races. So one afternoon, my dad sent me an email from Craigslist with a yard kart. That progressed to a racing kart, then to a Formula Ford, then Formula BMW – and things fell into place.

I really appreciated the opportunity to grow up on the other side of the fence, getting to see all the behind-the-scenes stuff. Auto racing is my life, but it's a balance between the chance that my background gives me and really taking the opportunity.

What got you interested in the Mazda Road to Indy and the USF2000 series?

I've always been a health and fitness geek, but when I started racing karts I started training at PitFit in Indy. I was only 14 but I was surrounded by guys like Josef Newgarden, James Hinchcliffe, Scott Dixon and Spencer Pigot. You see them and train with them and even though you're not at that level yet, you want to be like them. The Mazda Road to Indy is such a cool concept: I want to be an IndyCar driver so what better way to go about it? A family friend connected us with Fred Edwards from Metalloid, who works with RJB Motorsports, and it went from there.

What are your expectations for 2017?

The biggest thing I'm keeping in mind is something my engineer has always talked about, which is focusing on the process to get the result you want. Being a rookie driver with a second-year team, if we lose sight of the end goal we could end up shooting ourselves in the foot. We need to do our homework with a good mindset, and we'll be just fine. We put a lot of good things in place this off season but I don't have a numerical value on that. The team got their feet wet last season in an extremely competitive series so this year, we'll put all the pieces together. We have a new Tatuus USF-17 that we'll be testing soon.

What kind of activities do you do away from the race car?

I am majoring in business management and I race on the Marian University Cycling Team. There are several disciplines: you can either race mountain bikes or on the velodrome in the fall, cyclocross during the winter and road season in the spring. We also have a BMX team that competes year round. It's a great program because, though it's not NCAA, it's overseen by USA Cycling so we're treated like all the other athletes. It means that prioritizing and getting my schedule sorted out as soon as possible is really important!

During the school day I have class and homework, and since most of the racing is predetermined, we can work around it. I can change up my cycling plan based on the days I'm in the race car – luckily, Marian is a small enough school that the professors are willing to work with you. I just have to make sure I'm on the same page schedule-wise with the cycling coach. The two complement each other and I enjoy seeing the comparison between the two.

What is your favorite racetrack?

That's easy – the Indianapolis Motor Speedway! I raced on the road course in an SVRA event and I have to say I remember coming out of the last turn on the test day and seeing the yard of bricks and the Pagoda, and cued up my dad on the radio and was just yelling at how cool it was. It was so great to have that experience.

If I couldn't be a race car driver, I'd race motocross. But otherwise, I guess I'd own some businesses…

Do you have a “hidden" talent?

I'm not sure it's a hidden talent but I like working on mechanical things, like dirt bikes and the Formula Ford we still have at home. If the tractor breaks I work on that, and if the washer or dryer breaks, my dad sends me in to help with it. I work on my own mountain and road bikes as well. We also have a woodworking area at home.

What do you do to relax and get away from racing?

I like to fish – my friends and I go to a couple of ponds near home, or to Eagle Creek. All my family is in Michigan so we go back to visit them, but not during the summer. I can't think of one summer vacation we've ever taken!