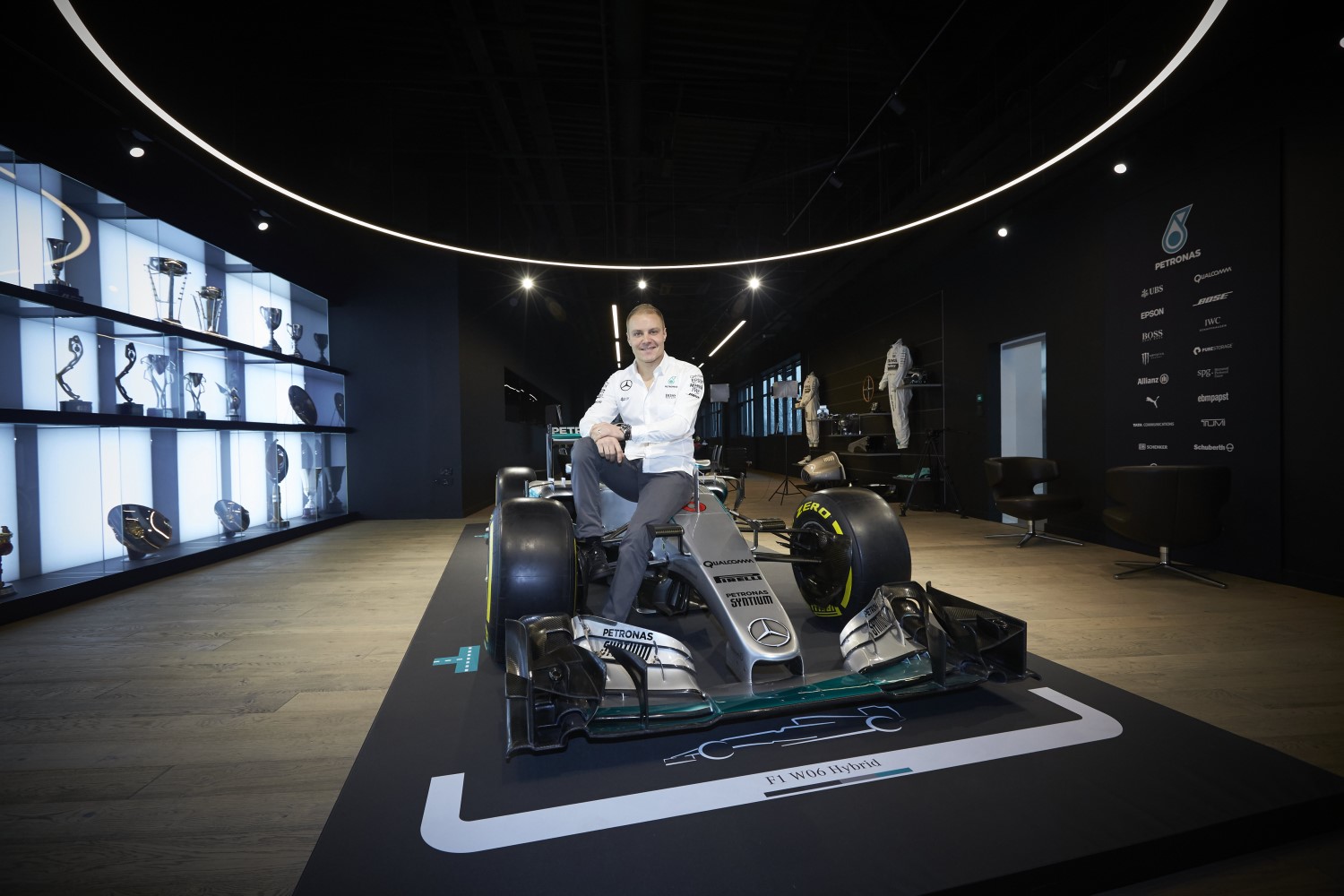 Last pieces of 2017 F1 puzzle in place
(GMM) The last major pieces of the 2017 grid have fallen into place.

"I must thank Williams for their cooperation in allowing Valtteri to make this move — and also Monisha (Kaltenborn) and Sauber for their patience during the past weeks," said Mercedes boss Toto Wolff.

It also emerges that Wolff has ended his management relationship with Bottas to avoid any conflict of interest, while world champion Rosberg will work as a Mercedes ambassador in 2017.

"We know that we are already behind the curve in terms of preparations for the new season, so we've got a busy program to get him integrated into the team," said Wolff, referring to Bottas.

For his part, 27-year-old Bottas said he is looking forward to being triple world champion Lewis Hamilton's teammate, and expects "no issues" between them.

"Being in this kind of team, you can't target anything else," said the Finn.

As for Massa, the Brazilian had actually retired at the end of last season, so he played down any suggestion his heart might not be in it in 2017.

"I would not have returned for any other team," said the 35-year-old.

Massa told Brazil's Globo: "I got a call from Claire Williams asking if I would stay at Williams.

"Since I said that I was leaving F1 only because I did not have a good team, and Claire's invitation was a change in that scenario, it was not difficult to come to terms."

'Angry' Sainz Jr. also 'patient' for future
(GMM) Carlos Sainz Jr. has admitted he is "angry" but also "patient", as his career stalls for now at Toro Rosso.

Actually, the Spaniard had a very good 2016 season, but it was his Toro Rosso teammate Max Verstappen who got the call to move into the senior team.

Not just that, Sainz got an offer to switch to the Renault works team for 2017, and was also linked with Nico Rosberg's Mercedes seat.

Red Bull would not let him go.

"Doing a year in formula one like the one I did is very difficult. That's why I'm angry that I am not moving forward.

"We had a very interesting offer from Renault that in the end was rejected by me as much as it was by Red Bull.

"That's life. If I had done that season in any other year I think I would have got a seat at Red Bull, but now the team is full, they are very happy with the two drivers they have.

"As I said, that's life, and sometimes formula one is difficult to understand. I just have to have patience and it will come," Sainz added.

One year deal for Bottas 'strange' – Salo
(GMM) Valtteri Bottas' one-year contract to drive for Mercedes in 2017 is "really strange".

That is the view of Mika Salo, a fellow Finn and former F1 driver.

Bottas' switch from Williams to replace the suddenly-retired reigning world champion Nico Rosberg at Mercedes was finally unveiled on Monday.

But sources quickly reported that the deal is actually for one year only, including a mere 'option' for 2018.

"I don't know what's behind it. One year contracts are quite rare nowadays. Perhaps Mercedes wants to check that Valtteri does the job as he should," he added.

One interpretation is that Mercedes wants to keep the door open for 2018, when talents like Sebastian Vettel and Fernando Alonso may be available.

"He has a winning car and the possibilities are endless," he said. "Everybody can see that Valtteri was the best choice for that job."

But when speaking with Ilta Sanomat newspaper, Salo said facing up against triple world champion Lewis Hamilton will be a tough task for Bottas.

"He has a car to fight for the world championship, but then he would have to beat Hamilton. It's really not easy," Salo insisted.

Vandoorne unsure McLaren can win in 2017
(GMM) Stoffel Vandoorne is not sure McLaren will be ready to win races in 2017.

After two seasons of struggle but steady improvement, the Honda-powered team has announced it will launch its new car on February 24 — the same day as Ferrari.

There is already speculation the car will be in McLaren's traditional orange.

Ron Dennis was always opposed to racing in McLaren orange in the new era, but the long-time McLaren supremo has been ousted and new executive Zak Brown has hinted at a livery change for 2017.

At a Richard Mille sponsor event, a McLaren was colored in a "one off" black and orange livery, and the same graphic theme was used for the announcement of the 2017 launch on Monday.

As for how competitive the car will be, Belgian rookie Vandoorne is not sure.

"It's hard to say," he told La Derniere Heure newspaper. "It's too early to judge.

"In any case, McLaren is improving. The last two seasons were not easy for Honda, but we made a significant step forward and we hope that positive trend will continue.

"I hope the car will be competitive and we will fight for the top positions," Vandoorne added.

Last year, Fernando Alonso finished tenth overall, so asked if that is good target for 2017, Vandoorne said: "No, finishing in the top ten is not the goal. I want to win.

"But we don't know if we can win races already. Probably this year it won't be the case, but I'm still going to try. McLaren has good prospects for the future and I'm in the right place. I believe in the team," he added.

Vandoorne has chosen 2 as his permanent F1 race number, so when asked why he made that decision he answered: "I used this number in 2010 in Formula 4, when I made my debut in open wheelers.

"It was a very successful year as I won the title. I hope 2 will bring me good luck again this year.

"I feel ready. I'm in excellent shape and the winter is already seeming too long. I would like the first race of the season to be tomorrow!" he said.

Wolff: Bottas a 'great fit' for Mercedes
Mercedes boss Toto Wolff has described Valtteri Bottas as a "great fit" for the team, after confirmation that he will replace Nico Rosberg and partner Lewis Hamilton in 2017.

Mercedes set its sights on Bottas following Rosberg's retirement and, following weeks of discussions with Williams, announced on Monday that it had secured the Finn's services.

"Nico's decision was a big surprise – certainly a challenging situation for the team to handle, but weathering the storm makes you more resilient and we see this as another opportunity for the team to grow.

"Valtteri is a no-nonsense guy: down to earth, straightforward and very focused. Pretty Finnish, to be honest, and a great fit for us.

"He has an impressive track record in the junior categories and nine podiums in Formula 1, but now it's time for the next level, to see how he can step up to challenge for race wins and for championships.

"We know that we are already behind the curve in terms of preparations for the new season, so we've got a busy program to get him integrated into the team.

"One thing is for sure: as I know Valtteri, he will give it everything."

Wolff also thanked Williams for agreeing to release Bottas, and Sauber for its patience, with junior driver Pascal Wehrlein's plans finally confirmed for 2017.

"On behalf of Mercedes, I must thank Williams for their cooperation in allowing Valtteri to make this move, and also Monisha [Kaltenborn] and Sauber for their patience during the past weeks," he added.

"It's been a busy day in the driver market and I am pleased to know that Pascal will be racing at Sauber to continue his development in Formula 1.

"He had a good first season with Manor and we feel this is the right path for him in the sport."

Felipe Massa has returned to Williams as Bottas' replacement.

Rosberg shocked the Formula 1 community when he announced his decision to leave the sport just days after clinching the title at the 2016 finale in Abu Dhabi.

Rosberg has not announced any motorsport-related plans moving forward, but Mercedes has revealed that he will act as an ambassador for the brand through 2017.

Lewis Hamilton will also appear at the event.

McLaren will present its latest Honda-powered car, set to be named the MP4-32, on the same day that rival Ferrari pulls the covers off its new design in Italy, shortly before testing begins.

McLaren, the fifth Formula 1 team to outline its 2017 launch plans, hinted at a potential livery change, with orange featured on the announcement image, which it posted via social media.

"Obviously [the reunion in] 2015 was a pretty painful year for the team.

Fernando Alonso is preparing to enter the third season of a three-year deal with McLaren, while Stoffel Vandoorne, who made his debut in Bahrain in 2016, replaces Jenson Button.

Vandoorne was called on to replace the injured Alonso and scored a point.