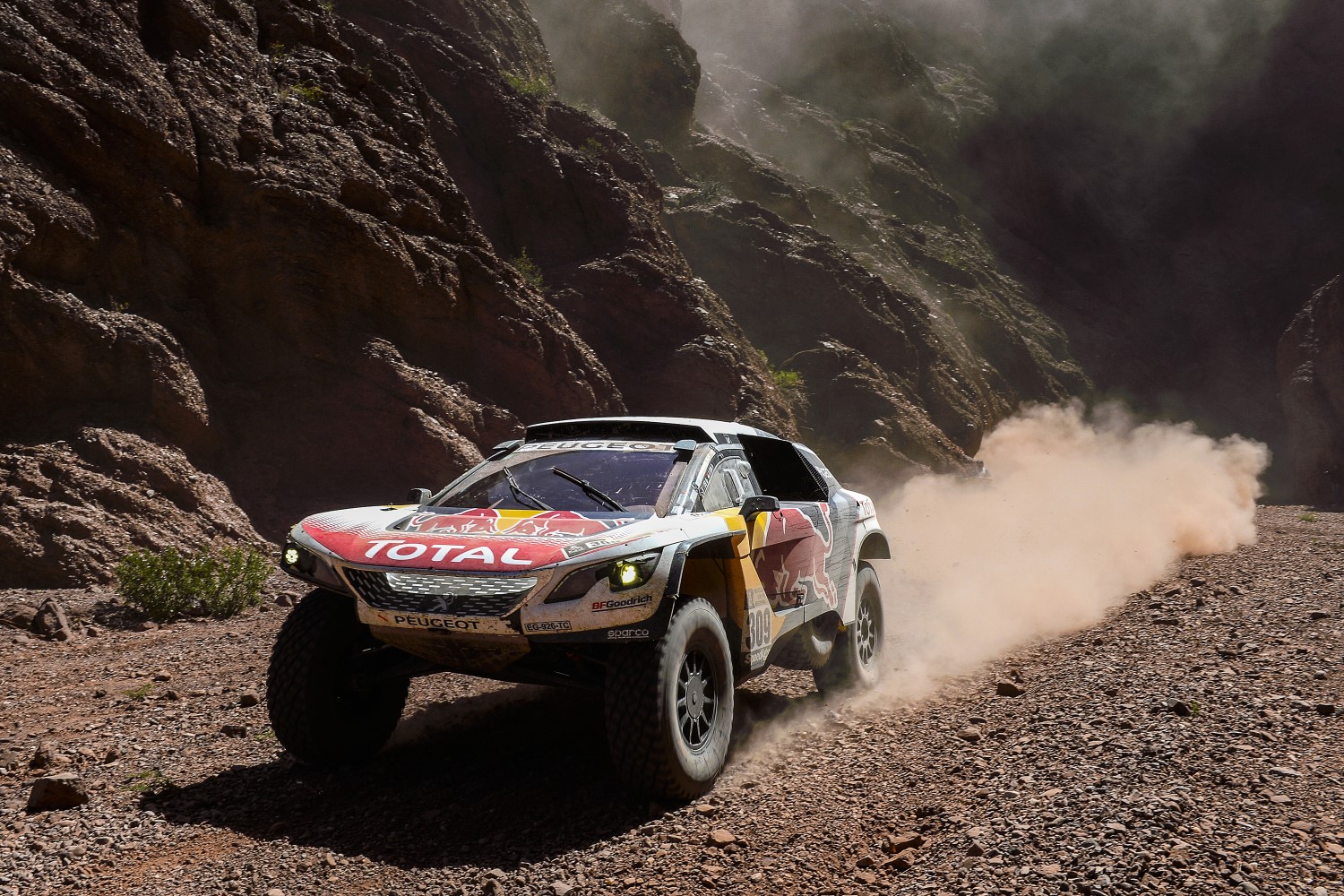 The brand new PEUGEOT 3008DKRs of Peterhansel/Cottret, Loeb/Elena and Despres/Castera completed the 2017 Dakar Rally's 9, 000-kilometre run through Paraguay, Bolivia and Argentina on the top three steps of the final podium in Buenos Aires, Argentina. Today's landmark one-two-three result takes PEUGEOT's score on the famous cross-country rally to six outright victories and is ideally timed to coincide with the launch of the new Peugeot 3008 SUV's career across the world.

Thirty years after its initial Dakar Rally success in 1987, Peugeot provided another demonstration of its know-how with an assertive one-two-three finish on this year's event in South America. Peterhansel/Cottret, the most successful crew in the event's history, flew the French tricolor high and proud as they steered their PEUGEOT 3008DKR over this year's challenging route which included high-altitude running, tougher navigation and appalling weather. The 2017 rally turned out to be a close, drama-packed affair with numerous leader changes and exceptionally small gaps at the order's sharp end from start to finish.

They say 13 is unlucky for some, but Stephane Peterhansel is unlikely to subscribe to that theory now that he has beaten his own record and taken his personal tally of Dakar Rally wins to 13 in total (six on two wheels, seven on four wheels). Stephane Peterhansel and Jean-Paul Cottret produced a near-perfect run this time round to clock up their seventh success together, allowing the latter to register a new record for co-driver victories.

Sebastien Loeb/Daniel Elena demonstrated impressive progress on only their second Dakar Rally outing. In addition to emerging as the fastest crew of the fortnight, they combined shrewd pace management with strong navigational skills. Their chances of victory took a blow on Day 4, however, when an engine issue cost them 26 minutes, proving cruelly decisive in the final reckoning. The Franco-Monegasque pair ended up second overall for the second year running and posted the highest number of fastest stage times (five from 10).

After coming seventh overall in 2016, Cyril Despres and David Castera shared the Dakar Rally's podium celebrations for the first time on four wheels after previously securing five and three bike victories respectively. The crew of the NÂ°307 PEUGEOT 3008DKR also recorded their first fastest time in the car category and even appeared at the top of the provisional leader board on the evening of Day 4 after one of the 2017 event's most selective stages, hinting that there's still plenty more to come from the French pair.

After providing further evidence of their speed, Sainz/Cruz were in the process of easing into the provisional lead when they were unfortunately eliminated. Damage sustained by the NÂ°304 car in a series of rolls on Stage 4 proved too much for the mechanics to repair within the authorized time and the Spaniards were forced to hand in their timecard at the bivouac in Tupiza.

The PEUGEOT 3008DKR successfully took over the baton from last year's winning car – the PEUGEOT 2008DKR – to make an immediate mark on the world's toughest cross-country rally. The two-wheel drive car warded of its all-wheel drive opposition to reveal the value of the technical configuration chosen by Team Peugeot Total. In spite of unfavorable changes to the regulations (bigger air restrictor), work on the car's engine and suspension in recent months paid big dividends. At the same time, the switch to a body shape derived from that of the Peugeot 3008 SUV permitted an aerodynamic package which favored high top speeds.

Team Peugeot Total's one-two-three finish on the 2017 event is the latest in a long list of Dakar Rally successes for the brand. It is PEUGEOT's sixth overall victory and its second podium lockout from seven participations.

"After such an emphatic win today, it's obviously been a positive event for us. We got three cars onto the podium and that's an accomplishment PEUGEOT and everyone at Peugeot Sport can be proud of. The 3008DKR won the Dakar at first attempt, so there's every reason to be pleased with the jobs performed by everyone in the team, from the mechanics to the crews. We functioned as a single unit and team spirit prevailed, not only on the rally but also during the design, preparation and servicing of the cars. The drivers and co-drivers never hesitated to help each other out, to an even greater extent than last year. Everybody feared this year's Dakar – justifiably in my opinion. This tension led the members of the team to work even more closely together and the reward is a fantastic overall team result. As far as the car is concerned, the biggest step forward was its reliability. We didn't have any mechanical issues, with the exception of a small problem which, it can be said, deprived Loeb an Elena of the win. All our work upstream of the event paid off in the form of enhanced performance. I know it can bring added stress but, for me, the thought of issuing team orders was inconceivable. As a result, everyone was able to savor the intensity of the fight to the end, including with the crews themselves!"

"This is a superb win for PEUGEOT and I was delighted to have such an exceptional car. I was also glad that Bruno Famin didn't issue any team orders. It was an open fight all the way to the finish. We faced stiff competition, not only from our own team-mates, with three other strong drivers in the squad, but also from the other teams. It didn't take long for an initial hierarchy to emerge, though, and soon there were just four, then two drivers challenging for the victory. My duel with Sebastien was intense and also quite stressful. At the same time, we had tremendous fun driving. It was never easy because Sebastien is a proven champion and extremely fast, and he has plenty of experience of managing from in front, so it was never straightforward for us, as can be seen by the small gap that separated us at the finish."

"It was a good event for us and, even though we ended up second, we were involved in the thick of the fight for first place from start to finish. After the small engine problem we suffered early on, we never stopped pushing. It was very exciting because we were flat out all the time, especially on the anti-penultimate and penultimate stages. It was a tremendous rally. It's a shame our scrap ended when I punctured yesterday. Overall, we had great fun and we ended up second on what turned out to be a highly complex event, while PEUGEOT ended up first, second and third. That's an extraordinary team result!"

"For us, finishing on the Dakar podium for the first time on four wheels feels like the start of a new chapter in our careers. Everyone in the team worked so hard all year-long and I am on the podium after only my third attempt at the Dakar in a car. That's due in part to the great car I had. It ran perfectly and the drivers who finished ahead of us were none other than Stephane Peterhansel and Sebastien Loeb, so there's nothing to be ashamed of there! I need to keep working to be even faster on all the different types of terrain if I want to climb one or two places on the podium. David and I intend to put in whatever work is necessary to achieve that!"

"I am delighted for PEUGEOT, and congratulations to Stephane and Jean-Paul on claiming another victory. On a personal level, I am obviously very disappointed to have retired. We had been running at a good pace from the start and the PEUGEOT 3008DKR marked a step forward compared with last year's car. I regret not having been able to make more of its potential."