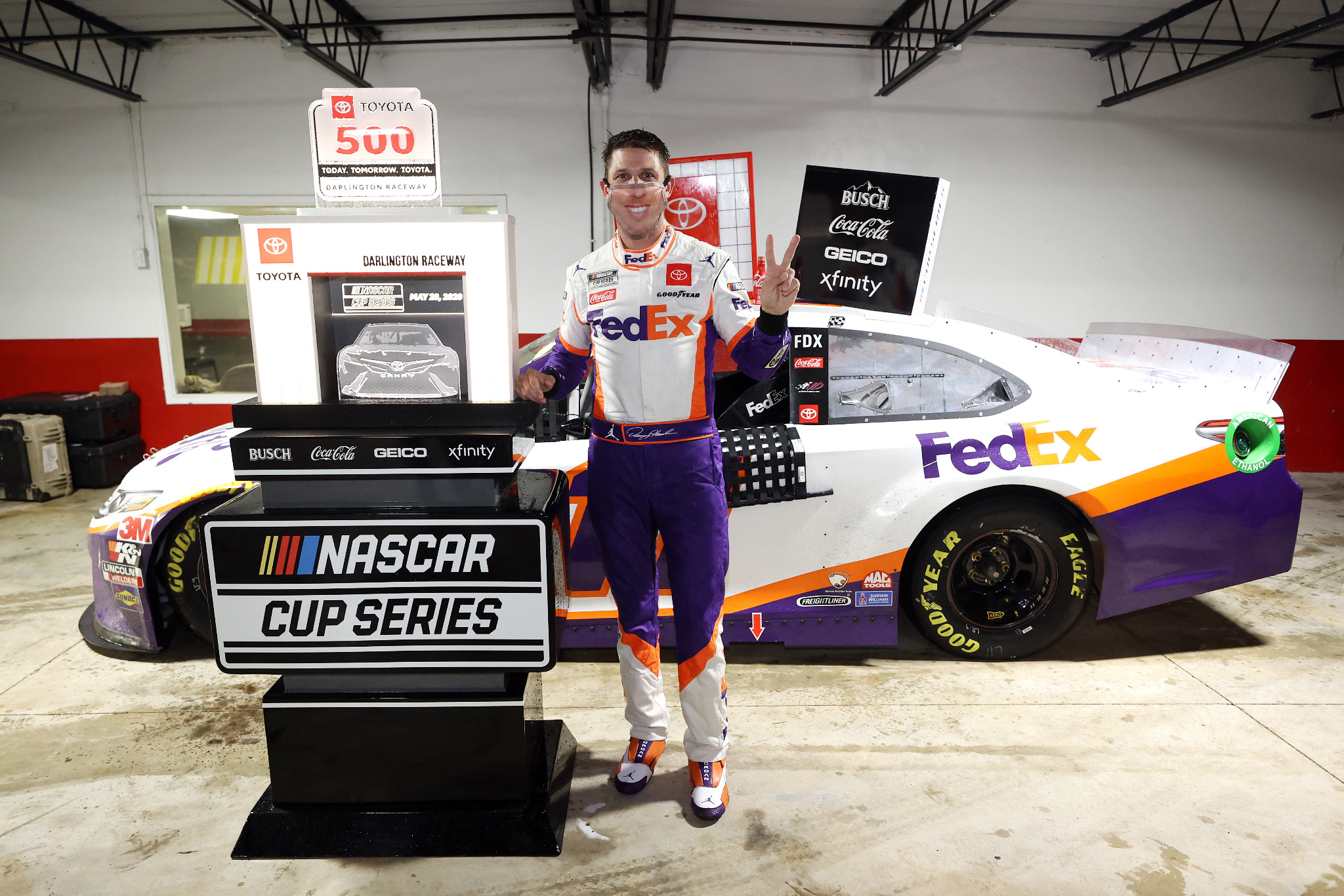 This year's Daytona 500 winner Hamlin took the lead during a late race caution – opting to stay on track while most of the other front-runners pitted for fresh tires. Hamlin held off the field on the ensuing restart with 29 laps remaining and was out front when the final yellow flag came out for an incident directly behind him involving reigning NASCAR Cup Series champion Kyle Busch and the sport's Most Popular Driver, Chase Elliott.

A steady rain began to fall before the race could resume and NASCAR parked the cars on pit road with 20 laps remaining before calling the race minutes later as the rain intensified.

"I've got my happy face on, made sure I brought it with me today," Hamlin said from inside his car on pit road, referring to a face mask depicting a huge smile. "The pit crew did a great job today, everybody really. I was pretty happy with how it all turned out.

[adinserter name="GOOGLE AD"]"It's a driver's race track," said the three-time Darlington winner." You can move around and you can do different things to make your car handle and we got it right today."

As a precaution to the global COVID-19 pandemic, no fans were in the grandstands. But for all those watching the race at home on FS1, it was an action-packed thriller and there was immediately a lot of talk on social media about the outcome and the closing laps.

As Hamlin took the victory questions on live television, Busch was approached by Elliott's crew chief Alan Gustafson to further discuss the incident with Elliott. Gustafson was Busch's former crew chief when the two-time Cup champion drove for Hendrick Motorsports from 2005-07.

"There's no question. I know I made a mistake and just misjudged the gap," Busch said of the incident with Elliott.

"We were racing there with the 11 (Hamlin) and the 9 (Elliott) had a run on him and I knew he was there and I knew I needed to get in line as quickly as I could and in doing so, I watched him and his momentum going by me and I tried to look up in the mirror and see where Harvick was (behind) and get in and I just misjudged it," said Busch. "I made a mistake and clipped the nine there and spun him in the wall. I hate it for him and his guys.

"I've got too many friends over there on that team to do anything like that on purpose. I've raced Chase since he was a kid and never had any issues with him whatsoever. It was just a mistake on my part and we'll just have to deal with it later on."

Certainly it seemed the Joe Gibbs Racing quartet had their best runs in the closing laps. With 70 to go, all four cars were inside the top 10 with 2019 Darlington winner Erik Jones leading the way.

Earlier, however, Clint Bowyer looked to be the man to beat for much of the night. He became the first driver of the season to win both the first and second Stages of the same race. And Bowyer's race best 71 laps out front was a personal best at the 1.366-mile speedway. He'd only led 17 laps total in 15 previous career starts at Darlington prior to tonight.

But with 34 laps remaining, Bowyer's No. 14 Stewart-Haas Racing Ford hit the wall and spun out bringing out a caution and sending the fan favorite to the pits for an extended stop. He finished a disappointing 22nd.

The race start was delayed about two hours as track workers dried the track from an earlier downpour and the green flag dropped for action at 8 p.m. The racing was immediately on tempo – fast and furious ultimately featuring 17 lead changes among 13 drivers with intense battles up front all evening.

The starting lineup featured an inverted field for the top 20 positions – based on the finish of Sunday's Darlington race. Harvick, who collected his 50th career NASCAR Cup Series win on Sunday, had to start 20th alongside his runner-up Alex Bowman. The disadvantage did not last long, however, as both Harvick and Bowman made their way forward despite each brushing the famously notorious Darlington walls.

Harvick's runner-up showing – his sixth top-10 finish in as many races this season – was enough to keep him atop the NASCAR Cup Series driver standings by two points over Logano. Bowman is third in the championship – 37 points back from Harvick.

For the first time this season, Christopher Bell earned top rookie honors scoring an 11th-place finish in the No. 95 Leavine Family Racing Toyota. His previous best finish on the season was 21st in the season-opening Daytona 500.

Are you happy to have won tonight's Toyota 500 at Darlington?

"I've got my happy face on and made sure I brought it with me today. Just can't thank FedEx and Toyota and Coca-Cola, Jordan Brand – the whole JGR engine and fab shop. The pit crew did a great job today. Everybody really. I was pretty happy with how it all turned out."

What does it mean to win at Darlington again?

"This is a driver's race track. You can move around, you can do different things to make your car handle. We got it right today."

What was going through your mind on old tires coming to the final restart?

"The weather really didn't play a factor in our call there. It was really, we were limited on tires. We had just come to take tires, which was our last set, but we had a set of one-lap scuffs. They weren't glued up in time. We didn't have time to glue them. The only choice for us was to stay out. We were really the best car on that long run anyway. I think the right car won."

Did you feel the field was more intense with a shorter race and a threat of weather?

What is it about Darlington that suits your driving style?

"I run good here. Sometimes I run a different line here than most. It just works and it's always worked. I don't know what it is. It's awesome to win here with the Toyota 500. Ever since I came here for my very first Xfinity start and got a top-10, that essentially got my job in the Xfinity Series, there's something about me and this track that works."

What took place between yourself and Chase Elliott?

“There’s no question I know, I made a mistake and just misjudged the gap. When we were racing there with the 11 (Denny Hamlin) and the 9 (Chase Elliott) had a run on him. I knew he was there and I knew I needed to get in line as quick as I could and in doing so, I watched him and his momentum as he was going by me. I tried to look up in my mirror and see where (Kevin) Harvick was to get in and I just misjudged and made a mistake and clipped the 9 there and spun him into the wall. I hate it for him and his guys. I have too many friends over there on that team to do anything like that on purpose. I’ve raced Chase since he was a kid and never had any issues with him whatsoever. It was just a bad mistake on my part and I’ll just have to deal with it later on."

How did you leave it after crew chief Alan Gustafson spoke with you post-race?

“They’re mad, I’m not just going to fix it and we’re going to go have ice cream tomorrow. Obviously, they’re going to have to dwell on it and the repercussions of it for sure I’m going to have later on, down the road."

(I) NOT ELIGIBLE FOR POINTS

(*) REQUIRED TO QUALIFY ON TIME