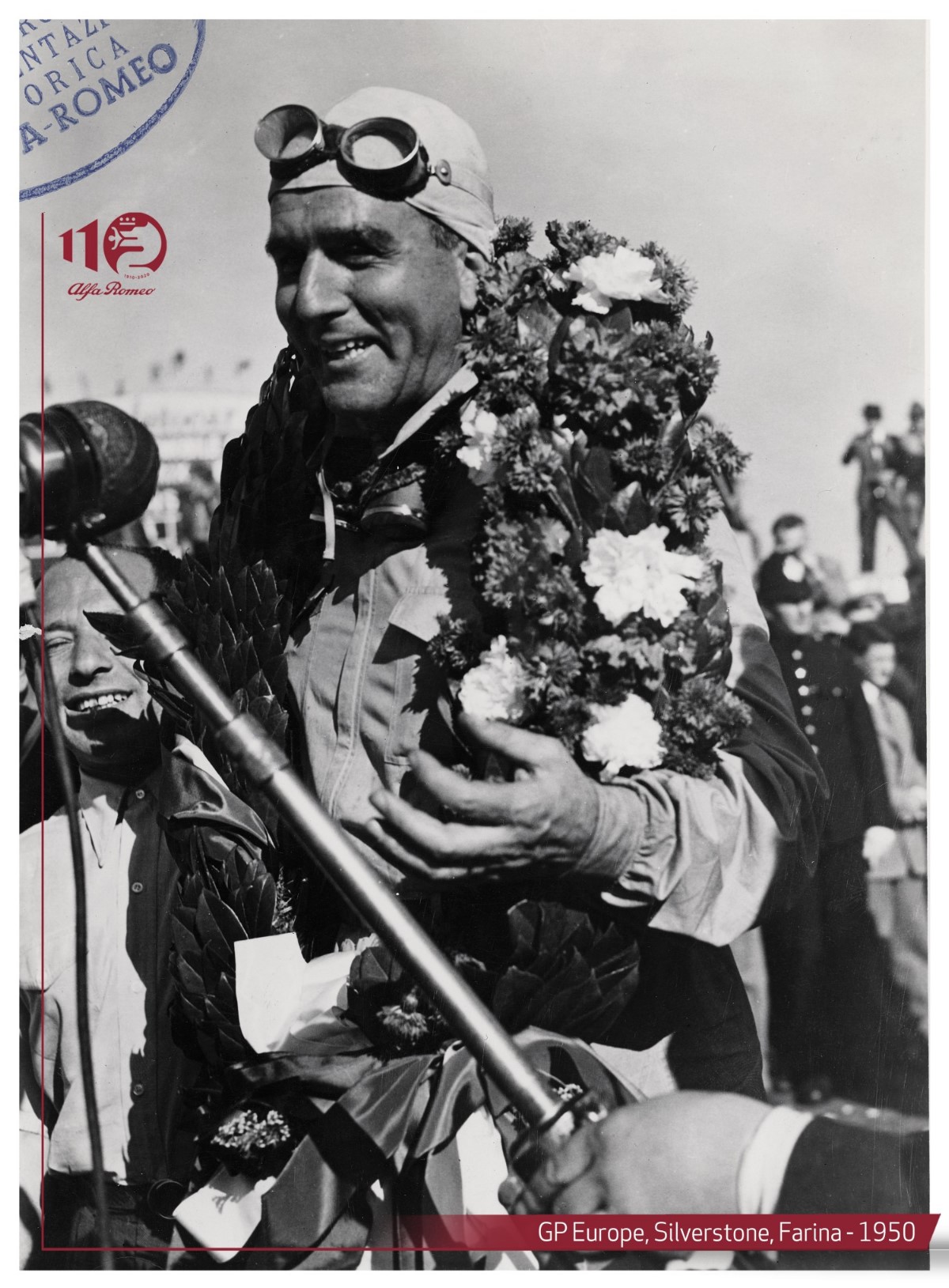 May 13 marks the anniversary of the very first Formula 1 Grand Prix race ever, launching one of the great sporting myths of our time. The launch of this event, in 1950 at Silverstone, was celebrated by the International Federation in Shanghai on 14 July 2019 to mark the 1,000th race and now, on 13 May 2020, on the occasion of Formula 1’s 70th birthday.

Two very different eras face to face. In 1950 crash helmets were still optional, there was no television, and the spectators were entirely distributed on foot alongside the racing track. Today the Formula 1 “circus" is a global industry, transmitted to reach 400 million TV and web viewers every season.

Only two things are common to both eras: the passion of the public and Alfa Romeo, which returned to Formula 1 in 2018 together with the Sauber team and, as of 2020, will compete under the name Alfa Romeo Racing ORLEN.

The 1938 Alfetta was a technological jewel. The 8-cylinder straight-line engine with a single-stage compressor and a triple-body carburettor was developed by Gioacchino Colombo, head of the design department, who was determined to make it powerful, ready for instant acceleration and absolutely reliable. The distribution was driven by a double overhead camshaft. The use of light alloys (elektron for the monobloc, nickel-chromium steel for the crankshaft) enabled engine weight to be reduced to as low as 165kg. The gearbox was mounted in the rear, in a block with the differential. This was the famous "transaxle" scheme, taking up less space and providing an optimal distribution of weight between the two axles: a solution that the brand will later use also in its road car series.

The Second World War then ruptured the research thread, and brought the evolution of Alfa Romeo cars to a shuddering halt: but the technical solutions envisaged by the project were sophisticated enough to be still valid in the post-war period and, in some cases, to the present day.

The links between pre- and post-war Alfa 158 models were not just a matter of similar design, there was also a physical continuity. The post-war models were literally the same as the pre-war ones, which had been hidden to await the end of the war.

In 1943 Milan was occupied, round-ups and arrests increased day by day. A small number of Alfetta 158s remained in storage inside the Portello factory, at risk of being carried away as spoils of war. Various Alfa Romeo technicians and labourers decided that they must be removed. They began clandestine planning to carry them away in trucks. Various passionate Alfa admirers volunteered to hide one, including the speedboat champion Achille Castoldi who had set a world speed record in 1940 using an Alfa Romeo 158 engine.

But a problem arose. Just as the convoy of trucks was about to depart, a Wehrmacht patrol appeared with their weapons at the ready. Fortunately, the Alfa test driver Pietro Bonini was Swiss and had lived in Berlin for some years. Speaking confidently in perfect German and waving a safe-conduct authorisation he assured the commander and saved the day. The trucks departed. The 158 models were then taken to garages and farm sheds, to be hidden behind false walls or heaps of logs to wait for better times.

The launch of F1

Not long after the end of the war, those same Alfetta 158 models were brought back to Portello and carefully restored and prepared to return to racing. And racing meant winning, even though circuits and championships were in a fragmented and provisional condition. Between 1947 and 1948, Nino Farina came first in the Gran Prix of the Nations in Geneva, Varzi was first in the Valentino Grand Prix in Turin, and Tossi tore the competition to shreds to triumph in the Gran Premio of Milan. The message was loud and clear: Alfa Romeo was still the car to beat.

The British Grand Prix at Silverstone in 1950 was the first of the eight races that constituted the first FIA Formula 1 World Championship. Countries that had been at war with one another, only a few years earlier, were united in a single sporting event. It was a historic moment and it turned out to be a historic triumph for Alfa Romeo.

The 158 combined outstanding speed, handling and reliability which made it the ultimate achievement of motorcar technology of that moment. At its first launch in 1938, it had a 1.5-litre engine with a 185hp compressor. For its second launch, after the war, the compressor became dual-stage and the engine reached 275hp and by 1950 it had reached 350hp at 8,600rpm. Thanks to its extreme lightness, it’s weight/power ratio was only 2kg/hp, a value in line with today's super sports cars.

Technical superiority brings victories. For the press, Farina, Fangio and Fagioli became the “the 3Fs team", an unbeatable trio which demolished all rivals. The three Alfa Romeo aces won all the Grand Prix races they took part in, ending on the podium twelve times and achieving five fastest laps. As Giuseppe Busso, Alfa Romeo designer and collaborator of Gioachino Colombo, put it later “our main problem was deciding which of the three drivers should win any given race".

On 3 September 1950, for the Monza Grand Prix, Alfa Romeo tried out the technical resources of the Alfetta 159, actually developed for use in the following year’s Championship. The new Alfetta made its debut with a victory. At the wheel was Nino Farina, who became the first ever Formula 1 World Champion.

The following year, the championship was resolved only in the last race, at the end of a long duel between Alfa Romeo and Ferrari. After 17 years, the phenomenal Alfetta engine was reaching the end of its potential for further development, but during the 1951 races the technicians managed yet again to wring out the last drops of extra power and reach the milestone of 450hp. Thanks to this final effort, and to its extraordinarily talented drivers, the 159 triumphed in the GPs of Switzerland, Belgium, France and Spain, with eleven podium finishes and the fastest lap in all seven of the races.

The “3 Fs" and their victories became legendary, and ended up carrying Alfa Romeo to the silver screen. The two most powerful Italian producers of the time, Dino De Laurentis and Carlo Ponti, chose Amedeo Nazzari and a stunning Alida Valli, the biggest stars of the moment, for the leading roles in “Ultimo Incontro" (“Last Meeting"), a film set on Formula 1 racetracks and in the offices of the Alfa Romeo Racing Team. The writer Alberto Moravia collaborated on the script.

The film was released on 24 October, 1951 and four days later Juan Manuel Fangio, driving the legendary Alfetta 159, won the Spanish Grand Prix and became World Champion. The second consecutive victory. Alfa Romeo had won the first two Formula 1 World Championships in history, at which point it could retire from Formula 1 unbeaten and devote itself instead to producing beautiful road and sports cars.