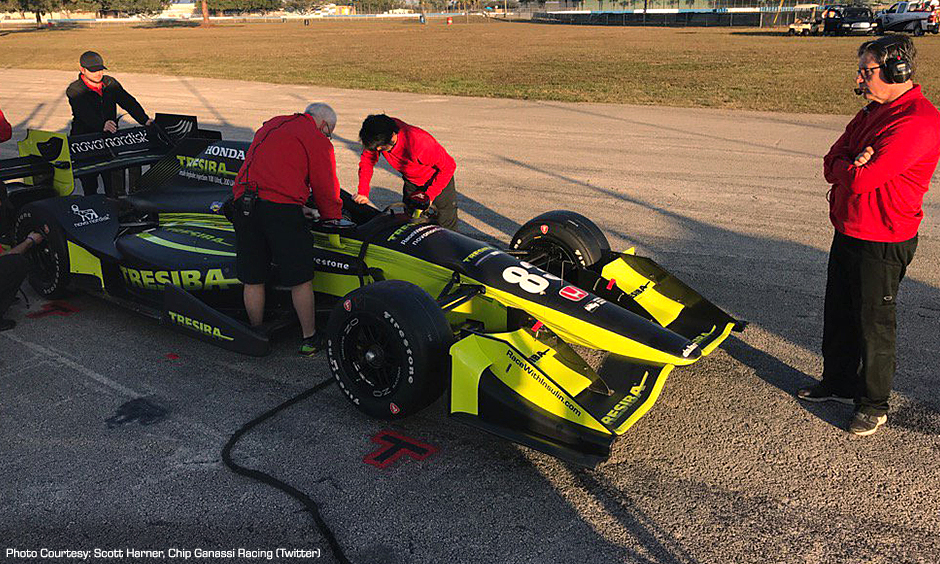 Chip Ganassi Racing was the first Verizon IndyCar Series team to hit the track in 2017, with all four of its drivers testing Thursday at Sebring International Raceway in central Florida writes Bruce Martin of IndyCar.com.

The team was scheduled to test at Sebring on Dec. 9 but didn’t turn a wheel due to rain and wet track conditions. Mike Hull, the team’s managing director, called Thursday’s makeup test a very productive day and important since CGR is returning to Honda this season after three seasons with Chevrolet.

“We ran all four cars today, all day until dark," Hull said. “Each car had a pretty large list individually. There were some common items on the list but a lot of individual items. Being a team with four cars and having a new product to test with this being our first test day with all four cars, we got a lot accomplished today. We learned an awful lot. We explored the opportunity we had to get it done today without any issues.

“We probably added 20 percent to our test list by having three weeks to talk about it," Hull said. “The car that we are racing today is totally new for us. Yes, it's the same DW-12, but the weight distribution (between the Chevrolet and Honda engines and aero kits) is different, so the way the mechanical aspect of the car acts, you have almost to take the notebook you have and throw it away mechanically with the suspension part of the car. The aero is certainly new for us, so we have to match the aero to that."

The Honda car also runs at a different ride height than the Chevrolet.

“We had to relearn a lot of things that we probably had tossed out," Hull admitted. “The damper program that we had, we needed a complete rethink. The engineers that work together had to come together on what we should be trying opposed to what has worked for us the last three years.

“You have to have this open-minded aspect of what you will do when you change products and that is what we have done."

One benefit of the canceled December test is it allowed the team to conduct its annual post-season meeting where the drivers and engineers went through everything that happened during the entire 2016 season.

“We got a lot out of December even though we didn't run on the racetrack," Hull said. “It helped us understand where we need to go as a team."

Hull expects Honda to have a fantastic season in 2017.

“I think it's a great lineup and Honda has some really strong teams," Hull said. “We are the new guys on the block here and hopefully we can work together with all of the Honda teams to where we all run respectively on the racetrack."