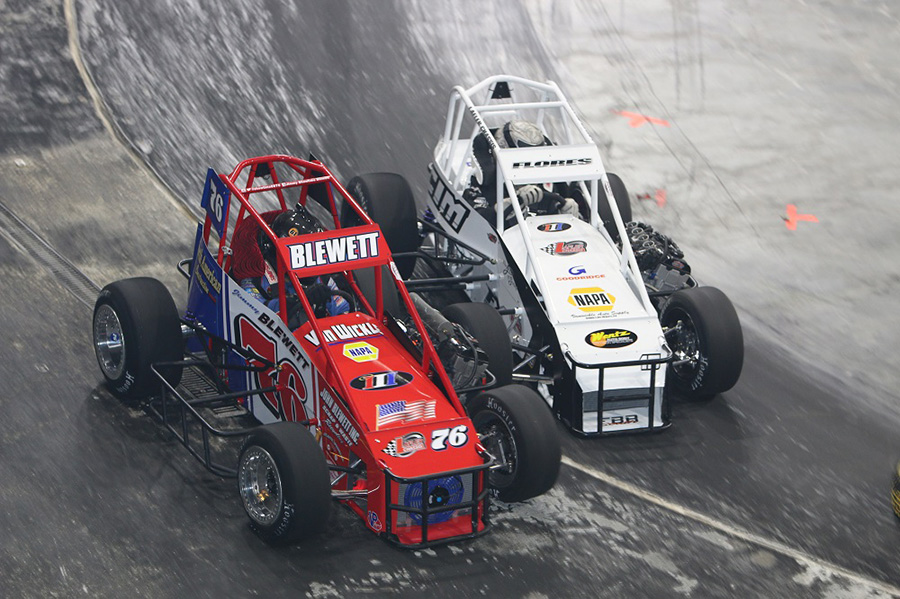 UPDATE Flores is a New Jersey native who works full time in the fabrication shop for Penske Racing's NASCAR outfit near Charlotte, North Carolina. On weekends, he's a tire changer for the Wood Brothers and driver Ryan Blaney, who are associated with Penske Racing.

"I got together with Erick (Rudolph) in the middle of the race on a restart and all of the sudden he (Tommy Catalano) is there making it three wide and taking the lead," Flores said.

"He was good, but I could see he was running at his limit. Next thing, he spun and I was able to pass him."

That was just the beginning of a series of improbable events that Flores was able to conquer to win for the second straight night. At various times over the final ten laps of a caution-plagued race, Rudolph, Jonathan Reid, Anthony Sesely, Justin Bonsignore, and Catalano, for a second time, lined up alongside or behind Flores.

Catalano impressed by finishing second after spinning while leading.

"Couldn't be happier," smiled Catalano. "I went to the rear of the field, what, three, four times? I didn't even qualify for the Friday feature. We changed everything on the car for tonight, swinging for the fences, and almost won it."

Blewett, third at race's end, was the emotional opposite of Catalano. "It was a frustrating weekend all the way around," Blewett said. "This was a rough night."

Blewett actually failed to qualify for the TQ feature but was added to back of the 25-car field as the high point driver who had not qualified. He also drove a backup car, one that had been on display in the PPL Center's Mezzanine, starting last, finishing third, and earning the Schneider Scrap Metal Hard Charger Award.

Flores had come into the PPL Center weekend having never won a LSMP Indoor feature. He now has two straight victories to add to his prior five second place efforts.

The win was Daley's eighth career win in LSMP-promoted events and was the first Champ Kart race inside PPL Center.

Six TQ Midget ten lap heat races and three 12-lap B mains preceded the feature action to winnow the 52-car field down to the 24 feature starters.