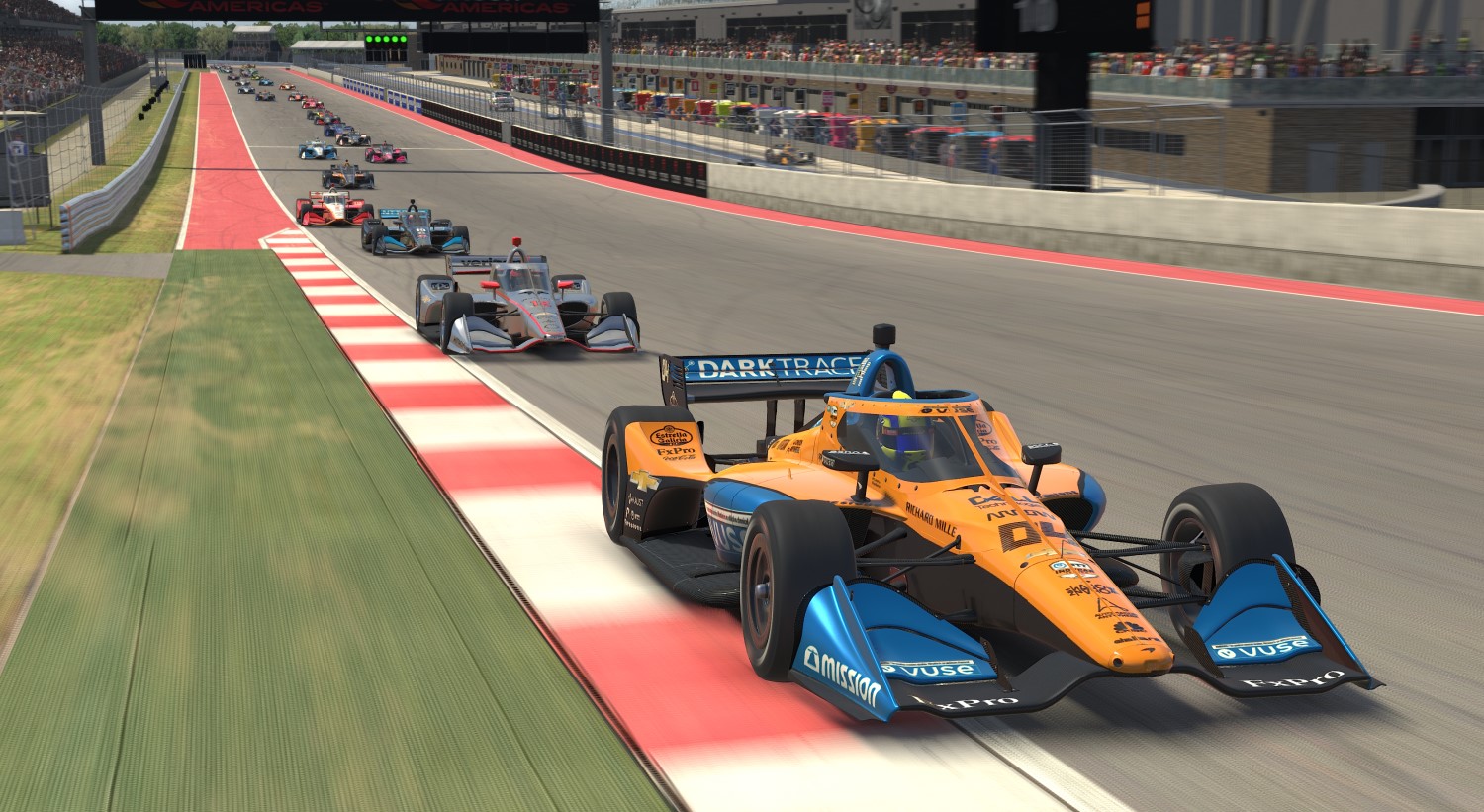 British McLaren F1 driver, in his very first IndyCar iRace, took the pole by 4/10ths of a second, and in the race took the IndyCar drivers to school in Saturday's IndyCar race at the Circuit of the Americas.

Felix Rosenqvist spun out trying to hold off the faster Norris and ended up third. Penske Chevy driver Scott McLaughlin was 4th while Dale Coyne's Santino Ferrucci rounded out the top-5.

Norris overcame a spin after his first of two pit stops to scythe through the field and take the lead for good on Lap 29 of the 32-lap race when leader Felix Rosenqvist spun.

[adinserter name="GOOGLE AD"]"It was not easy at all, which was all down to myself and obviously the spin in the second stint," Norris said. "It was a tough race, especially with Pato closing down with the new tires at the end. I didn't think I was going to get back to the lead, so I was kind of gutted. I got the good, old call from my engineer on the team radio to tell me to keep pushing, and I did."

2019 NTT INDYCAR SERIES Rookie of the Year Rosenqvist recovered from his spin to finish third in the No. 10 NTT DATA Chip Ganassi Racing Honda. Two-time reigning Virgin Australia Supercars champion Scott McLaughlin was fourth in the No. 2 Shell V-Power Team Penske Dallara. 2019 Indianapolis 500 presented by Gainbridge Rookie of the Year Santino Ferrucci rounded out the top five in the No. 18 SealMaster Honda.

[adinserter name="GOOGLE AD"]Norris won the pole by nearly four-tenths of a second over fellow front-row starter Will Power and quickly pulled away from the 33-car field during the opening laps on the 20-turn, 3.41 road circuit. Norris led Power by 2.5 seconds after just six laps, cementing his status as the driver to beat.

Experienced sim racer Norris decided to make his first pit stop on Lap 11, one lap before a competition caution. He was the only driver in the lead group to stop before the planned bunching of the field.

Many other drivers decided to pit during the competition caution, opting for a two-stop strategy like Norris. But 2014 NTT INDYCAR SERIES champion Power, Rosenqvist, rookie Rinus VeeKay, Ferrucci and five-time NTT INDYCAR SERIES champion Scott Dixon all stayed out past the competition caution, deciding to stretch fuel and tires and pick a one-stop strategy.

Norris was sixth on the restart on Lap 15, the leader among the drivers on two-stop strategies. He passed Dixon for fifth in Turn 1 and then dove under Ferrucci on the same lap.

Then self-induced trouble arrived at the end of that lap, nearly ruining Norris' race. He spun exiting the final turn, Turn 20, on the restart lap and fell to 13th place.

Meanwhile, 2018 Indianapolis 500 winner Power pitted from the lead at the end of Lap 17 but spun twice on his out lap after the stop in the No. 12 Verizon Team Penske Chevrolet, hopping the tall curbs in the esses section toward the start of the circuit.

"I don't know what happened to Will, but that was the key, basically, Will spinning, to allow me to get back to P1," Norris said.

O'Ward took the lead on Lap 18, ahead of Ferrucci and NTT INDYCAR SERIES rookie Alex Palou in the No. 55 Dale Coyne Racing with Team Goh Honda. Deeper in the field, Norris was charged through slower traffic, compensating for his spin.

"I was swearing quite a bit, but I won't repeat that right now," the colorful Norris said about his reaction to his spin. "I was really annoyed. We'd been strong as a team, and to throw it away as stupidly as I did, just by trying to be a bit eager on the gas coming out of the last corner, I was just annoyed."

Norris channeled that anger into speed. By Lap 19, he cut his deficit to the front from 15 to six seconds. He drove to third place at the start of Lap 21 and jumped to second on that lap after diving under McLaughlin in Turn 12, at the end of the back straightaway.

By Lap 24, Norris pulled to within seven-tenths of a second of leader O'Ward. Norris then dove into the pits for his second and final stop, with O'Ward, Palou and Rosenqvist comprising the top three when Norris pitted.

O'Ward and Palou both needed to make second and final pit stops, so the race for the lead on the road came down to Rosenqvist – on a one-stop strategy – and Norris, who had much fresher tires and more speed after his final stop.

The fascinating showdown for the win between Rosenqvist and Norris was set up when O'Ward pitted from the lead on Lap 27 and Palou followed into the pits from the top spot on Lap 28. Rosenqvist inherited the top spot on worn tires and a light fuel tank.

But the anticipated duel never materialized due to Rosenqvist spinning from the lead on Lap 29 in the esses between Turns 2 and 3 after touching one of the high curbs. Norris squirted past Rosenqvist to take the lead for good, barely avoiding a collision.

O'Ward passed Rosenqvist for second at the end of the back straightaway on the same lap and set sail for leader Norris. O'Ward had two advantages over Norris – fresher tires due to a later stop and four 10-second push-to-pass horsepower boosts remaining, compared to just one for Norris.

But Norris delivered in the clutch, turning the quickest lap of the race on the final circuit to hold off O'Ward and ensure victory in his debut in the six-round virtual racing series, which features NTT INDYCAR SERIES drivers and special guests.

"I'm proud that we ended 1-2. I was pushing hard to get him (Norris) in the end but couldn't quite get to him."

Just one race remains in the INDYCAR iRacing Challenge, Saturday, May 2 at the Indianapolis Motor Speedway. A field of 33 drivers will race 70 laps (175 miles) on the famous 2.5-mile oval at IMS, home of the Indianapolis 500 presented by Gainbridge.

Full-time NTT INDYCAR SERIES teams will be guaranteed entries, along with any Indy 500 winner who has participated in the INDYCAR iRacing Challenge and any race winner in this series. The remaining spots in the field will be filled during a qualifying event Wednesday, April 29.

While this event is the final race in the INDYCAR iRacing Challenge, it will kick off a variety of virtual activities to connect fans to their beloved Month of May at IMS. The two traditional racing pillars of the month have been rescheduled due to the COVID-19 pandemic, with the GMR Grand Prix scheduled for Saturday, July 4 on the IMS road course and the 104th Indianapolis 500 presented by Gainbridge set for Sunday, Aug. 23.

Watch The Full Beat Down