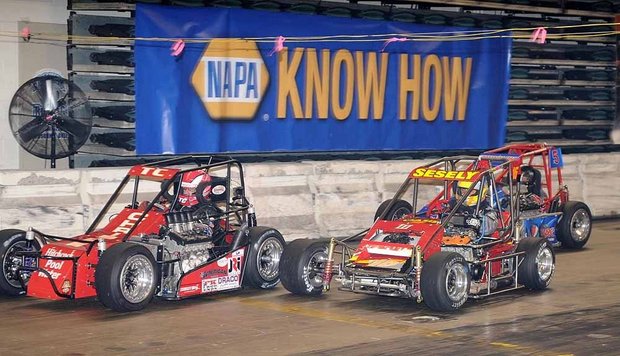 UPDATE In addition to over 100 Three Quarter (TQ) Midget, Champ Kart and Slingshot racers, and thousands of spectators, sponsors will play a big part in the second annual Indoor Auto Racing fueled by VP events to be held inside Allentown's PPL Center on Friday and Saturday, December 30th and 31st.

VP Racing Fuels is the title sponsor of the entire Indoor Auto Racing Series which started a week ago in Trenton, NJ and ends inside Atlantic City's Boardwalk Hall on Friday and Saturday, January 27th and 28th. Steve Post, a veteran NASCAR pit reporter for the Motor Racing Network will join the announcing staff of the Indoor Auto Racing Series for events in Allentown, Pa. and Atlantic City, N.J.

Post will join the 'Voice of the Three Quarter (TQ) Midgets', Bob Marlow, and Pocono Raceway's chief announcer Earl Krause on the series starting with the Allentown event held inside the PPL Center on December 30 and 31. Post will also play a major role on the team at the Gambler's Classic inside Atlantic City's Boardwalk Hall on January 27 and 28. More info at indoordautoracing.com.

If Rudolph should sweep the Allentown weekend, he would end the season second in northeast feature wins with 26 victories! It would also put him three-quarters of the way towards a $10,000 bonus offered by Bob Hilbert Sportswear of Boyertown, Pa. To pocket the challenge money, Rudolph would only then have to win the Indoor Series finale inside Atlantic City's Boardwalk Hall on Saturday, January 28th to pick-up the ten grand! Rudolph’s victory earlier this month in the series opener on December 10 at Sun National Bank Center in Trenton, N.J., was the seventh of his Indoor TQ Midget driving career. Christopher has previously amassed eight, the most recent of which was two years ago, also inside the Trenton arena.

“The car was just about perfect," Rudolph said after his Trenton victory. “It had to be because the competition has never been better. It’s the same car we won with here in Trenton in February and in Allentown back in January." For the 2016/2017 Indoor season, Christopher has parked his own No. 13 in favor of driving the No. 49 owned by upstate New York whiz Trey Hoddick. Christopher moved into second to Rudolph in the feature in his debut for Hoddick. But after setting the fastest lap of the feature, an oil line detached from the engine erupting it in a fireball.

“I was gaining him," Christopher said. “I was running just as quick or quicker than he was until the car blew up." Aside from Christopher, a former NASCAR Modified champion, there are at least five strong competitors who are in line to win for the first time over the Ironton Telephone/ Avaya Indoor TQâ€ˆMidget race weekend in Allentown. It's only a matter of time before Ryan Flores, Jimmy Blewett, Zane Zeiner or Justin Bonsignore pull into victory lane.

“I just need to work on making the car a little better," a disconsolate Flores, a full-time employee of Penske Racing's NASCAR Cup Series team.

Blewett, Howell, N.J., was third in Trenton and set the second fastest time in qualifying. He's been a factor in every Indoor race he has run.

Two Lehigh Valley, Pennsylvania entries, Zane Zeiner of Bath, Pa., and Earl Paules of Palmerton, Pa., also have the experience, equipment, and talent to challenge Rudolph. Zeiner finished third at Trenton and was competitive in the battle up front. Paules couldn't overcome several hurdles at Trenton, but the 2015 Mahoning Valley Speedway asphalt Modified champion is out to redeem himself in front of his hometown area fans.

Justin Bonsignore of Holtsville, NY missed the Trenton event to attend the NASCAR Whelen Modified Tour banquet in Charlotte, NC to collect his second place in the standings awards. Proven to be fast last year Indoor in his No. 51, Bonsignore is expected to be another pre-race favorite to win for the first time indoors.

On Friday, the TQ racing will be supported by a card of Slingshot action; on Saturday, Champ Karts are the undercard.

Allentown tickets are available online at www.PPLCenter.com and or at the PPL Center box office located at 701 Hamilton Street, Allentown, PA 18101.

The finale for the 2016-2017 Indoor Auto Racing Championship Series fueled by VP is set for Boardwalk Hall in Atlantic City, N.J., on Friday and Saturday, January 27-28, 2017, featuring the fifteenth running of the NAPA Auto Parts Classic.

Anthony Sesely of Matawan, NJ, who has won four times in Atlantic City, is seeking his first Indoor win away from the ocean resort with a new car. Sesely, one of five drivers on the Lou Cicconi team, will be driving a Lafler built car for him for the first time in Allentown.

Event information, including ticket sales and hotel room deals are available at www.indoorautoracing.com or by phoning 609-888-3618.