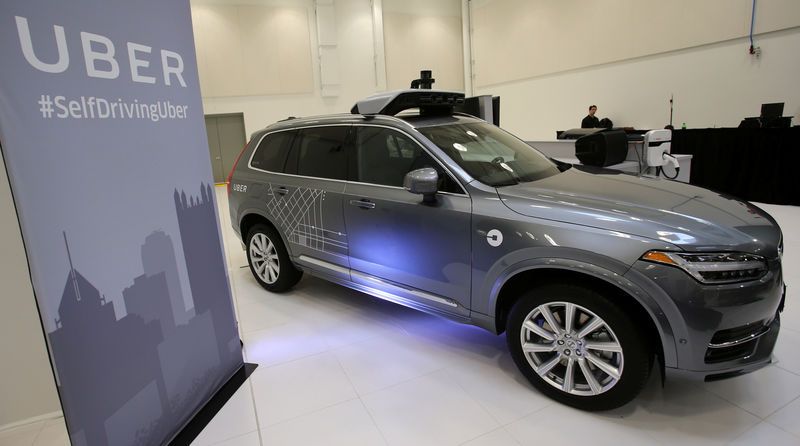 UPDATE Uber's puzzling defiance of a California requirement that it get a $150 permit to operate self-driving cars in San Francisco came to an end with the ride-hailing company announcing it was suspending the program. Uber had little choice: California's Department of Motor Vehicles revoked registrations for its 16-vehicle test fleet earlier in the day.

"We're now looking at where we can redeploy these cars, but remain 100 percent committed to California and will be redoubling our efforts to develop workable statewide rules," the company said in a statement.

Uber's stance began with the start of the test program on Dec. 14, acknowledging from the get-go that it had decided not to seek Autonomous Vehicle Testing permits, despite the fact that they aren't particularly difficult to get. Currently, 20 companies testing a total of 130 autonomous vehicles in California have already received them, as have several individual test drivers, according to the DMV.

Aside from paying a $150 fee, applicants agree to provide accident data and disengagement reports – how frequently a human driver takes control from the automated system. Conceivably, Uber doesn't want to provide that information for the public to see.

Anthony Levandowski, head of Uber's self-driving vehicle team, told reporters last week that such a permit wasn't needed for the Volvo XC90 SUVs in the San Francisco test fleet since each vehicle had two technicians in the front seats at all times. The company began a similar public test program in Pittsburgh in September, the headquarters for its driverless car research efforts.

The state DMV strongly disagreed and the California Attorney General's office demanded that Uber comply or halt the program.

"Consistent with the department's position that Uber's vehicles are autonomous vehicles, the DMV has taken action to revoke the registration of 16 vehicles owned by Uber," the agency said in a statement. "It was determined that the registrations were improperly issued for these vehicles because they were not properly marked as test vehicles."

The DMV "invited" Uber to apply for permits to put them back into service, something the company is now interested in doing, according to DMV Director Jean Shiomoto.

"The autonomous vehicle testing application process is simple and straightforward," Shiomoto said. "I have a dedicated team to work with you to expedite the approval process." More from Alan Ohnsman/forbes.com

12/18/16 Uber's standoff with California regulators continues as it refuses to stop its self-driving pilot program in San Francisco.

The California Department of Motor Vehicles on Wednesday called on Uber to either apply for a permit with the agency to legally test self-driving vehicles on public roads in the state, or cease the practice in order to avoid legal action. This was the same day both the ride hailing service and its automaker partner, Volvo, announced the expansion of the pilot program that began earlier this year in Pittsburgh, Pennsylvania.

In a conference call Friday, Anthony Levandowski, Vice President of Uber's Advanced Technologies Group, reaffirmed the company's position that it does not need a permit to operate its fleet of Volvo XC90s in California, trying to differentiate between their "self-driving" cars and the law for "autonomous" cars.

It's hard to understand why the DMV would seek to require self-driving Ubers to get permits when it accepts that Tesla’s autopilot technology does not need them. We asked for clarification as to specifically what is different about our tech from the DMV, but have not received it.

Levandowski said the XC90s they're using are not capable of operating without human input, unlike the vehicles Uber believes the DMV's rules say need to be covered under the permit, comparing it not only to the Tesla system, but pretty much any other vehicle on sale today with a collision avoidance function.

"The distinction between our self-driving Ubers and the autonomous vehicles described by California State law is not a legal nicety. Nor are we seeking to exploit some loophole in the law," Levandowski said. "It’s an important issue of principle about when companies can operate self-driving cars on the roads and the uneven application of statewide rules across very similar types of technology."

The Uber-California argument here seems more like a splitting of words, however, when you consider the permit costs $150, according to The Verge. The company's case for its human input certainly wasn't helped with the video of one of the Volvos running a red light hours after the program began in San Francisco.

What happens next? Watch this space. carscoops.com