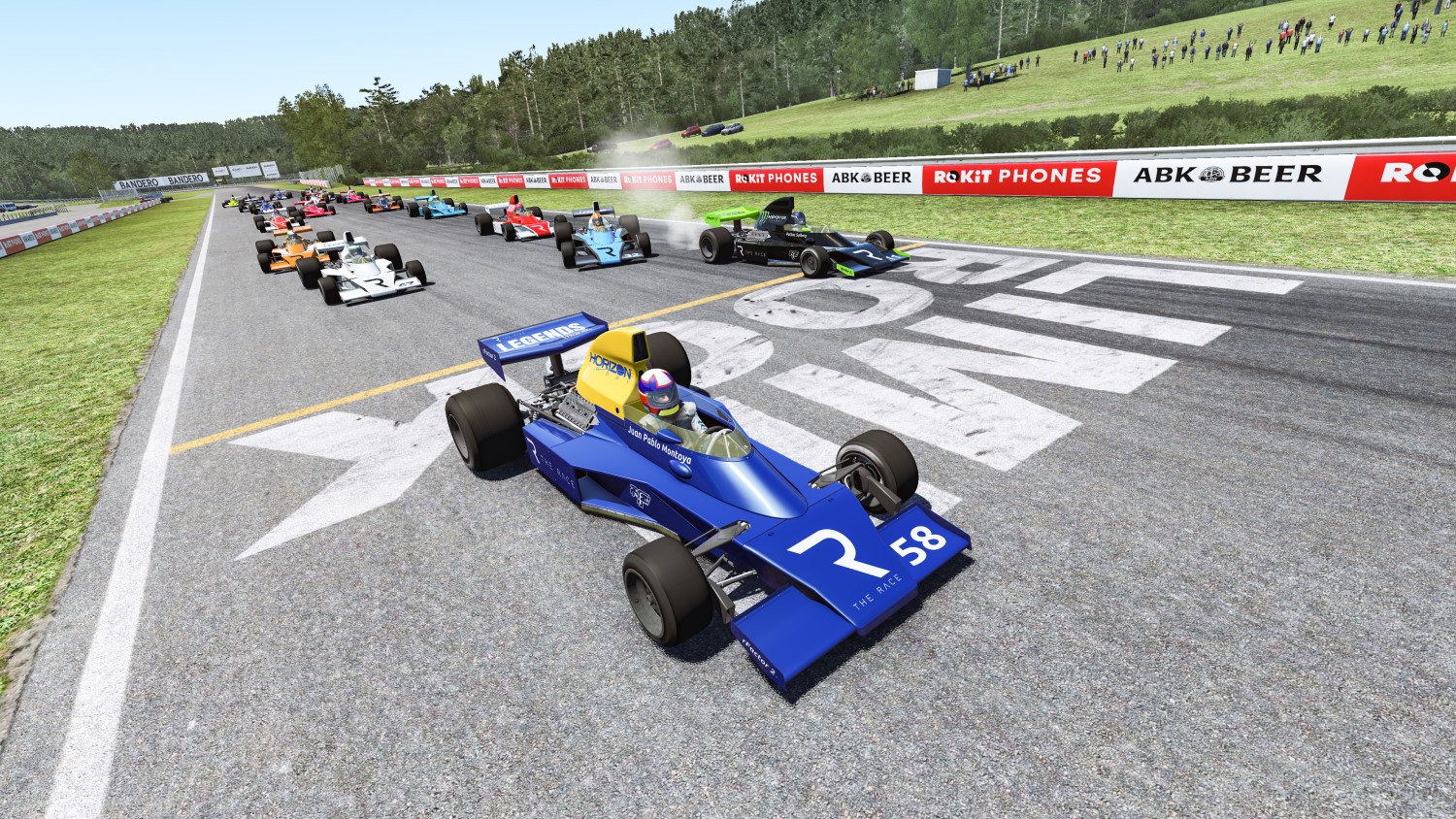 After taking the win last week on the virtual rFactor 2 version of Sebring International Raceway, the 2009 Formula 1 World Champion Button again took pole at Lime Rock Park but was beaten to the first corner by the hard-charging Magnussen.

“That was a fantastic race! Jenson was being very sportsmanlike about it because he had more speed than me," said Magnussen, whose son Kevin competes for the Haas F1 team.

“He had a couple of attempts into turn one, and we hit and got sideways – but he did it in such a way that none of us went off. That was a tough race, I'm shaking all over after that – it was amazing."

Although they were located 5,580m (8,981km) from each other throughout the 11-lap battle, the Dane and the LA-based Englishman were separated on-track by mere inches, with Magnussen eventually crossing the line just three-hundredths of a second ahead of Button, and notching up a second victory after taking his first Legends Trophy win at NOLA Motorsports Park two weeks ago.

“What a fun race. Jan was awesome in terms of knowing where to put the car," Button said.

“I threw it on the inside once and we tapped and we were drifting through (turn) two – it was a lot of fun. It's a little bit more difficult to feel in the simulators, so for us to be able to race that close it was awesome."

This is not the first time Button and a Magnussen fought on track both aboard a McLaren – Button was actually teammates with Kevin Magnussen at McLaren in F1 2014.

Twenty-three racing legends lined up on the grid as they raced virtual versions of the World Championship-winning McLaren M23. This week’s Legends Trophy field combined for four Formula 1 World Championships, 1,026 starts, 47 wins, and 40 poles; 11 Indy 500 wins; 10 IndyCar titles, 2,353 starts, 175 wins, and 175 poles; plus 16 victories in the 24 Hours of Le Mans and a World Rally Championship crown.

“I got a 10-second penalty so I didn't qualify too well. And then I got tangled, and tangled, and tangled in the first race," Montoya said. “It was nice to win the reverse grid race after that. These guys put on a hell of a show. It was great to complete a race without any major incidents.

“It's a lot of fun, but it's frustrating as hell because each of us are way too competitive. We all get moody. You should see my wife, she is not happy with me when I do not do well."

The ground-breaking, Torque Esports-created event again expanded its global television reach for the second consecutive week. After launching a partnership with ESPN in the United States last week to showcase the entire three-hour All-Stars broadcast, Torque expanded its global reach with the weekly 90-minute highlight show now seen on more than 70 international networks reaching in excess of 610 million homes.

In addition, The Race All-Star Series – Fully Charged by ROKiT Phones is also live streamed on The Race’s YouTube channel; on Twitch via Torque’s gaming and tournament brand UMG Gaming; across Europe on Eurosport’s YouTube, Facebook and Twitter platforms plus throughout Germany on Sky Deutschland’s online platforms.

The All-Star portion of the competition was won by former World’s Fastest Gamer finalist Erhan Jajovski for the second week in a row. Top international racing stars from Formula 1, Formula E, sports cars and other major series do battle with leading sim racers in the competition.

For the 22-lap final, Jajovski charged into the lead in the first corner and was never challenged en route to the win and a 14-point lead in the championship. The Macedonian is chasing a full day’s test onboard a Formula 1 simulator as his prize for championship success in the three-race series.

Three drivers – IndyCar’s Gabby Chaves, Epps and Guenther are tied as the top-scoring pro driver. The winner after next week will earn $30,000 for the charity of his choice from Torque Esports.

“Interest in our championship continues to grow with an ever-expanding TV audience. The battle in our first Legends Trophy race today between Magnussen and Button was just incredible. The beauty of sim racing is we are able to bring together more than 80 drivers from all over the world each week and have the race together to put on an incredible show.

“We’re thrilled with the result. We’re so happy we can put on a show for the fans and introduce sim racing to a massive global audience that is growing every week."