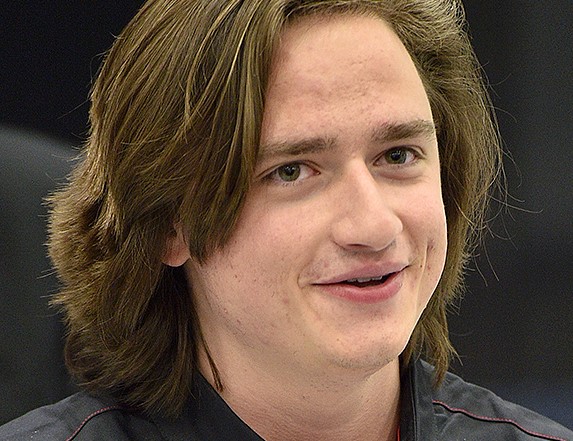 They've come together with the same burning ambition to one day be an integral part of a Verizon IndyCar Series team and race in the Indianapolis 500.

For George Steinbrenner IV, 20, that meant deviating from the famous family legacy of baseball. His late grandfather of the same name bought the New York Yankees in 1973 and his father, Hank, is part owner of the iconic franchise.

For Colton Herta, 16, he's continuing a family legacy as a race driver. His father, Bryan, had a lengthy career driving Indy cars and is a two-time Indianapolis 500 winner as a team owner.

What makes the bond of two aspiring, young men even stronger is the mutual desire to forge their own path. They took their first step together with Thursday's announcement that Steinbrenner and Michael Andretti will own a team with Colton Herta driving in the 2017 Indy Lights presented by Cooper Tires series.

"People always ask, ‘What is it like?'" Steinbrenner (pictured above) said of growing up in a Yankees family. "It's my life. I knew no different. I love baseball. But I want to do something else."

Herta has always wanted to race since his dad bought him his first go-kart at the age of 5. "He never started me," Colton said of his father. "I've always wanted to do it. Ever since I was little, it was steering wheel, gas pedal, go."

It's an important distinction that both reiterate. They have the support of their families without any pressure to race.

Bryan wants to be more of a father than a manager as his son climbs the open-wheel racing ladder. He's willing to offer advice when needed, but prefers to experience his son's progression on a more personal level. After a successful 2 1/2 years of European racing, Colton will drive the No. 98 Andretti Steinbrenner Mazda as the second-youngest driver in the history of Indy Lights, the top tier of the INDYCAR-sanctioned Mazda Road to Indy presented by Cooper Tires and just a step below the Verizon IndyCar Series.

"I've always wanted to run INDYCAR, it was just a matter of how to get there and what was the right process, which for sure this is the right way to do it," Colton said.

When not going to Yankees games, Steinbrenner grew up a race fan, just like his father and grandfather.

"My dad really did love car racing," Hank said in a Thursday conference call. "I always did, even when I was a little kid. My son has been around it for a long time through different connections. Hopefully now it will become a much greater involvement and for a lot longer period of time."

George IV, of Tampa, Fla., hasn't lived his life in the spotlight like other family members. A Wednesday interview was his first since high school. After years of growing interest, George worked last year on Bryan Herta's Red Bull Global RallyCross team, for which George's stepfather Sean Jones is co-owner.

George's ties to racing go deeper than that. His legendary grandfather was reportedly involved with Pat Patrick's Indy car team in the 1970s. George IV's cousin on his mother's side was the late Tony Renna, who died in a 2003 test crash at Indianapolis Motor Speedway. George's uncle is Chip Ganassi Racing engineer Chris Simmons.

"When I was very, very young, that's what I knew about racing," George said. "For a while after Tony passed away, I backed off of it a little bit. Then I rediscovered it in 2006. I watched the Indy 500 on TV and I fell in love with it. I started going to the St. Pete grand prix in 2008. Over the years, I met Bryan Herta though my stepfather."

The speed and competition stirred his passion.

He was already hooked before attending his first Indianapolis 500 in 2008. Ideally, his "end goal" of running a Verizon IndyCar Series program would be with Colton as the driver.

"Our goal is eventually to grow into an INDYCAR program along with the Andrettis, and have Colton as the driver and to win championships," George said.

"I started watching him when he was in Skip Barber," George said. "I went to his race at Lime Rock, that was the first race I ever went to of his. Once he started in F2000 (in 2014) before leaving for Europe, I was at every race, I think. We grew a connection as friends."

Michael Andretti and Bryan Herta, who merged ownership efforts this year to field Alexander Rossi and win the 100th Running of the Indianapolis 500 presented by PennGrade Motor Oil, started talking earlier this year about bringing Colton back home.

"We feel for Colton, that he'd have a better shot getting to the big cars (in the Verizon IndyCar Series), coming back over here to the U.S.," Andretti said.

"We started talking this might be a great opportunity for him to get involved with the sport," Andretti said. "One thing led to another. We turned it into a partnership now where we're basically here to try to mentor him and bring him up and get him to learn as much as he can about the sport, and hopefully turn this thing into a long-term program."

Colton grew up in Santa Clarita, Calif, in Los Angeles County. One of his fondest memories was watching his father race for what was then Andretti Green Racing with teammates Tony Kanaan, Dario Franchitti and the late Dan Wheldon. He calls them the "Dream Team."

The teenager laughs when sharing specific details about how those four drivers raced each other hard and were even harder on each other off track with some classic pranks. Because of his father's lengthy involvement with Andretti, Colton is quite comfortable at Andretti Autosport headquarters in Indianapolis.

"It's going to be awesome," Colton said. "It's cool walking around the factory here and seeing all the old faces I haven't seen for a few years. It's a great opportunity. I'm really excited to get going."

Just remember, while he's the next Herta to race, it's not about following in his father's footsteps. He's his own Herta.