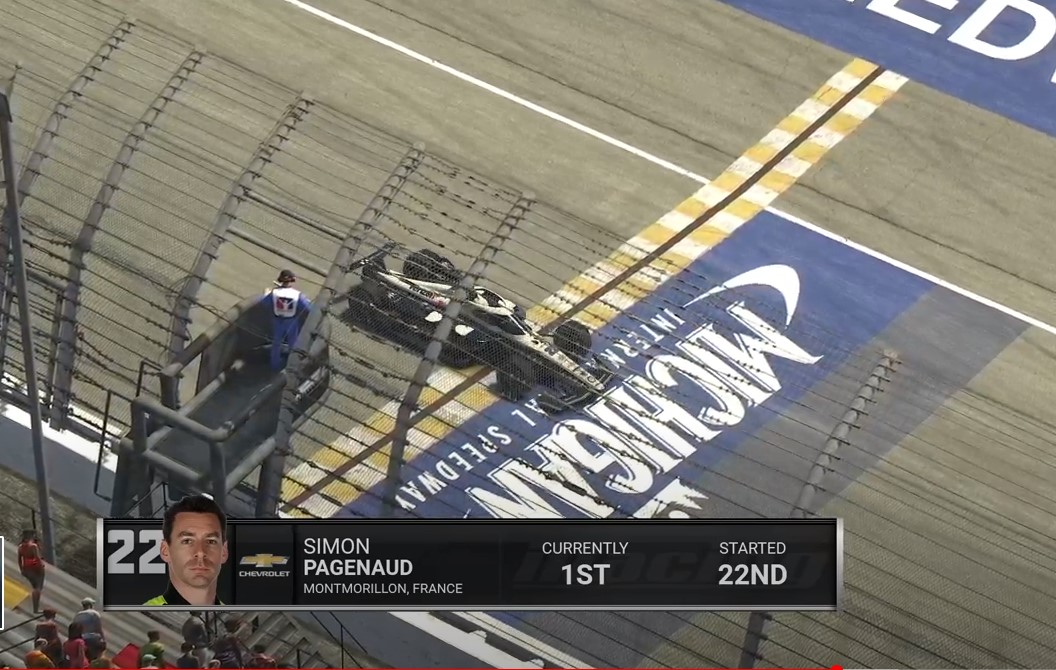 It's hard to beat Team Penske in real races as they usually outsmart the other teams and they have been doing it in iRacing too. For the 2nd week in a row Penske strategy won the race – the Chevrolet 275 at Michigan Speedway.

The top-3 finishers stretched their fuel with only one pitstop but no one did it better than 2019 Indy 500 winner Simon Pagenaud and his Penske teammate Scott McLaughlin (last week's winner) as they finished 1-2 over NASCAR hero Dale Earnhardt Jr.

Will Power and Graham Rahal rounded out the top-5.

Because of the fuel strategy used by the top-3 the finish was not as close as most of the race that saw the lead change twice every lap between Sage Karam and Will Power.

Pagenaud only led three laps but it was the three most important ones as he took his first IndyCar iRacing win for 2020.

Pagenaud started near the back after qualifying 22nd and saved fuel from the start and the strategy ended up playing the rest like a fiddle to win by over 13 seconds.

McLaughlin and Andretti Autosport's Alexander Rossi got caught up in a first lap crash that took Robert Wickens out but both got back out with McLaughlin stopping only once for fuel to finish 2nd while Rossi stopped twice and finished 7th.

Pagenaud pitted later than the early lead group and stretched the fuel in his No. 22 DXC Team Penske Chevrolet to the finish, making only one pit stop in the 85-lap race.

[adinserter name="GOOGLE AD"]Pagenaud averaged 189.463 mph for victory after starting 22nd in the 31-car field. The Chevrolet 275 was slowed by only one caution period due to a multi-car crash on the front straightaway as the field took the green flag to start the race. That pileup shifted race strategists' minds into overdrive, trying to figure the best fuel strategy.

"All credit to (strategist) Ben Bretzman and my virtual team behind me," Pagenaud said. "We worked hard to understand this kind of racing. It's a pleasure to bring the DXC car into Victory Lane this year.

"We were just saving fuel trying to stay out of trouble. At the start of the race, everybody piled up (in a crash). We were trying to avoid it. We didn't have the pace in qualifying. We qualified toward the back and decided to use option B, which was saving fuel and conserve tires."

Two-time Daytona 500 winner and NBC Sports motorsports analyst Dale Earnhardt Jr. finished third in the No. 3 Nationwide JR Motorsports Chevrolet in his series debut, using a similar fuel strategy as Pagenaud to climb through the field in the closing laps as leading cars peeled off the 2-mile oval for late pit stops.

2018 Indianapolis 500 winner and 2014 NTT INDYCAR SERIES champion Will Power finished fourth in the No. 12 Verizon Team Penske Chevrolet, his third top-four finish in the first three rounds of the series. Power and Round 1 winner Sage Karam traded the lead for most of the first half of the race but were forced to make two stops for fuel, along with most of the lead pack that snaked around the high-speed oval in lockstep for lap after lap after the early caution.

Graham Rahal rounded out the top five in the No. 15 TOTAL Honda.

Pagenaud took the front for good with three laps to go by passing Zach Veach's No. 26 Gainbridge Honda. Veach then quickly dove into the pits for a second stop, as his first stop came on Lap 43.

Kyle Kaiser, who also last pitted on Lap 43, tried to soft-shoe his throttle enough in the No. 11 Juncos Racing Chevrolet to hang on to a top-three finish late in the race. But he ran out of fuel on the last lap.

The late pit stops and thirsty cars of drivers trying to stretch their fuel to the finish helped elevate McLaughlin and Earnhardt into the top three in the final laps. McLaughlin's last pit stop in the No. 2 Snap-on Tools Dallara came on Lap 46, the same as Pagenaud, while Earnhardt's last of two stops came on Lap 45.

Earnhardt also pitted under caution on Lap 3 due to damage suffered in the race-opening crash. That extra fuel early in the race helped him stretch fuel enough to make a different kind of two-stop strategy work.

"It was a lot of fun," Earnhardt said. "We got a little damage in that wreck on the front straightaway at the start of the race. I had a real bad push in the car, so I couldn't really run with the lead pack.

"A lot of those guys were pretty ticked off about how the strategy worked out for them with that wreck on the front straightaway at the start. It took a bunch of guys down pit road and put a bunch of us in fuel-mileage mode. The fastest cars didn't win, the best sim racer today probably didn't win, but this is the closest I'll probably get to the real thing. That's why I like it."

Power and Karam wasted no time flexing their respective muscles when the race restarted on Lap 6 after the early caution period. Power took the lead from pole sitter Marcus Ericsson's No. 8 Huski Chocolate Chip Ganassi Racing Honda on the first lap after the restart, with Karam in tow.

Then Power and Karam swapped the lead eight times through Lap 40 in a wild, weaving show of precision driving and pack racing.

But running up front and trading the lead took its toll on the fuel loads and tires of Power and Karam. Karam was forced to pit on Lap 41, five laps earlier than Pagenaud, with Power following on Lap 42.

Experienced and successful sim racer Karam converted quick, smooth entry and exit laps from that stop into a lead of approximately two seconds on Power after all other cars cycled through their stops. But Power used the power of slipstreaming to pull up to Karam's rear wing by Lap 50, and their duel resumed over the next 22 laps.

Karam was forced to the pits for a second time on Lap 73 in the No. 24 DRR WIX Filters Chevrolet, with Power following him a lap later for his second stop. That promoted NTT INDYCAR SERIES rookie Alex Palou to the lead in the No. 55 Dale Coyne Racing with Team Goh Honda.

With nine laps remaining, 2012 series champion and 2014 Indianapolis 500 winner Ryan Hunter-Reay took the lead in the No. 28 DHL Honda. But Hunter-Reay, making his series debut, also was forced to pit from the lead for fuel with on Lap 81. Veach took the top spot, driving in a sim rig that featured a throttle pedal with a spring from the sewing machine of his girlfriend after the pedal's original spring failed shortly before the race started.

Today's race was the third of six events to take place every Saturday through May 2. Future venues include a "Random Draw" track April 18, Circuit of the Americas on April 25 and a non-INDYCAR "Dream" track May 2. The series opened March 28 at Watkins Glen International, with Round 2 on April 4 at Barber Motorsports Park.