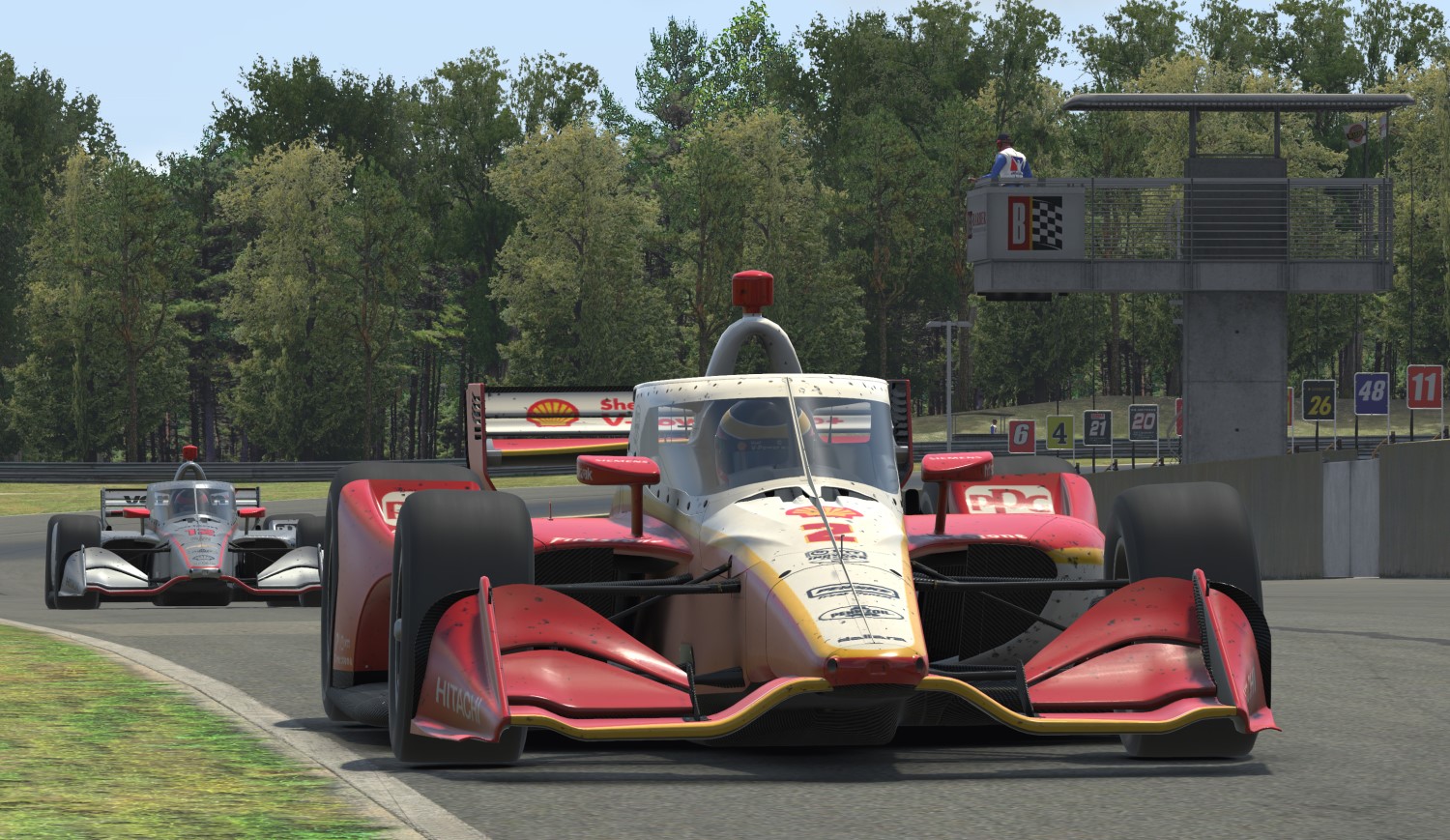 Scott Speed in the #98 Andretti Honda was third ahead of Alex Palou in 4th with Simon Pagenaud rounding out the top-5.

Polesitter Sage Karam led almost half the race but tangled with Felix Rosenqvist and did not finish.

McLaughlin and his Penske engineer made a bold strategy move to pit just before the competition yellow and then a splash and go late that put him out front.

[adinserter name="GOOGLE AD"]Felix Rosenqvist was 6th in his NTT Data Ganassi Honda, Colton Herta was 7th in his 88 Andretti Honda followed by Robert Wickens who drove a great race – his first race back after being partially paralyzed in a crash at Pocono two years ago.

Wickens started last after spinning in qualifying to come home 8th – a great result considering he had to use hand controls.

Josef Newgarden and Santino Ferrucci rounded out the top-10.

Veteran sim racer McLaughlin passed Speed with six laps remaining, diving inside in Turn 2 of the rolling, challenging 2.38-mile road course at Barber, located in Birmingham, Alabama. The circuit was scheduled to host the second event of the NTT INDYCAR SERIES season Sunday, April 5, but the event weekend was canceled due to the coronavirus pandemic.

Then the final six laps of the race crystalized into a compelling duel between New Zealand native McLaughlin, racing in the wee hours of the morning in Australia, and Australian native Power, racing from his home in North Carolina.

Power closed to within seven-tenths of a second of McLaughlin with three laps to go, that gap closing to .533 of a second with two laps remaining. Power appeared to have a chance to close on McLaughlin's gearbox as McLaughlin encountered the lapped car of five-time NTT INDYCAR SERIES champion Scott Dixon, but Dixon moved out of the racing line on the final lap to let the leaders through in a sportsmanlike gesture in his series debut.

McLaughlin maintained the gap and his composure throughout the final lap until the final corner, when a puff of virtual smoke rose from his front Firestone tires due to locking his brakes. But he quickly recovered and held off Power for the win.

"When we pitted early, we pitted into a lot of traffic and lost a lot of seconds in that sequence," Power said. "I wasn't aware that Scott (McLaughlin) was on that strategy. I actually thought Sage (Karam) was still leading.

"My engineer just said, 'Just focus on your laps: We can still win this thing.' I thought he was just, 'Come on, don't worry about anything else,' but what he was saying was, 'You need to push out some laps.' So, I think we could have made that a little more tight (at the finish), but I'm still really happy with second."

The introduction of a competition caution to the series for the first time at this race bunched the field on Lap 15 and created many more strategic options than in the series debut Saturday, March 28 at Watkins Glen International.

"It was crazy," McLaughlin said. "I was particularly nervous at the Safety Car restart after the caution. I had new tires, but a lot of people didn't in front. We got a good restart there, but it was a bit chaos."

Leader, pole sitter and Watkins Glen race winner Sage Karam pitted for the first time from the lead on Lap 25 in the No. 24 DRR WIX Filters Chevrolet, handing the top spot to 2019 NTT INDYCAR SERIES Rookie of the Year Felix Rosenqvist in the No. 10 NTT DATA Chip Ganassi Racing Honda.

Rosenqvist pitted on the next lap, and McLaughlin found himself in the lead due to his early stop.

"The biggest thing was lapped traffic, getting blocked by lap traffic," McLaughlin said. "That enabled us to get that jump in the pits because I was in clear air for a long time where others weren't. Credit to Jonathan and the strategy. He put me out in front and put me in some clear air, and I was able to bang lap times out lap after lap."

Meanwhile, Karam and Rosenqvist collided on track while dueling for position after Rosenqvist exited the pits. Karam eventually retired from the race after the collision and a subsequent tangle with a lapped car, placing 27th.

"We were looking pretty good after qualifying with another pole," Karam said. "The DRR WIX Filters Chevy was in good shape, and the pace was going our way. At the competition yellow, the car still felt good and I got good restart, too. I was stuck behind (Sebastien Bourdais) just before the pit stop and lost a lot of time. He was just blocking me. That screwed up my in lap and out lap from the pit stop. That's how Rosenqvist got in front of me after the pit stop.

"We were racing real hard and both being aggressive. He then overshot the corner. I couldn't tell if I hit him then. He was spinning, and we made contact. We were racing for the win."

McLaughlin led by 19.4 seconds on Lap 32 when he made his second and final pit stop, handing the lead to Speed. After that stop, McLaughlin had fresher Firestone tires than Speed and more than enough fuel to go the distance, so he stood on the throttle in pursuit.

By Lap 38, McLaughlin sliced Speed's lead to just 1.5 seconds before making the decisive pass for the lead on Lap 40.

The other star of the race, televised live on NBCSN, was 2018 series Rookie of the Year Robert Wickens, who finished an incredible and eventful eighth in the No. 6 Arrow McLaren SP Chevrolet.

This was Wickens' first racing competition of any kind since suffering serious injuries in a racing crash in August 2018 at Pocono Raceway. He only received his SimCraft simulator two days ago, equipped with special hand controls for throttle and brake since he has restricted use of his legs due to a spinal cord injury suffered in the crash.

Wickens spun in qualifying and started last in the 29-car field but wasted no time getting up to speed. He passed 10 cars in the opening seven laps and was up to 11th halfway through the race.

With 13 laps to go, Wickens spun into the gravel and suffered front wing damage but was able to continue from 11th place. Using a clutch paddle on his wheel for an accelerator and a separate lever for a hand brake, Wickens calmly continued to the finish for a strong top-10 result.

"It was a riot," Wickens said. "We made the bold strategy of trying to make it on one stop under yellow. That was going to be my best race, as when I was saving fuel, that was my best strategy for not spinning out. We did massive fuel save the entire time after that yellow flag, and we just made with 0.2 gallons left at the finish line. It was great teamwork.

"It was great to have the Arrow McLaren SP engineers in my ears the whole time. In a way, it felt like the real thing. I'm just excited."

Today's race was the second of six events to take place every Saturday through May 2. Future venues include the first oval event, on April 11 at Michigan International Speedway, a "Random Draw" track April 18, Circuit of the Americas on April 25 and a non-INDYCAR "Dream" track May 2. The series opened March 28 at Watkins Glen International.

Next week's race will be an oval at the 2.0-mile Michigan International Raceway