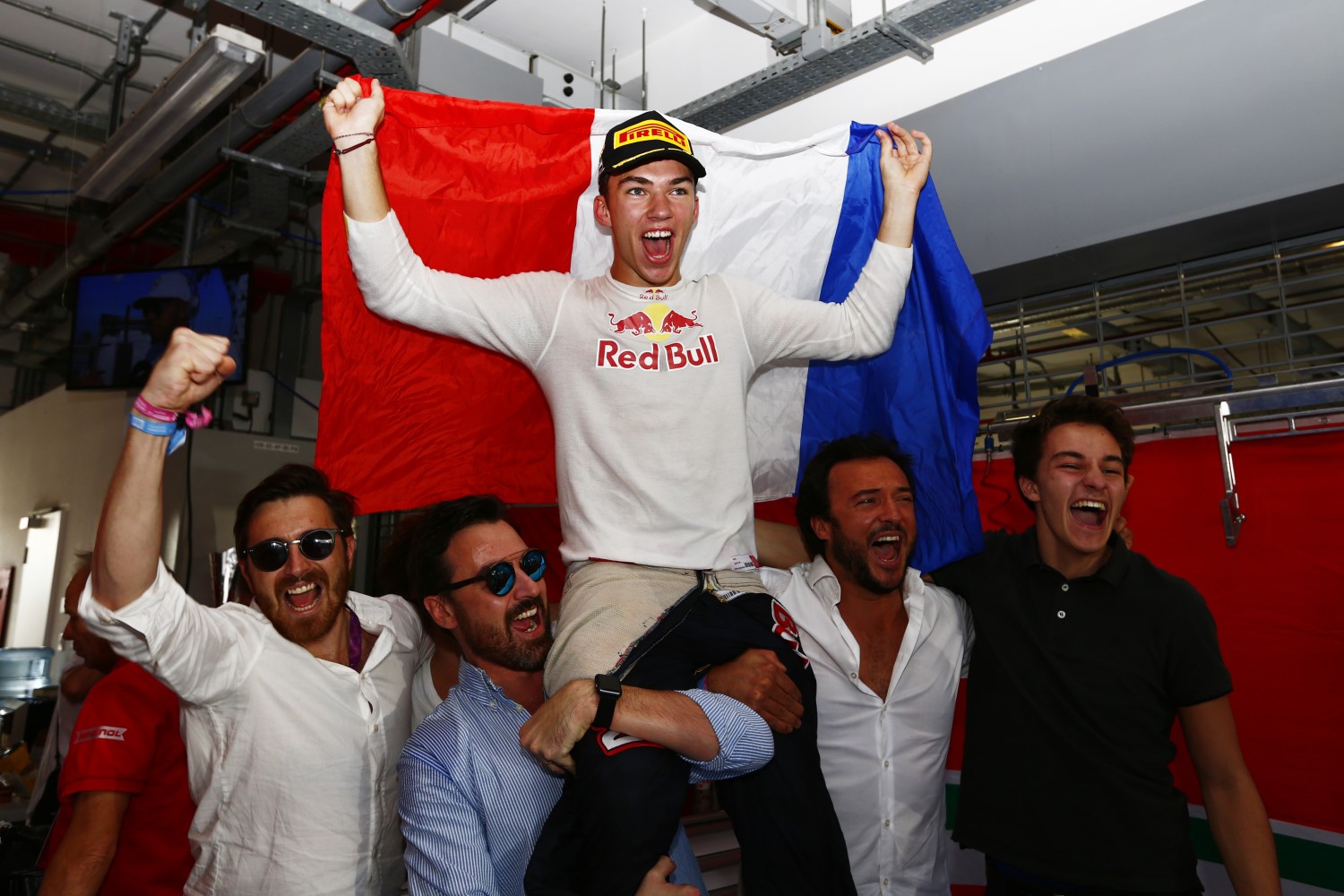 Pierre Gasly: It's amazing! I have no words to describe how I feel now: it's been such a long season, a really hard fight with many drivers, and we kept fighting to the end, and to get it at the last round is just unbelievable! The team was fantastic all season – I can't thank them enough for all of the hard work they did – it's like a big family, and I am so happy with what we have achieved. I want to say congratulations to Antonio [Giovinazzi] as well: I know he's really disappointed, but I told him that I wish him a big future because he really deserves it, he's such a talented guy and a great friend, above everything. And thanks to PREMA, my family, my friends and all supporting me, because without them nothing would have been the same.

GP2 Series: What does this title mean to you?
Pierre: It means so much, because this season has been really tough, mentally and physically: my mother was hospitalised for three months, and I had a broken vertebrae for two and a half months after Silverstone, and tough times in race like at the Red Bull Ring, where I led the race but got stuck in the gravel, or in Monza when we were first and the safety car came out, and we lost the victory, or the extinguisher in Hockenheim: honestly, I could write a book about my season! So many things happened, but we never stopped fighting: that's a great achievement to see that all the hard work paid off in the end, my team never stopped working and supporting me, and all these people helped me to win this championship.

GP2 Series: At the start of the season you were one of the favorites: did you feel any pressure from that?
Pierre: In a way it's good, because it means they expect you to perform, but after that it means that you've got to deliver, which is not easy at this level because there are so many talented guys: there are many who can take a pole or win a race here, so it wasn't easy! But in the team I felt so good, and in the car also, and finally I've managed to do it, but without the people in this team it would have been different: they supported me, even here when I was fighting for the title with Antonio, every single person in the team supported both of us, and it's a really good feeling to be part of such a team, and getting this title is the best way to thank all of them.

GP2 Series: It was a tough season, and certainly Silverstone was a turning point given the accident for your mother and you: was there any time where you started to doubt it would happen?
Pierre: No, we started really well with a pole at the first race and knew straight away we had the pace, and afterwards we were trying to get all the pieces of the puzzle together. It was the first season for the team, and the first time I've worked with them, and we had to get used to working together and what we needed. We had a few races to put everything in place – the performance was always good, but we missed something to get the victory – but I could feel the potential for it and we keep working for it, and I knew it would come at some point. It was a really tough moment in the Red Bull Ring when I was leading and went off and I thought it doesn't want to come [laughs], but it gave me motivation to be so close, because at this level you have to improve in every detail, everything makes a difference, and that's what I've tried to do all season, and in the end it paid off.

GP2 Series: Is there any race that you will always remember from this season?
Pierre: Silverstone was really emotional for me, so many emotions that I will always remember, but for me Spa was a crazy race, the closest race to my home so I had so many people there to see me, to support me, and I won the race, which was mega! In the second race I enjoyed it because I had really nice battles and good overtaking, which is what we like in a race. For me it's difficult to realise that I have the title, and also that it means I won't race in GP2 anymore, which is quite tough for me: I only spent 2 years here, but I know more or less everyone in the paddock, and I will always remember those 2 years in this paddock. It's a mega Series, and I will miss it a lot!

GP2 Series: And we'll miss you too! So, what now?
Pierre: What now? That's a good question! As I said to Helmut [Marko], my only goal is to get into Formula One, so I will always keep pushing for that, but of course you always need an opportunity. We will see what happens: at the moment I don't know, and it is wide open, but you can be sure that I will keep pushing with everything to get into Formula One, and we'll see what happens.