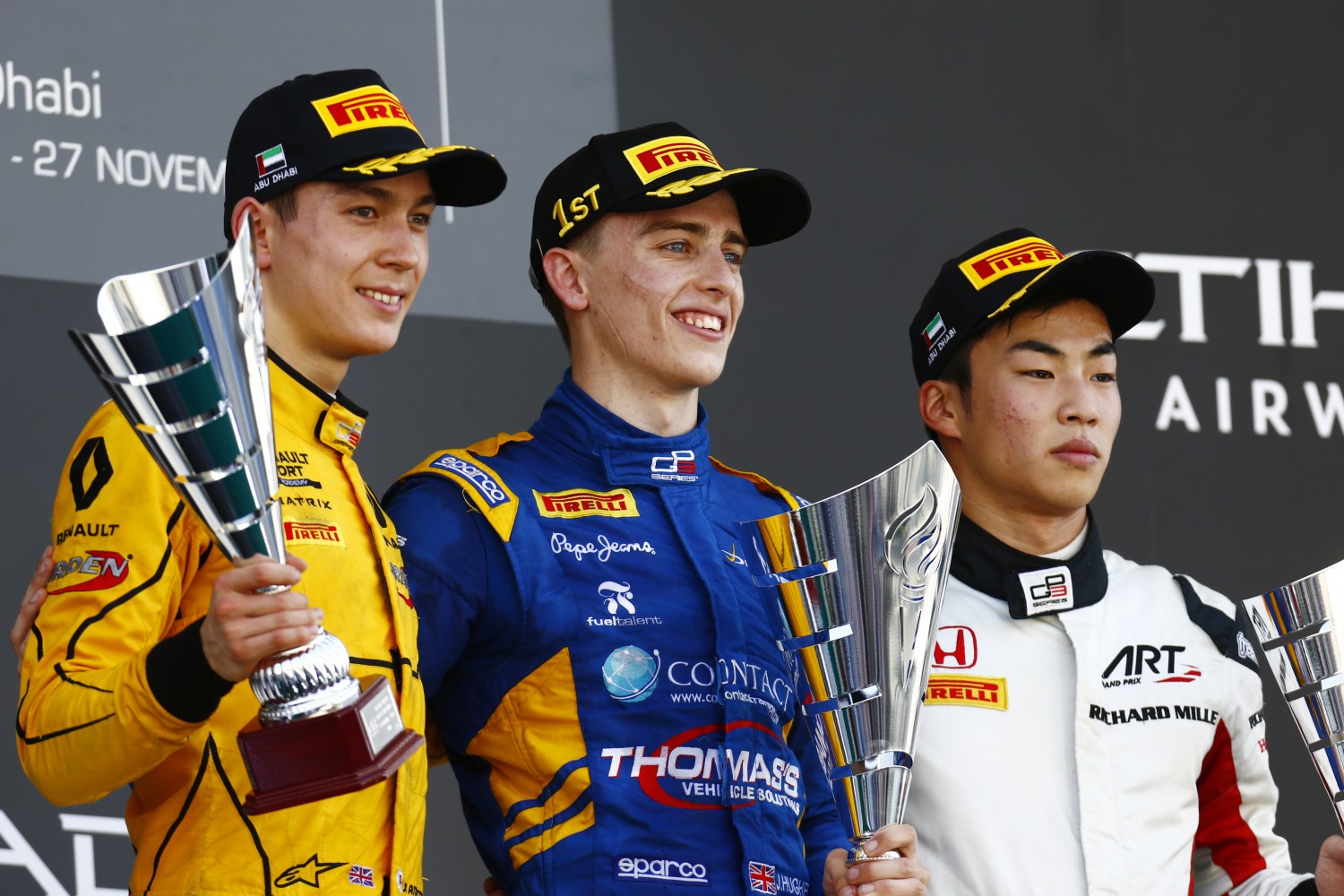 What a turnaround for Jake Hughes: After a disastrous start to the weekend, the DAMS rookie started yesterday’s Race 1 from the pitlane and fought back to earn himself a front row start for the final race of the season. The Briton was opportunistic on the inside of Turn 1 and remained unchallenged until the checkered flag. Arden International’s and Renault Academy’s Jack Aitken was second with ART Grand Prix and Honda’s Nirei Fukuzumi completing the podium.

Campos Racing’s Konstantin Tereschenko started from reverse pole and made a good getaway but Fukuzumi from P4 made an even better one to jump into the lead. The Japanese driver ran slightly wide into T1 with Tereschenko and Alex Palou on the outside of him. While the trio were busy battling, Hughes dived down the inside to take the lead. Tereschenko dropped to P7, while Aitken jumped up into P2.

An early safety car was deployed after there was wheel to wheel contact between Alexander Albon and Tatiana Calderon. The pair both retired and it concluded a sad weekend for the ART star after his sterling efforts through-out the season to be in the title hunt until the final round. The safety car came in at the end of lap three as Hughes led Aitken and Fukuzumi. Meanwhile the Campos Racing trio were providing loads of entertainment: firstly Alex Palou passed Steijn Schothorst and then Tereschenko also got the job done on his teammate with an audacious move.

Our newly crowned GP3 Champion Charles Leclerc started in P17, he began carving his way through the pack and looked like a man on a mission as he moved into the top ten by the first half of the race. Antonio Fuoco was also slicing his way through the field; he attempted a pass on Race 1 winner Nyck De Vries but the door was shut. The Italian continued to attack the Dutchman for P11 but had to bail out and run wide. The Trident driver then had to give the position back to the ART driver after gaining it via track limits and was issued with a 5s time penalty for causing a collision.

At the front, Hughes had built up a 2.8s margin over Aitken with Fukuzumi and Dennis hot on the Briton’s heels for second position. Leclerc was also looking racy as he was all over Kevin Joerg for the final point on offer. He attempted a brave manoeurve around the outside of the Swiss rookie but Joerg fought back to re-claim P8.

The tussle between De Vries and Fuoco was still not over as the pair ran side-by-side with the Ferrari Driver Academy finally getting passed the Dutchman in a titanic tussle. The Trident driver dropped down the order after his time penalty was applied at the end of the race. On the final lap, Dennis began harassing Fukuzumi for the final rostrum position but the Honda protege withstood the pressure to claim another podium.

But the race belonged to Hughes who took the checkered flag and his second victory by 2.8s. Aitken pocketed yet another podium finish, with Fukuzumi happy to be back on the rostrum. Dennis had to settle for fourth ahead of the Campos trio led by Palou who crossed the line ahead of Tereschenko by the smallest or margins. The Russian driver achieved his career best in the Series. Schothorst finished P7 ahead of Joerg who was able to resist the best efforts of GP3 Champion Leclerc. The Monegasque celebrated his title on track in P9 ahead of Giuliano Alesi who equaled his best result.

The battle for the GP3 crown was won yesterday but following the non-score for both Albon and Fuoco; the Thai and Italian racer finished both second and third respectively in the drivers’ standings. ART GP clinched the Team Champions’ trophy back in Sepang ahead of Arden International in second and Trident in third

The season may be over but there is more action just around the corner. The teams remain at Yas Marina Circuit for a three day post-season test next week on Nov 30 – Dec 02 2016.

*5s time penalty for forcing another driver off track