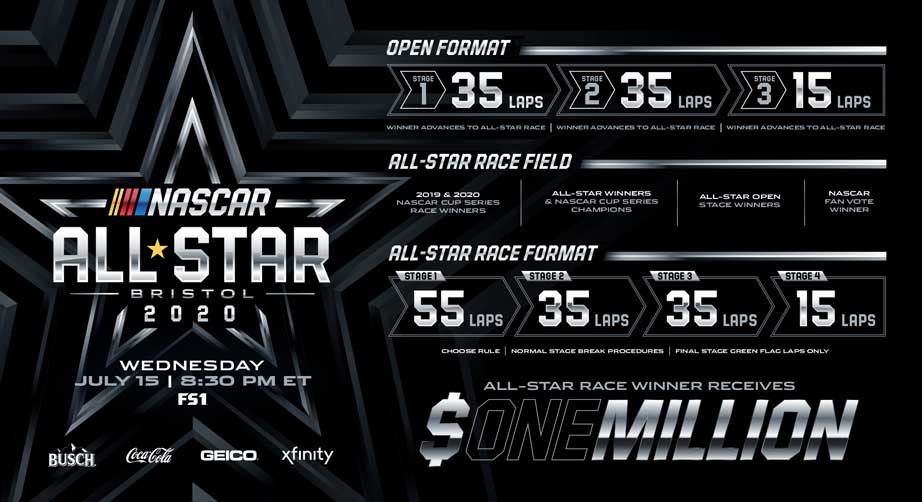 NASCAR announced Wednesday that the format for the July 15 All-Star Race and All-Star Open at Bristol Motor Speedway will include a choose rule, revealing the change on FOX Sports 1’s Race Hub.

Here’s how the choose rule works: When drivers approach a designated spot on the track, they must commit to the inside or outside lane for the restart. Failure to make a clear choice or changing lanes after the designated spot will result in a tail-of-the-field penalty.

This is different from the current double-file restart system, where only the race leader chooses his lane. Having the rule for the All-Star Race gives every driver the ability to make his own decision, and strategy will come into play in every instance.

The choose rule has been used at short tracks on the grassroots levels of racing, and NASCAR drivers were among those discussing the possibility of trying it in the Cup Series. The sanctioning body decided the All-Star event was the perfect chance to do just that.

“There has already been an incredible amount of buzz around this year’s NASCAR All-Star Race with the move to Bristol Motor Speedway," said Steve O’Donnell, NASCAR executive vice president and chief racing development officer. “In addition to the thrilling racing we’re used to seeing at Bristol, the choose rule is going to add another dynamic to the race. Drivers and fans have been asking for this change and I can’t think of a better time to try it than the All-Star Race."

Other highlights of the All-Star format:

— The All-Star Race main event will have four stages with Stage 1 lasting 55 laps, Stage 2 and Stage 3 being 35 laps apiece and Stage 4 lasting 15 laps. Only green-flag laps will count in the final stage, and the final stage will end with a checkered flag. If the race is restarted with two or fewer laps remaining, then there will be unlimited attempts at a green-white-checkered finish.

— Car numbers will appear farther back on the side panels of the cars. Instead of being in the center of the door panel, the number will now be more toward the back fender.

— Standard strategy rules apply: Pit road will open under caution and at the stage breaks. Teams may stay out, take two tires, take four tires, etc., per normal race procedures. The lineup after stage breaks or cautions will be cars that stayed out followed by cars in order off pit road.

“This NASCAR All-Star Race under the bright lights of Bristol is setting up to be a memorable event for ages to come," said Jerry Caldwell,, executive vice president and general manager of Bristol Motor Speedway. “With a million dollar payout and no championship points on the line in this all out high-banked short track clash, it’s surely going to be a race that fans will not want to miss."

Lineups will be set as follows: