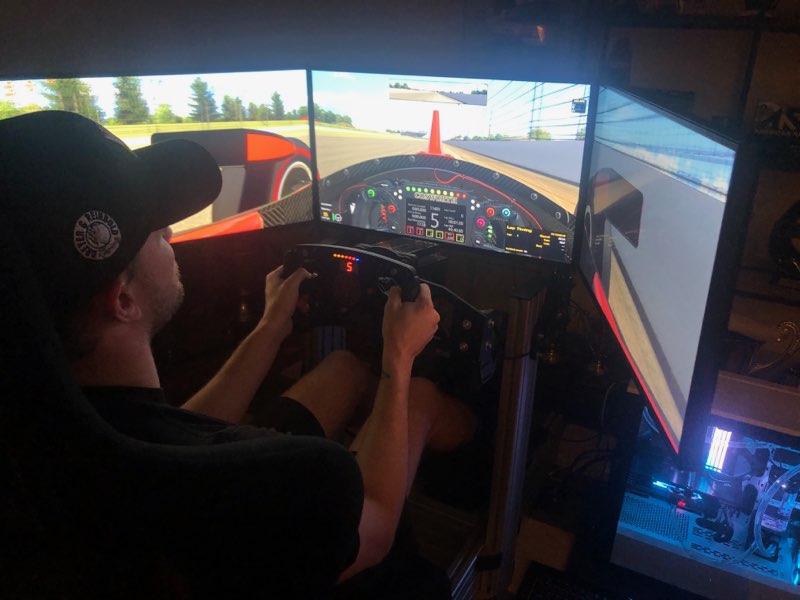 The race is the first of 6 races scheduled to fill the gap due to the Coronavirus postponing the start of the real IndyCar season.

Penske drivers Will Power and Scott McLaughlin were 3rd and 4th while Ganassi Racing rookie Oliver Askew rounded out the top-5.

Karam started from pole and led every lap (except for pit stops) with Rosenqvist always within 2 to 3 seconds back.

Karam, a serious SIM racer, always managed to open the gap back out to 3 seconds whenever the Swede would start to close up.

[adinserter name="GOOGLE AD"]Karam’s victory was his first in INDYCAR – virtual or otherwise. The champion of the 2013 Indy Lights presented by Cooper Tires season has made only 19 actual NTT starts over six seasons, scoring a career-best third at Iowa Speedway in 2015.

“It was nerve-wracking there at the end, for sure," he said in reference to a late-race near-miss with Indy Pro 2000 champion Kyle Kirkwood, who was subbing for Andretti Autosport’s Ryan Hunter-Reay in the No. 28 DHL Honda. “That was a little too close for comfort (in Turn 10), a (scary) moment. I didn’t know which way he was going to go when he started to spin, so I had to quick rely on some instincts and picked ‘left’ and thankfully it was the right choice."

Karam, one of the most experienced iRacing drivers in this field, applauded his competitors for investing the necessary practice time this week to make the inaugural online show entertaining for the fans.

“It was a lot of fun, and it was great that we could give the fans something to watch," he said. “It’s the only sport that (the world) can really do right now."

The virtual event featured most of the NTT INDYCAR SERIES drivers expecting to be in the midst of the actual season had the pandemic not occurred. The upside of being able to stage such an event: It allowed seven-time NASCAR Cup champion Jimmie Johnson and two-time Virgin Australia Supercars champion Scott McLaughlin to participate.

Johnson, who has eyes on INDYCAR road racing in the future, started ninth and ran well in his first INDYCAR attempt despite having a couple of incidents. He was collected in the first-lap accident that included Andretti Autosport’s Alexander Rossi (No. 27 AutoNation/NAPA AUTO PARTS Honda), among others. Then on Lap 34, Johnson’s car drifted wide exiting the track’s famed “bus stop" section and hit the outside wall. He finished 16th.

The second of six events will be held Saturday, April 4 on the Barber Motorsports Park circuit. The event will be held at 4 p.m. ET and streamed through INDYCAR.com while INDYCAR’s YouTube and Facebook platforms as well as iRacing’s Twitch will serve as additional outlets for viewing.

Future events will be held weekly each Saturday through May 2 at the following sites: a “Driver’s Choice" track (April 11), a “Random Draw" track (April 18), Circuit of The Americas (April 25) and a non-INDYCAR “Dream" track (May 2).