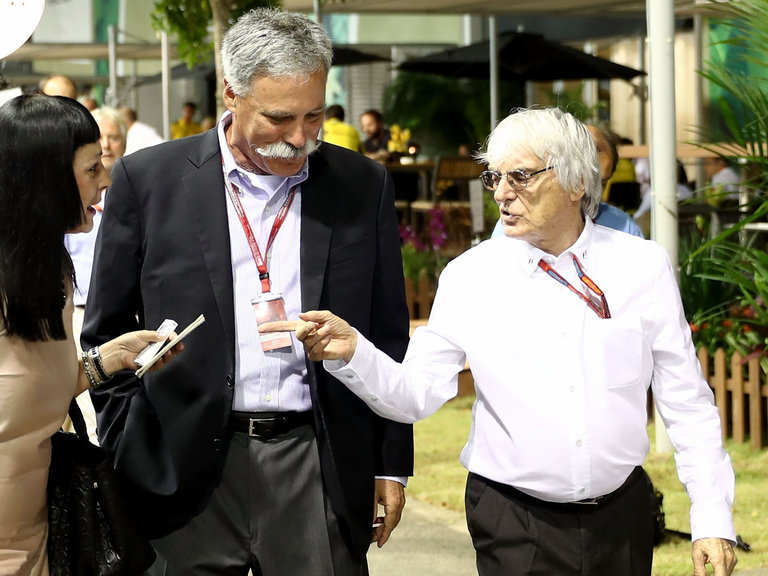 Formula 1's new chairman Chase Carey has promised to bring the sport the leadership it needs to be taken "to another level", as he suggested it should not be run by a dictatorship writes Jonathan Noble of Motorsport.com.

Carey attended his first race at the Singapore Grand Prix but, despite coming from a media background, steered clear of actually speaking to the media at length to explain his vision.

It was also intriguing that he spent much of his time away from F1 supremo Bernie Ecclestone, amid suggestions that the pair may have different views on the direction the sport should be heading.

In quotes posted on the official F1 website, Carey was clear that he had a vision of grand prix racing being run in a manner that would yield bigger results in the future.

Speaking about his interest in the job, Carey said: "It sounded interesting and I thought that I could make a difference in a business that has real opportunities – there was an opportunity to do something really special.

"With all credit to Bernie, he's had enormous success – the world admires Bernie for the business that he has built.

"But I still think that there is another level that we can take Formula 1 to. That is the opportunity that excited me when it was presented to me."

"There have to be compromises"

Ecclestone has long single-handedly controlled the way that F1 is run, which will make it intriguing to see how his working relationship with Carey pans out.

And in comments that were perhaps aimed at the way F1 has been overseen, Carey suggested that having one man choosing everything was not the right way.

"You cannot make everybody happy all the time, but you've got to understand what everybody wants and then find a path," he said. "Sure, that is not a task for a committee, as committees tend to become bureaucratic – but there also can't be a dictatorship, even if probably here they are used to it.

"They need leadership, and leadership means that you create a vision to achieve the right goals for the future. Successful businesses are built on successful leadership that understands what every party wants – and yes, there are a lot of parties involved in Formula 1.

"There have to be compromises. You can't make everybody completely happy, but you want hopefully [to] make everybody happy enough to believe and ultimately sign on that it's the right direction for the sport as a whole."

Carey has also promised that new shareholders Liberty Media will invest in the sport to help drive the sport's profits, as well as hinted as American races in Miami, Los Angeles or New York.

"It is too early to have a clear plan, but we clearly will have a plan to develop America, to be in the right market," he explained.

"Formula 1 is a great premium brand and that means to me that you want to be at a location like Los Angeles, New York or Miami. Ideally in the great cities in the world!" Jonathan Noble/Motorsport.com