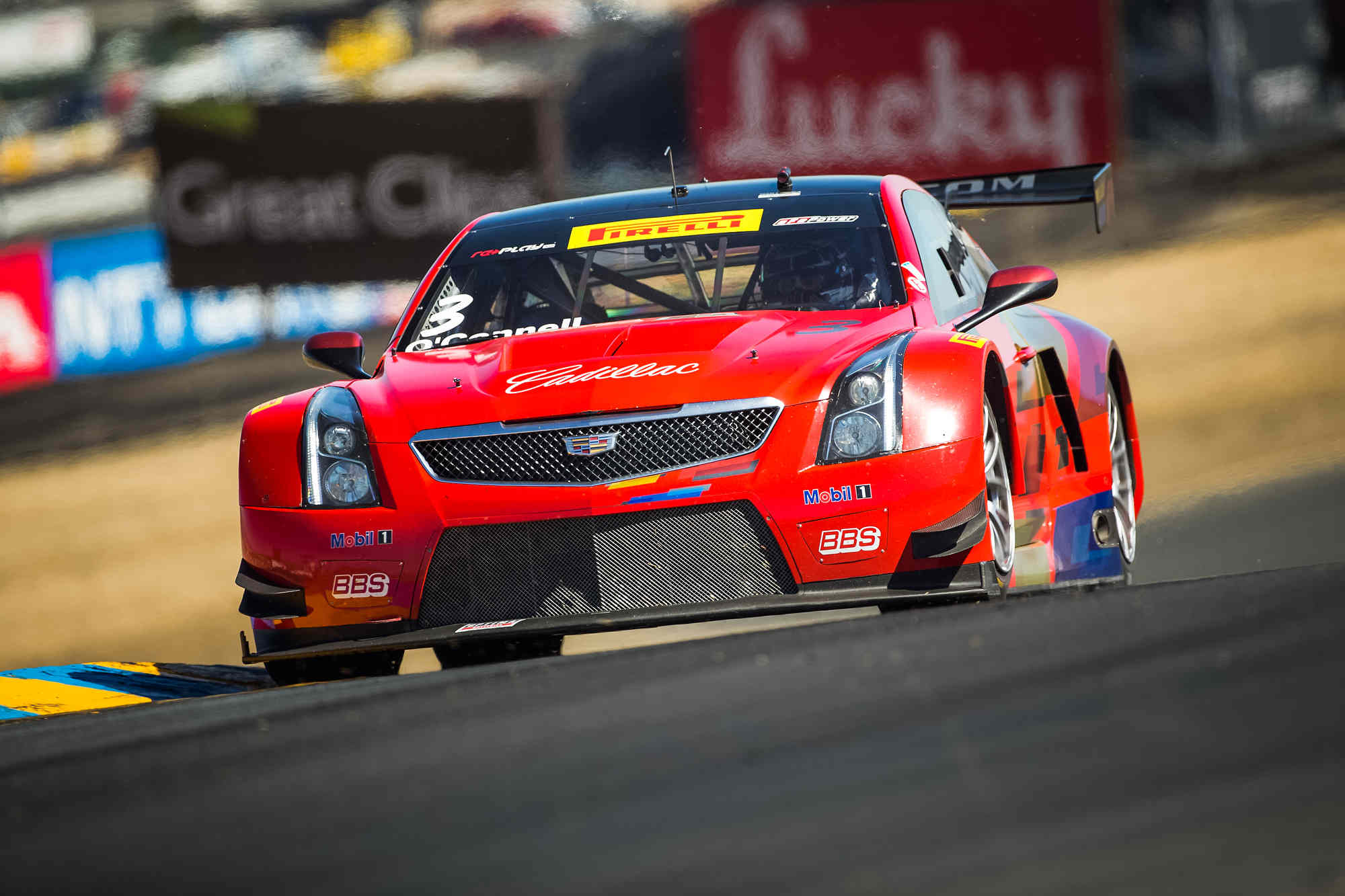 O'Connell, the sports car legend driving the No. 3 Cadillac Racing Cadillac ATS-V.R., started third behind K-PAX Racing McLaren 650S teammates Austin Cindric and Alvaro Parente at the drop of the green flag. But Johnny slid his Cadillac inside Cindric into turn one and took the lead up the hill into turn two.

O'Connell then jumped out to a 4.6-second advantage by lap three and ultimately extended his gap to 11.386 seconds at the checkered flag in the 31-lap GT main event at the 2.38-mile, 12-turn permanent road circuit north of San Francisco. Few drivers have as much experience at Sonoma Raceway as O'Connell, who served as a driving instructor at the Sonoma facility decades ago in the Bob Bondurant Driving School.

Since then O'Connell has established one of the U.S.' greatest sports car resumes including recording his 61st win in a General Motors race car. Sunday's victory was the 20th in Pirelli World Challenge competition in 98 starts. O'Connell won the GT drivers' championship in 2012, 2013, 2014 and 2015.

"My eyes were like a laser on the starter and the second his hand started to move, I went," said O'Connell. “I timed that just about perfect. The speed for the start is supposed to be around 45 miles per hour and we have been running it a little lower. And that allowed me that quick shot out for the start. Then, once I got inside of Austin (Cindric) in turn one, I have been around this place enough to know what I had to do. I then saw there was little bit of monkey business on the first lap behind me and opened the gap as quickly as I could. I then wanted to take care of my tires. I knew that I had a good gap right after the first or second lap, and that was a huge luxury."

The GT action behind O'Connell was wild early in the race with veteran sports car racer Jon Fogarty of Bend, Ore., having his No. 99 GAINSCO Auto Insurance hit in the carousel and spun around on the first lap. Several GT drivers were involved in the mishap including two-time 2016 winner Michael Cooper of Syosset, N.Y., in the No. 8 Cadillac Racing Cadillac ATS-V.R. and Adderly Fong of Hong Kong in the No. 88 Team Absolute Bentley Continental GT3.

The drive of the day in the GT event was by 2011 GT champion Patrick Long of Manhattan Beach, Calif., who started 14th in the No. 58 Wright Motorsports Porsche 911 GT3 R. Long, a three-time 2016 winner, gained ten positions to finish fourth Sunday.

Schein, Long's teammate in the No. 16 Wright Motorsports Porsche 911 GT3 R, posted his eighth 2016 win in the GTA (Amateur) class with an impressive win over Andrew Kim of Seoul, South Korea, in the No. 78 Team Absolute Bentley Continental GT3 and college student Cooper MacNeil of Hinsdale, Ill., in the No. 79 WeatherTech/Alex Job Racing Porsche 911 GT3 R.

"I got a good start today but I saw cars and dust in the carousel and Fogarty was parked in the middle of the track," said Schein. “I had to check up and slow through that area, but I was able to make a move on the outside in turn seven and passed some cars. Once I was in the GTA lead, I noticed that the car was much better today than Saturday. Then I was able to hit my marks and open up a gap. It is great having Pat onboard with the Wright team. Having a guy with his knowledge and experience is a great advantage and great stuff can come from it. We are good buddies and we have gelled together this year."

In the GT Cup division, Udell drove his No. 17 GMG Porsche 911 GT3 Cup car to a 12th 2016 victory in another sensational performance for the Clemson University mechanical engineering student. Udell battled with his season-long rival Sloan Urry of Salt Lake City, Utah, in the No. 20 TruSpeed Autosport Porsche 911 GT3 Cup before winning by five seconds. Third place went to Mike Hedlund of Redwood City, Calif., in the No. 35 Flying Lizard Motorsports Porsche 911 GT3 Cup.

"I got a two second gap on Sloan early in the race," said Udell. “I was able to hold that advantage for about 40 minutes. Then, at the end of the race, a bunch of the GT cars were coming through our race and I was a little bit better at conserving my tires. So the gap got bigger and I was able to run harder in the last five minutes of the race. It was a great season for GMG and myself and I'm hoping to move into the GT division next year. I have tested a few times in the Porsche 911 GT3 R and I'm excited to run that car in the future."

Other race awards and recognitions were determined as follows:

The Optima Batteries Best Start award was given to GT No. 13 Colin Thompson in the K-PAX Racing McLaren 650S GT3 for a seven position gain at the start of the race.

The Cadillac Move of the Race was determined to be GT No. 58 Patrick Long's passing move on Michael Lewis (GT No.98) in Turn 8.

The KIA Turning Point was determined to be the first lap incident between GT No. 8 Michael Cooper and GT No. 88 Adderly Fong for its implication on the GT points championship.

The VP Racing Fuels Hard Charger award was given to GT No. 58 Patrick Long for his ten position gain throughout the race.

MotorTrendOnDemand.com Clean Pass Award was given to GT No. 58 Patrick Long for his pass of GT No. 33 JD Davison in turn 11.

GT rounds from Sonoma Raceway premiere on CBS Sports Network on Sunday, September 25th, 2016 at 4:00 pm EDT; check your local listings for channel and alternate broadcasts. The 2016 championships close out with the season finale rounds at MAZDA Raceway Laguna Seca on October 7-9, 2016.