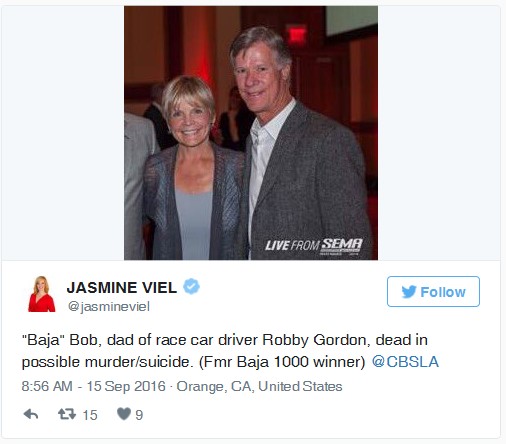 Law enforcement tells us … the knife was collected as evidence from the scene. Cops say the significance of its discovery is unclear at this moment. TMZ.com

09/15/16 The father of NASCAR superstar Robby Gordon strangled his wife Sharon and then shot himself in a murder suicide at their Orange County, CA home … officials say.

The Orange County Coroner’s Office describes the death of Robert Gordon as being consistent with a self-inflicted gunshot wound and the death of Sharon Gordon was a result of strangulation.

Cops say a rifle was recovered inside the house. TMZ.com

The father and stepmother of NASCAR driver Robby Gordon were found dead inside an upscale California home — and detectives were investigating the possibility of a murder-suicide, according to reports.

Robert "Baja Bob" Gordon, 69, and his wife, Sharon, 57, were found inside the home in Orange — about 30 miles from downtown Los Angeles — around 5 p.m. Wednesday, authorities said.

A weapon was found at the scene and police do not believe a suspect is at large, officials said.

The cause of death was not immediately clear but one investigator said they might be dealing with a murder-suicide.

09/15/16 AR1.com has confirmed that it was the parents of driver Robby Gordon and Beccy Gordon, who is married to IndyCar driver Ryan Hunter-Reay. Our condolences to both.

09/15/16 ORANGE (CBSLA.com) — Two bodies were discovered Wednesday inside an upscale home in Orange, CA are believed to be the parents of Robby Gordon.

The bodies were discovered around 5 p.m. in a home located in the 1400 block of N. Kennymead., authorities said.

It was unclear how the two people died.

Authorities described the victims as a 68-year-old male and a 67-year-old female.

Police received a call from a neighbor who was doing a welfare check on behalf of family members.

Police told CBS2’s Stacey Butler that they believe they are dealing with a murder-suicide.

Authorities would not identify the couple but neighbors told Butler the couple who lived inside were the parents of former NASCAR driver Robby Gordon.