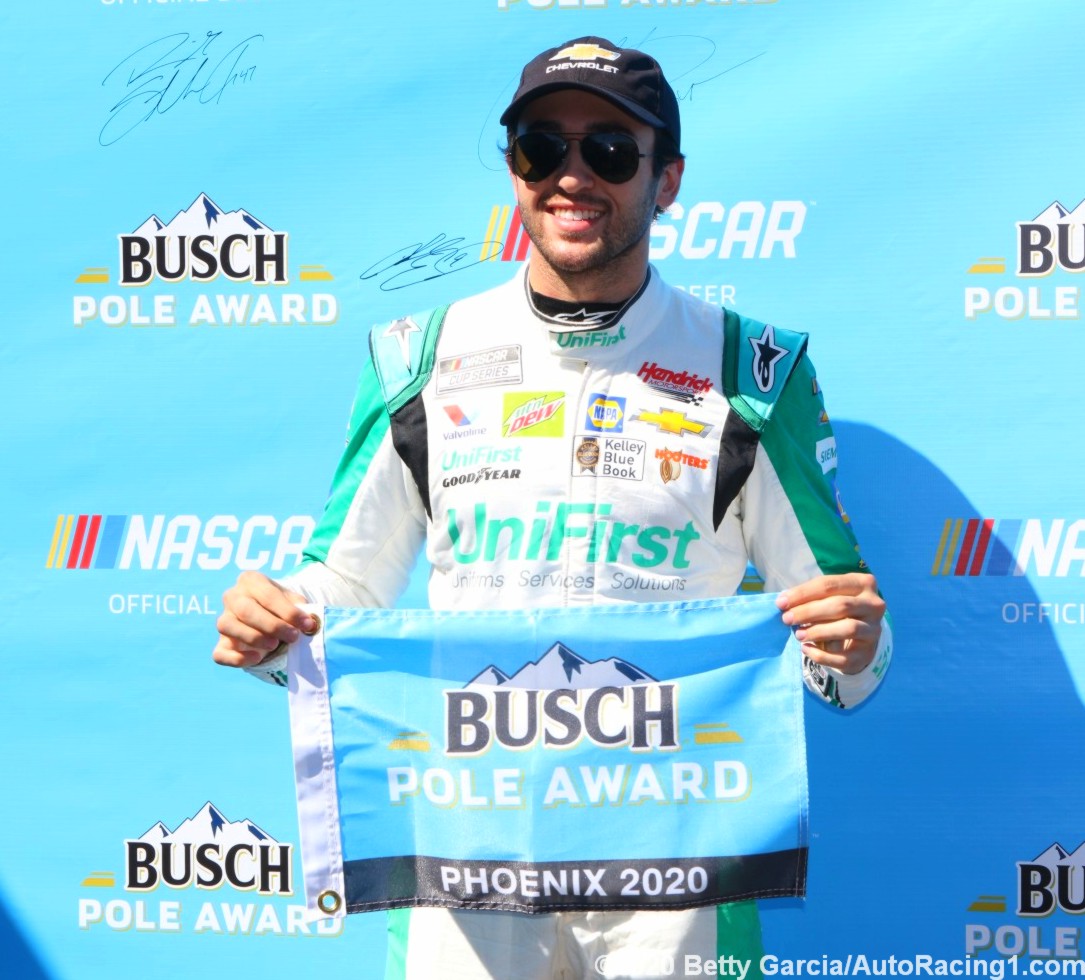 “Kevin kind of made the top work, and I think after everyone saw that, they moved up," said Elliott, who earned his first Busch Pole Award of the season, his first at Phoenix and the ninth of his career. “It’s great to get a pole. We’ve got different colors this week with (sponsor) UniFirst on our Camaro. I’m excited to grab them a pole.

“It’s always exciting when you can put down a fast lap. Hopefully, (Sunday) goes good — that’s always the challenge. We’ll see, and I’m looking forward to it."

[adinserter name="GOOGLE AD"]Elliott and Harvick will line up on the front row for Sunday’s FanShield 500 (3:30 p.m. ET on FOX, MRN and SiriusXM NASCAR Radio). Denny Hamlin (137.841 mph) and Kyle Larson (137.604 mph) will start third and fourth, respectively, in the conclusion to the three-race West Coast swing.

Qualifying near the front at Phoenix is nothing new to Elliott, who will start within the top 10 for the eighth straight race at the 1-mile mile track and on the front row for the third time in the last four events here.

Finishing races at Phoenix has proven another matter entirely for the driver of the No. 9 Hendrick Motorsports Chevrolet. Contrast Elliott’s average starting position of 5.5 to his average finish of 13.8.

Phoenix, on the other hand, has perhaps done more to cement Harvick’s reputation as “The Closer" than any other track. Harvick will start Sunday’s race trying to extend a streak of 13 straight top 10s in the Sonoran Desert, a string that includes six victories. All told, Harvick has won nine times at Phoenix.

“It was close," said Harvick, who did not make a mock run in either of Friday’s practice sessions. “I probably didn’t have quite enough confidence on the first lap that I should have had in it. The guys did a great job.

“Not doing a qualifying lap in practice, we just worked on our race stuff, and we were kind of winging it right there as to what we thought was right, and it worked out OK."

Notes: Elliott qualified for next year’s Busch Clash, which will be run on Daytona International Speedway’s road course for the first time. … Martin Truex Jr. posted the 12th-fastest lap but will start from the rear of the field for the second straight week because of an engine change. At Auto Club, Truex was also sent to the back of the field after his car failed inspection three times.