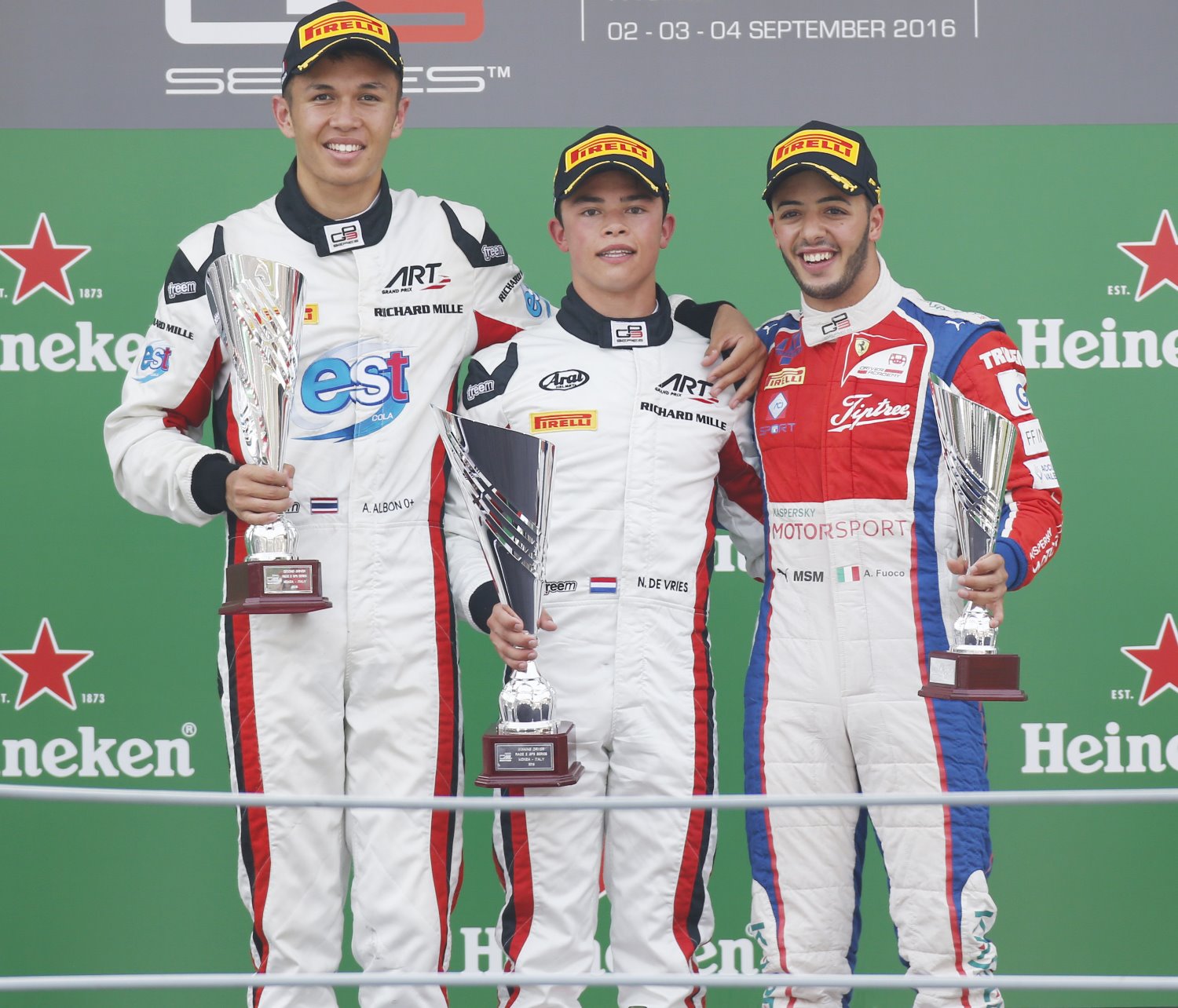 After showing sterling consistency all season, McLaren protege and ART Grand Prix rookie Nyck de Vries, was delighted to record his maiden win in the GP3 Series at the Autodromo Nazionale Monza for Race 2. After starting from the front row, the Dutchman passed his teammate Alexander Albon for the lead of the race on lap 6. Albon finished second ahead of Trident and Ferrari Driver Academy’s Antonio Fuoco.

Fuoco started his home race from reverse pole and retained P1 at the start with Albon up to second ahead of De Vries. On the second lap, the Thai racer passed the Italian for the lead of the race at Turn 1. Shortly after, De Vries and Nirei Fukuzumi also overtook the Trident driver, but Fuoco fought back to fourth place passing the Japanese driver.

There was contact between Series leader Charles Leclerc and Fukuzumi, with the ART pair both retiring from strong point positions. The safety car was briefly deployed following the incident to tow the cars away. Tatiana Calderon was also caught up in the accident and she had to pit for a new front nose cone.

Once the race resumed, Albon led De Vries, Fuoco, Race 1 winner Jake Dennis and Jack Aitken. On lap six, De Vries challenged his teammate for the lead of the race and marched into P1. The Dutchman built a small margin back to the Thai driver of half a second.

There was a titanic tussle for sixth place between Alex Palou and Sandy Stuvik, with the Trident driver passing the Spaniard after a superb battle. However, the Campos Racing ace wasn’t ready to give up that easily and reclaimed P6. Jenzer Motorsport’s Arjun Maini also decided to join in the fun.

Aitken had a look at his teammate Dennis on the penultimate lap but had to run wide at T1 and lost ground. Meanwhile, De Vries’ lead was up to almost 2s as he continued to lead the field. Maini saved the best until last when he passed Palou on the final lap to grab sixth place.

At the checkered flag, the race belonged to De Vries who drove a mature and confident race to pocket his maiden victory. Albon finished in second ahead of Fuoco, Dennis, Aitken, Maini, Palou and Artur Janosz.

Leclerc now holds a 24 point advantage in the drivers’ standings over Fuoco with Albon in third. ART GP was crowned Team Champion’ after Race 1 with Arden International and Trident completing the top three.

GP3 is back in action at the end of the month when the Series makes its maiden visit to Sepang in Malaysia on September 30th – October 2nd 2016.

** 5s time penalty for speeding in the pitlane